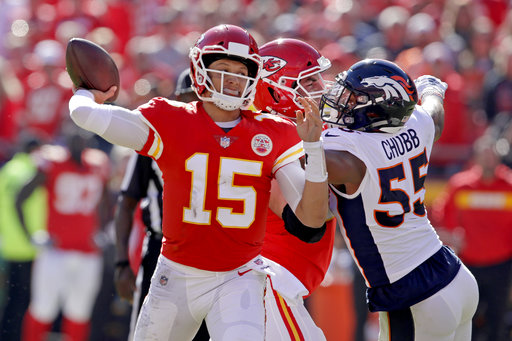 BEREA — Baker Mayfield and Patrick Mahomes will be forever linked.

They were underappreciated and under-recruited high school quarterbacks in Texas, then Mayfield helped lure Mahomes to Texas Tech with videogames and a steak dinner before transferring to Oklahoma, unhappy with his place on the depth chart. They reconnected for one of the most memorable games in college football history, the Sooners’ 66-59 win over the Red Raiders in 2016.

They’ve fulfilled their dreams by becoming NFL starters, but that doesn’t tell the complete story. Mahomes is an MVP candidate in his second season — first as a starter — and has the Chiefs (7-1) looking like a legitimate Super Bowl contender. Mayfield has lost three straight for the first time in his career, is near the bottom of the league rankings in several categories and just watched his coach and offensive coordinator get fired Monday. They will reunite Sunday at FirstEnergy Stadium in what looks like a mismatch.

Mayfield calls firings his “welcome to the business” moment.

No one knows where they’ll go from here, but the future holds great promise. Rivals fighting for conference championships and MVPs has been done before.

“Well, I would absolutely not say that it’s going to be (Tom) Brady-(Peyton) Manning right now,” Mayfield said Wednesday when asked a question referring to the generation’s greatest quarterback rivalry. “But that’s humbling to be in that conversation.

“We’ll see. If he keeps playing that way, there’s no reason why it wouldn’t be on his side of things and now I’ve just got to pick up my side and play better.”

Mahomes has completed 65.6 percent for 2,526 yards (first in the league), 26 touchdowns (first), six interceptions and a 115.3 rating (fourth). With athleticism and a huge arm, he’s made highlight plays from inside and outside the pocket.

In 5½ games Mayfield is at 58.3 percent (31st) with 1,471 yards, eight touchdowns, six interceptions and a 78.9 rating (29th). He hasn’t been supported with the same elite play calling and playmakers.

“Baker is an awesome dude,” Mahomes said on a conference call. “He is a great leader, and he has a ton of passion.

“His talent is through the roof. He is going to keep getting better every single week. He has already had a lot of success. The sky is the limit for him.”

In an alternate universe in which Sashi Brown and Hue Jackson didn’t make the decisions in the 2017 draft, Mahomes is the Browns quarterback and Mayfield and his Heisman Trophy are elsewhere.

The Browns had the No. 1 pick, but Mahomes never seemed like a viable candidate. The front office seriously considered North Carolina quarterback Mitchell Trubisky before listening to the coaches and drafting defensive end Myles Garrett. Mayfield was surprised Mahomes wasn’t the pick.

“You know, talent-wise I thought he should’ve been. I love Myles but,” he said.

The Chiefs would’ve taken Mahomes at No. 1 and were thrilled the Browns and every other team in the top nine passed. They traded the No. 27 pick, a third-rounder and a 2018 first-rounder to the Bills to move to No. 10 and grab Mahomes.

Browns general manager John Dorsey, who went out on a limb to take the undersized Mayfield at No. 1 this year, was in the same role with the Chiefs and helped secure Mahomes before being fired a couple of months later and replaced by Brett Veach.

“Brett Veach wore Dorsey and I out over this guy,” Chiefs coach Andy Reid said. “Every five minutes, he was talking about this guy. We both looked at him and go, ‘You know what? This guy is pretty good.’ We ended up taking him.

“We put on the tape of Patrick, and that tells you the truth right there. We brought him in here and got to know him, and there was nothing not to like so we took him.”

Mahomes had his critics before the draft and some dismissed his gaudy numbers because of the gimmicky Texas Tech offense. He visited Browns headquarters and got a good vibe.

He said he carries no ill will or thoughts of revenge for the teams that passed on him but would’ve liked to be the top pick.

Reid believes the Browns found their franchise quarterback in Mayfield.

“You guys are in the same situation. You have one there that was the same gig,” he said. “You put on the tape, and it tells you the story. These guys both are heckuva football players. The National Football League is very lucky to have both of them.”

Mayfield was a freshman at Texas Tech during Mahomes’ 2013 visit and was impressed by the teenager.

“Patrick’s always been an easygoing guy,” Mayfield said. “That’s why those teammates he’s always had played for him so hard. He just has that presence about him that you just want to be around, you gravitate towards that, so it’s fun to see him grow.”

Mahomes didn’t need long to blossom in the NFL. He sat behind veteran Alex Smith as a rookie, making his only start in the regular-season finale. The Chiefs traded Smith in the offseason to clear the way for Mahomes and haven’t regretted it. He has seven 300-yard games in eight tries and five games, including three straight, with four touchdown passes.

“Not a surprise at all,” Mayfield said. “He’s been very talented. Everybody’s known that since he got to Texas Tech. He’s a big guy with a strong arm.”

Mayfield takes pride in his arm, which is stronger than many scouts acknowledged, but was quick to admit he’s jealous of Mahomes’ rocket.

“Absolutely,” he said. “There was a play in that college game, he was rolling to his left, flicked it and went about 65 in the air for a touchdown, back of the end zone. He does stuff that you can’t even think that would actually be possible.”