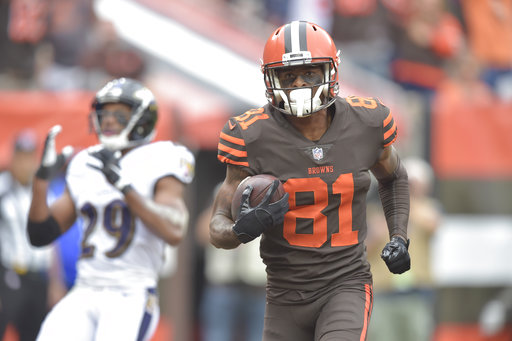 BEREA — The depleted receiving corps could get a boost this week against the Chiefs.

Rashard Higgins returned to practice Thursday for the first time since spraining his right medial collateral ligament Oct. 7 against the Ravens. He’s missed three games, and the Browns offense has missed him.

Higgins has 16 catches for 244 yards, a 15.3 average and a touchdown in five games as the No. 3 receiver. He’s a reliable target and has a nice chemistry with quarterback Baker Mayfield after working together throughout training camp and the preseason on the second-team offense.

The receiving corps has been a sore spot since Higgins’ injury in the 12-9 win over the Ravens, the last victory before a three-game losing streak.

** Middle linebacker Joe Schobert (hamstring), defensive back Damarious Randall (groin) and center JC Tretter (ankle) didn’t practice for the second straight day. Schobert will likely miss his third straight game Sunday against the Chiefs, while Randall and Tretter have been able to play through the injuries.