Mailbag: Urban Meyer in the NFL? Why no veteran WR help? Is Dave Toub a serious candidate? 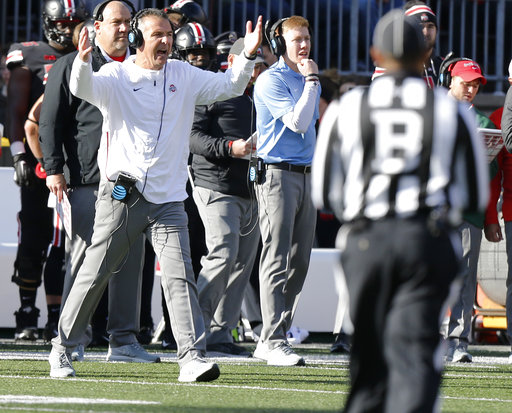 Q: Do you think Urban Meyer would be a good NFL coach? If so, would he be a good fit for the Browns?

I’d be a little stronger but I’m working under a no-expletive policy.

Watching Meyer on the sideline in Columbus has become painful. The smallest thing that goes wrong for the Buckeyes sends him into an expression of misery. The pressure is more intense in the NFL and I’d be worried he wouldn’t make it through the preseason.

Even if that weren’t a concern, I don’t think Meyer’s offensive system translates to the NFL. Too much quarterback running with J.T. Barrett and then this year the failure to adjust without a running quarterback.

I know a lot of Buckeyes fans in Northeast Ohio would be excited if the Browns hired Meyer, but I don’t like the idea at all.

Q: There seems to be some reluctance in getting experienced wide receiver help over the season so far. Would an experienced player like Brandon Marshall be a good signing? (An upgrade on Breshad Perriman in my opinion.)
Would this provide some much needed help to Jarvis Landry and offer some additional experience, help and support to the young WRs?

A: I think it might help in the short term, but you nailed it with your reluctance observation. The Browns aren’t a playoff contender, so I think general manager John Dorsey doesn’t want to spend resources for a quick fix. I also know the front office loves the young receivers and believes they can develop given the opportunity. As for support for the youngsters, that falls on Landry.

The problem is a lack of ready receivers stunts the development of quarterback Baker Mayfield, so Antonio Callaway and Damion Ratley need to grow up in a hurry.

Q: Could you please offer some analysis about what occurred to Al Saunders’ viability as the interim head coach? Tremendously accomplished offensive coordiator as worthy of the Hall of Fame as any coach working in the sport today. It is hoped he will be assisting Freddie Kitchens with needed adjustments Todd Haley couldn’t or wouldn’t implement.

A: Saunders is a great guy to have around and one of the most energetic guys you’ll ever see. But his career is winding down at 71 years old and I think he’s better in his role as an offensive assistant. With that said, he surely can help Kitchens adjust to the coordinator job.

I know Gregg Williams has his detractors, but I believe he was the best internal candidate for head coach over the final eight games.

Q: Do you think the Browns will look at the special teams coordinator from Kansas City, Dave Toub? I’ve followed his career and think he would make a great head coach.

A: Yes, I do. I’d be stunned if Toub isn’t on GM John Dorsey’s short list of candidates.

Dorsey doesn’t strike me as someone who would care that Toub’s background is in special teams, especially because Dorsey was a special teamer as a player. Toub has a great reputation and Dorsey knows him well from his time in Kansas City. He could be the guy Dorsey wants.

Q: What is the NFL record for most overtime games in a single season by one team?

Q: Did I miss a statement from Hue Jackson thanking the city, fans, and Browns for the opportunity? If so, isn’t that rare for someone given so much leeway?

Q: What do you expect from Freddie Kitchens’ first 15 or so scripted plays?

A: Points, lots of points.

No, seriously, I think you’ll see a mixture of runs and short passes. Kitchens’ first goal should be getting Baker Mayfield in a rhythm. His second goal should be keeping the Chiefs offense off the field by controlling the clock.

Mailbag: What’s the future hold for Hue Jackson and his coodinators? Why aren’t the tight ends used more?
Mailbag: Help coming from IR? What’s up with Austin Corbett?