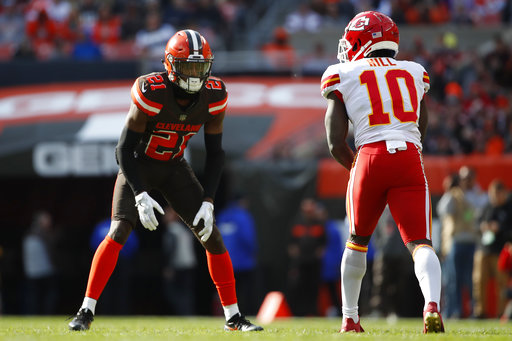 A hip flexor injury returned last week and knocked him from the 37-21 loss to the Chiefs after one defensive series, but he was back practicing Thursday and expects to play Sunday against the Falcons.

Ward, the No. 4 pick, missed the end of rookie minicamp in early May with the same injury. He said it went away before he felt it again last week.

“It’s just like what I had around rookie camp when I first got here,” he said.

Ward wasn’t listed on the injury report before the Chiefs game and said he thought he’d be able to make it through.

“But obviously that wasn’t the case,” he said, adding he didn’t aggravate it on a particular play. “It was reoccurring throughout that whole week and then going into the game. As the game was going on, it was very hard for me to cut and make moves and run, so I couldn’t really go.”

Cornerbacks rely on their quickness and speed, so any injury that limits their ability to move is a problem.

“Yeah, I’m dealing with it,” said Ward, who is a candidate for Defensive Rookie of the Year with 40 tackles, three interceptions, nine passes defensed, a forced fumble and two fumble recoveries. “I’ll be all right, though. I’ll get through it.”

“They’ve got a lot of talented players that can make plays and we’ve just got to try to take those guys out of the game to the best of our ability,” Ward said.

The Browns are without cornerbacks Terrance Mitchell (broken wrist) and E.J. Gaines (concussion) but hope to use a combination of Ward, cornerback TJ Carrie and versatile defensive backs Damarious Randall and Briean Boddy-Calhoun.

Randall was used as a cornerback against Tampa Bay and matched up with big-bodied receiver Mike Evans, but a lingering groin injury might keep Williams from using him on Jones, who’s 6-foot-3, 220 pounds and has great speed.

“A lot goes into the matchup type of stuff, the depth on the roster or the depth that day and then his health,” Williams said.

He was asked if Randall is healthy enough to play corner.

“He is really having a good week right now. Knock on wood,” Williams said.

“It’s good to hear from him. I know he’s excited to come back to Cleveland and play in front of the fans,” Bitonio said. “I know he misses the guys around here and the people in Cleveland, but he’s enjoying himself down there.”

“It is hard to put into a real way to measure the impact that he has had on our team,” he said. “It is not just on the field, it is off of the field, as well — the standard that he sets as a pro. It is the toughness of we have had him play through injuries — I think he fractured his leg and played through.

“He is always challenging to see how good he can get.”

Williams has taken a measured tone since his promotion to interim coach after Hue Jackson was fired Oct. 29. It’s a noticeable change from his bluster as defensive coordinator.

“There is a difference from being the warden inside of the penitentiary of the defensive room in there to being the head coach. It is different,” he said. “I have to morph to help these guys. I have to do whatever is best to help the guys that are here. Trying to do that the best that I can.”

FUN ON THE RUN

One of the more notable changes in Freddie Kitchens’ first game as offensive coordinator and play caller Sunday was more involvement for speedy receiver Breshad Perriman.

He played 26 snaps (35 percent), caught a pair of 18-yard passes in six targets and rushed twice for 9 yards. Perriman, who signed with the Browns on Oct. 13, had one rush for 2 yards in two years with Baltimore.

“It was fun. I like it,” he said. “I haven’t gotten that in awhile actually, so I’m excited to get them.”

The Falcons, tied for 27th in the NFL with 17 sacks, signed free agent Bruce Irvin on Thursday to boost their pass rush and expect him to play against the Browns.

Irvin has 40 sacks in seven years with the Seahawks and Raiders. He had three with the Raiders before he was cut Saturday, including one of Cleveland’s Baker Mayfield in Week 4.

All signs continue to point to Greg Robinson making his second straight start in place of Desmond Harrison at left tackle, though Williams wasn’t ready to make it official.

“If he plays the way he did last week, he will make us better,” Kitchens said.

Williams said Mayfield’s confidence in Robinson would be a factor in the decision.

** Linebacker Jamie Collins (ankle) returned to practice in a limited capacity, and Williams said he also had a “good day.”

** For the Falcons, receiver Mohamed Sanu (hip) and kicker Matt Bryant (right hamstring) returned to practice and were limited.