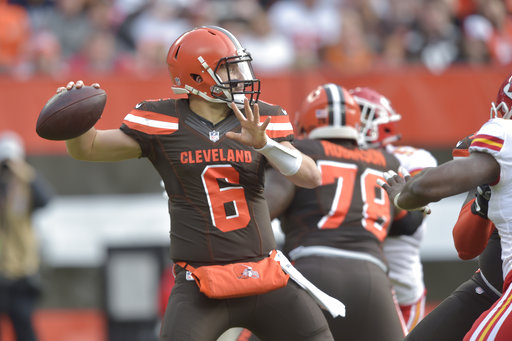 BEREA — Baker Mayfield entered the NFL with the reputation of a gunslinger and the belief he can make every throw.

“Just cut it loose and play, and make faster and faster decisions,” he said Thursday.

Williams said Mayfield has made a lot of strides in his first six starts, and the next step is to play fearlessly.

“That is the No. 1 thing that I have tried to convey to him.”

Mayfield doesn’t lack for confidence and he’s had the support of the front office, coaching staff and teammates since he arrived, but Williams said it was important for him to make sure Mayfield knew the organization is behind him 100 percent.

“I do not think that he had to be told that,” Williams said. “I just wanted to make sure that he felt that. I am kind of that way as a presence. Making sure that you feel, not hear.”

Mayfield says officials need to be more consistent on hits to head.

Mayfield, the No. 1 pick, began the year on the bench and got off to a blazing start when his number was called. He beat the Jets off the bench in Week 3, went to Oakland and put up 42 points in an overtime loss in his first NFL start, then threw for 342 yards in a win over the Ravens.

“I do not think you can play this position scared, and I do not know that he has ever played it scared,” offensive coordinator Freddie Kitchens said. “Sometimes you have to say whatever happens happens. I know the good ones throw four picks or whatever, and the next time they get an opportunity, they are going to try to fit it into a window the size of a … window.

“They do not care what happened the previous play, and they have short memories.”

Kitchens, who played quarterback at Alabama, pointed to Carson Palmer and Kurt Warner as examples. He was an assistant coach when they played for the Cardinals.

“You have to have a short memory, not let the previous play affect you, the previous game affect you and just play the next play like it is the first one,” he said.

Mayfield’s media availability was Wednesday, so he didn’t have the chance to respond to Williams’ “cut it loose” advice. But he’s talked a lot this year about eliminating mistakes.

“There was a big jump last week. I have to make that and more so this week,” he said. “Eliminating the mistakes that I made in the past and learning from those. That is what I think the key to improving at a good rate is, not making that same mistake twice.

“Putting us into a good position to win.”

The Browns have lost four straight to drop to 2-6-1, and Mayfield is 1-5 as the starter.

The Falcons (4-4) have won three straight and visit FirstEnergy Stadium on Sunday. Mayfield should have the opportunity to let it rip, as the Atlanta defense is ranked 29th against the pass (304.2 yards per game) and in scoring (28.2).

“No. 1, I really see his toughness. Standing there, no flinch on the throws, taking shots and scrambling to go for a first down,” Quinn said on a conference call. “The second piece after that is, I thought he has real confidence and accuracy to throw into tight windows. It might be man-to-man coverage, so the ball has to be at such a precise location and I have seen him do a good job with that. He throws a good deep ball, too.”

Mayfield was kicking himself after missing a couple of deep throws against the Chiefs, to receiver Breshad Perriman in the end zone and tight end David Njoku on a corner route.

“Those are things that I have to give them a chance,” Mayfield said. “Have to put it into the best position for them to make a play. I will get that fixed. Sometimes physical mistakes happen. That is the frustrating part, that I expect to make those throws.”

Perriman has no concerns about Mayfield’s progress or confidence.

“His swag is on 100 all the time, so I love him,” he said. “I feel like he’s a great quarterback and he’s going to continue to get better and better.

“You can just tell on the field, you can tell he’s not kind of tense about nothing. He’s pretty much worry-free. He knows he has a job to do, but at the same time, he’s kind of out there just laid-back and chillin’. He’s a baller.”