Nick Chubb doesn’t go down without a fight, battles for every yard 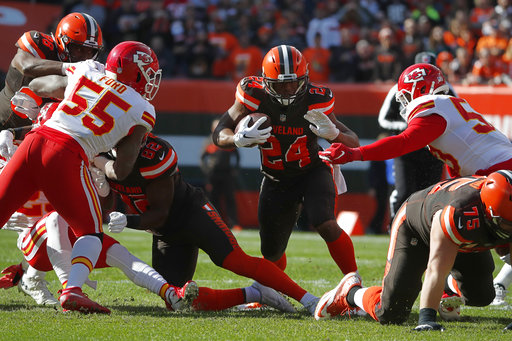 BEREA — Nick Chubb introduced himself to the NFL with 63- and 41-yard touchdown runs in Week 4 against the Raiders, removing doubts about his ability to pull away from defensive backs.

He’s left a more lasting impression on defenders lately with a running style they won’t forget — and bruises that take awhile to fade.

“It is very rare for him to get taken down by one player,” quarterback Baker Mayfield said. “The extra yards once he hits the pile and pushes it — it goes a long way. It wears down on a defense when they think they have him wrapped up but he pushes it another 4 yards.

“It is the shortest of gains when it comes down to it, but it is huge in the long run for moving the chains.”

Chubb, the No. 35 pick out of Georgia in April, said he doesn’t know where he developed the attitude to finish every run but he’s always had it.

He sees the toll it takes on a defense.

“I think just with everything, our O-line starting it upfront, just beating those guys down and me just going there and fighting for every yard,” he said. “I think after awhile, yeah, it does wear on them. Defenses don’t really want to tackle the guy or hold up the blocks the whole game and you’ll catch them slipping every once in awhile if you keep at it, so I think that’s our whole mindset.”

Chubb carried a career-high 22 times for 85 yards, a 3.9 average and a 3-yard touchdown. The score capped a 12-play, 75-yard second-quarter drive in which Chubb had eight carries for 40 yards and a 5-yard catch. Chubb said he sees the defense’s fatigue more in a long drive than in the fourth quarter.

Chubb is from Cedartown, Ga., and grew up cheering for the Falcons (4-4), who visit FirstEnergy Stadium on Sunday. Atlanta coach Dan Quinn has been a fan for years.

“He is tough. We loved him here because of his style, his attitude and what he stands for as a player,” Quinn said. “It is the yards after contact and some people may have questioned how do the big backs do when they get in the NFL. Are they able to still get yards after contact like they did in college? And the answer to that question, in his case, is absolutely. You see him breaking tackles and doing all of the things that make him him.”

Kitchens said Chubb has good body lean and body posture when he enters the pile.

“You always want to fall forward because that 1 yard matters,” Kitchens said. “When it is third-and-1, you are going to wish you had that 1 yard prior to that.”

Chubb, 22, has experienced a lot in a short amount of time in the league.

His mentor, Carlos Hyde, was traded two days before a game in Tampa Bay. Coach Hue Jackson and coordinator Todd Haley were fired eight days after that game due to “internal discord.”

“It has been a lot this season,” Chubb said. “The main focus is just for us to keep going and keep getting better. Keep that outside stuff outside. No more distractions. Stay focused, stay together as a team and keep moving forward.”

General manager John Dorsey traded Hyde to open the door for Chubb. After three, two, two, three, three and three carries with Hyde here, Chubb has gotten 18, 18 and 22 the last three games as the starter. He has 230 yards on 58 carries, a 3.97 average and two touchdowns.

“My first game as a starter, it came on so fast that Friday, but now I’m used to it,” he said.

“Nick is the consummate pro from the standpoint of he prepares every day, and he is all work and business,” Kitchens said. “It was not a big adjustment at all for him. Of course, everybody wants more carries, touches and everything like that. It just came to fruition in a different means than he necessarily saw.”

His NFL breakthrough was different than anyone had seen. According to Elias Sports, of the more than 1,200 players in NFL history to rush for 100 yards and two touchdowns in a game, Chubb was the first to do so on three carries or fewer.

“It won’t happen that easy anymore,” he said.

Life in the NFL is different and Chubb’s adjusting. He said his biggest strides have come in technique and “actually knowing what I’m looking at.”

“In college I got away with just running the ball,” he said. “Now I have to actually know what’s happening in front of me.”