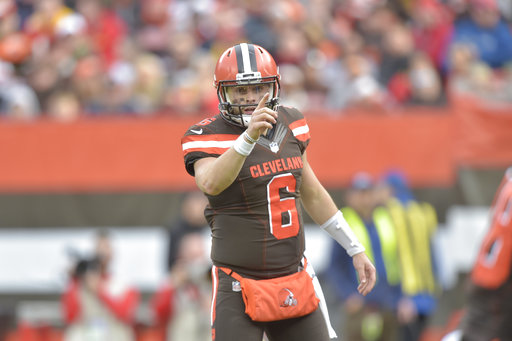 Left guard Joel Bitonio is the longest-tenured player on the roster, arriving in 2014. He’s been with the Browns through coaching and front office changes, loss after loss and consistent misery.

Less than two weeks after the latest coaching firings and in the midst of a four-game losing streak, Bitonio continues to smile and insist this year’s different. He has plenty of reasons for the optimism, but one stands alone at the top.

“It’s not everything, but it’s everything,” Bitonio said during the week. “You’ve got to have a quarterback to win in the NFL and it hasn’t been perfect, but to have him out there with you, there’s always that hope that, hey, we have a chance to win this game.”

Bitonio has company. Defensive end Emmanuel Ogbah said Mayfield is why 2018 doesn’t feel like its predecessors.

“We’ve got a quarterback who knows how to fight,” he said. “You want to play for a guy like that who inspires you. He comes to the defensive side of the ball like, ‘Hey, we’re still in this. Just give me one more chance out there.’ Guys on defense love that. They love a quarterback who can go out there and make a promise and say, ‘Hey, I’ve got your back.’”

The “Baker Effect” reaches to every corner of the locker room and beyond. A fan base weary from a disastrous decade remains buoyed by Mayfield’s presence. If the search for the franchise quarterback is finally over, brighter days are undoubtedly ahead.

In the meantime, Mayfield is getting acclimated to life with the Browns.

As Brady Quinn, Colt McCoy, Brandon Weeden and DeShone Kizer can attest, that’s quite an adjustment.

He’s 1-5 as the starter for the Browns (2-6-1), who are looking to avoid a fifth straight loss Sunday against the Falcons (4-4) at FirstEnergy Stadium.

5 things to watch, 3 key numbers, the pick for the game.

“It is about finding out what we need as a team. Right now, that is leadership and being able to continually improve every week.”

Mayfield looked and sounded down after taking a pounding Oct. 28 in a 33-18 loss at Pittsburgh. But he recalibrated after coach Hue Jackson and coordinator Todd Haley were fired the next day, quickly found a comfort level with new coordinator Freddie Kitchens and took a self-described “big jump” last week in the 37-21 loss to the Chiefs.

Mayfield completed a career-high 29 passes for 297 and two touchdowns. He’s thrown multiple touchdowns in the last three games and four of six.

He’s talked often about being the right man to change the culture of the organization. That includes persevering through the tough times with the right attitude.

“We still have a lot of games left,” he said. “If I was down about it, I do not think that I would be the man for the job.”

His teammates appreciate how Mayfield has dealt with the unfamiliar losing.

“He handles it like a champ,” right tackle Chris Hubbard said. “He still goes out there and does everything he needs to do. You would never know he’s a rookie the way he handles everything.

“He’s got a job to do and that’s to win. He comes to work every day with a chip on his shoulder. That’s just who he is.”

Talk of the playoffs disappeared at different stages of the losing streak, depending on the initial level of optimism. That doesn’t erase the need for wins, particularly as part of Mayfield’s development.

The Falcons, who blew a 28-3 lead in the Super Bowl two years ago, have won three straight to get back to .500. Their playoff history provides confidence the Browns don’t have, but the approach after the slow start is one to emulate.

“The main thing for us was the message to be real consistent, to stay the course,” Quinn said. “Make sure that we knew what we were doing was right and we had to do what we did better. We really have belief in the guys that are here.”

The Browns are beginning to have that belief with general manager John Dorsey picking the players and in charge of the coaching search. The faith in Mayfield feels like an organizational consensus.

“He’s doing all the things right,” Bitonio said. “To see the work he’s put in, the talent that he has and the pieces we can add around him and keep improving with, there’s no limits on what we can be in the future.

Rookie running back Nick Chubb has been impressed with Mayfield the leader.

“He’s taken the role headfirst, never looking back,” he said. “He brings that energy and burst that we need. This team will follow him anywhere.”

“He’s one of those guys who’s going to bring it to you, his attitude and his demeanor,” Hubbard said. “He has the right things that’s leading up to be that guy, that franchise quarterback guy.”

Mayfield leads the rookie quarterback class, which includes the Jets’ Sam Darnold, Arizona’s Josh Rosen and Buffalo’s Josh Allen, with 252.6 yards a game, a 60.0 completion percentage and an 81.5 rating. With a touchdown, 20 completions and 200 yards against Atlanta, he’ll join the Colts’ Andrew Luck in 2012 as the only rookies to do so in six of their first eight games.

The matchup with the Falcons should be a good one for Mayfield. They’ve had big key injuries, allowed 300 yards passing in five of eight games and rank 29th against the pass (304.2) and in scoring (28.2 points a game).

“He has a crazy arm, he can move outside of the pocket and he can make plays with his legs. The way that he’s able to stay calm under pressure. He’s just got everything that you would want in a quarterback.”