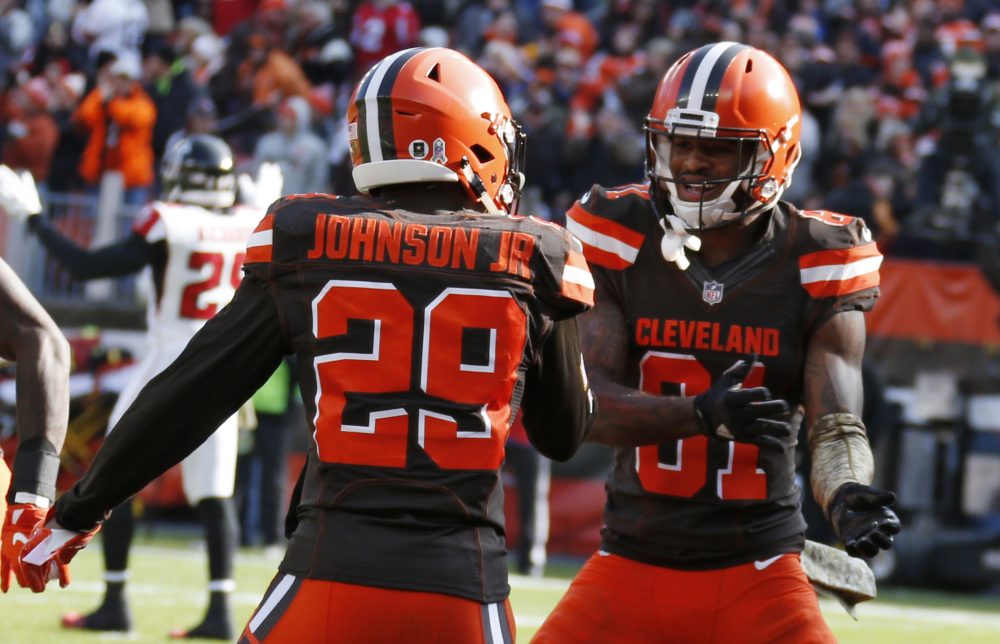 That didn’t stop him from making one of the game’s biggest plays Sunday, as he stripped receiver Mohamed Sanu and recovered the fumble on the first drive of the third quarter.

The offense converted the turnover into a touchdown — Cleveland has 41 points off a league-high 25 takeaways — and the Browns beat Atlanta 28-16 at FirstEnergy Stadium.

“It is not the first time that he has done that,” interim coach Gregg Williams said. “He does that in practice. He has had several of those already this year. It was very big.”

The offense went 41 yards in six plays, with Baker Mayfield throwing an 11-yard touchdown to Duke Johnson for a 21-10 lead with 10:27 left in the third quarter.

Carrie only started because Terrance Mitchell (broken wrist) and E.J. Gaines (concussion) are on injured reserve. The game plan called for Carrie to follow Jones for much of the game, with free safety Damarious Randall helping out over the top to eliminate the big play.

Jones caught seven passes for 107 yards and a 1-yard touchdown, but he didn’t dominate like he can as the defense held the high-scoring Falcons to 16 points. His longest play was a 30-yard catch-and-run in the second quarter.

“Man, that’s a big feat. I followed him the whole game,” Carrie said. “It was definitely a big task for me to be able to step up and shadow him the whole game throughout the game and I think I played very well. Receivers like him, you can only contain so much, right? You don’t let them take over the game and force them to go other places.”

Carrie had six tackles and two pass breakups, including a gorgeous deflection on a fade to Jones in the end zone. Carrie was talking to a teammate in the locker room after the game about wagging his finger at Jones.

“The big man at task,” he said. “When you get elite receivers like that, the only thing you can do is try to frustrate them, get them off their game, get them thinking about why the ref isn’t calling calls and maybe why the offensive coordinator is not calling the play for them. So you do as much as you can to frustrate them.”

Carrie signed as a free agent in the offseason, and Smith said his preparation paved the way for the performance against Jones.

“It doesn’t surprise me the way he comes to work each and every day,” he said.

New offensive coordinator Freddie Hitchens said Thursday the goal in his new role was to get to the wishbone. Everyone laughed.

The former running backs coach employed all three running backs together in the backfield in a full-house look for six of seven plays in a second-quarter drive. Twice Mayfield handed to Johnson, who ran the option with Nick Chubb — once Johnson kept the ball, the other time he pitched late after getting hit.

The Browns moved 42 yards on the drive before Kitchens got greedy and tried a halfback pass with rookie Dontrell Hilliard. The Falcons were in a zone, Hilliard’s pass for Mayfield was wayward and safety Damontae Kazee intercepted it.

Mayfield was asked if Hilliard had thrown the pass in practice.

Williams said the play “could have been out the gate” if the Falcons hadn’t played zone behind their man-to-man look.

“I envision myself catching a one-handed pass over somebody, something spectacular like that, but the reality is I’m not that athletic,” Mayfield said. “It could’ve been a great play, but it’s taking a shot. You have to take your shot plays within the game.”

Chubb blamed the play call and the throw for the interception but was a fan of the full-house formation.

“You can tell that Coach Freddie loves his running backs because he had us all involved in that package,” he said.

PROTECTING THE BLIND SIDE

Greg Robinson made his second straight start at left tackle, and the Browns didn’t allow a sack for the first time since Dec. 27, 2015. Robinson was called for two holding penalties but continued to impress Mayfield.

“When you are not having to worry about the rush as much, you are able to get comfortable back there and I was able to be decisive and get the ball out quickly,” Mayfield said. “It helps having Greg in there. He played great again.”

Undrafted rookie Desmond Harrison started the first eight games but was inactive for the second straight week. He came down with an illness last week and returned to practice this week.

Harrison had been struggling, particularly stopping the bull rush, and Robinson has been an upgrade. Robinson, the No. 2 overall pick of the Rams in 2014, had only played as an extra lineman and on special teams before last week.

Williams said it was his decision to stick with Robinson against the Falcons and said there’s still a competition for the job.

Jones became the fastest in NFL history to reach 10,000 receiving yards with a 30-yard catch-and-run in the second quarter. He needed only 104 games.

“He is amazing. He really is,” quarterback Matt Ryan said. “He is a unique and special player. He is as talented as probably any player that has ever played. His skill set is phenomenal. He works extremely hard and has been awesome to be around for his entire career.”

** Linebacker Jamie Collins led the team with nine tackles and had a fumble recovery.

Thomas, a third-round pick, was a healthy inactive for the third time. There were also three games he was active but didn’t play.

** Chiefs linebacker and Clearview graduate Anthony Hitchens was fined $13,369 for unsportsmanlike conduct after he knocked the ball from tight end David Njoku’s hands after a play.

Notes: Myles Garrett frustrated by double teams and losing but says they won’t stop him
Notes: Browns, Hue Jackson to meet again after bye in Cincinnati