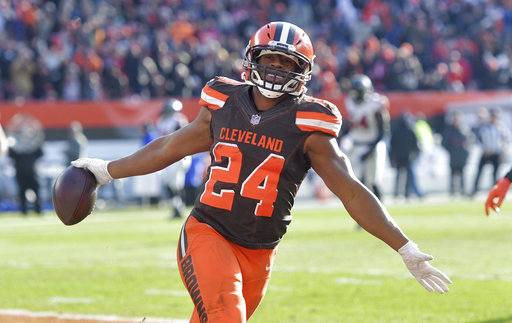 CLEVELAND — Nick Chubb took the handoff to the right, planted his right foot in the ground and exploded through the hole provided by right guard Kevin Zeitler, right tackle Chris Hubbard and center JC Tretter.

Chubb sprinted around, through and past a diving tackle attempt by safety Damontae Kazee, cut back to the middle of the field under the direction of receiver Antonio Callaway and outran linebacker Foyesade Oluokun and cornerback Desmond Trufant. He was met in the end zone by receiver Jarvis Landry and running back Duke Johnson, who came off the sideline.

They had a lot to celebrate.

Chubb’s 92-yard touchdown was the longest run in franchise history and put the Browns up by 18 points in the third quarter of a 28-16 win over the Falcons on Sunday at FirstEnergy Stadium. He passed Hall of Famer Bobby Mitchell’s 90-yard touchdown against Washington in 1959.

“It definitely is very special just being in this place with so much history and so many great running backs, and to be a part of it breaking records, it is a great feeling,” Chubb said.

The run is second in NFL history among rookies, trailing only a 97-yarder by Pittsburgh’s Bobby Gage in 1949.

“Just a great job upfront,” said Chubb, the No. 35 pick out of Georgia. “Those guys blocked hard the whole game, and it was wide open. I remember running through and seeing the safety left, and then after that, I see Callaway blocking the corner, which he did a tremendous job of that. He always does. After that, I am just wide open to the house.”

Chubb’s afternoon was much more than a singular highlight. He rushed 20 times for 176 yards, an 8.8 average. He added three catches for 33 yards, including a 13-yard touchdown on a perfectly timed misdirection screen pass.

“I was very patient. I hid behind my blockers, and I caught the ball and it was to the end zone wide open,” he said. “Just get their eyes somewhere else and not notice me. It worked.”

The 176 rushing yards are fifth-most for a Browns rookie, and he has six touchdowns on the season, including runs of 92, 63 and 41. He’s the first player since Tampa Bay’s Doug Martin in 2012 with at least three rushing touchdowns of 40 yards in his first 10 career games.

In four games since he moved into the starting lineup following the trade of Carlos Hyde, Chubb has 78 rushes for 406 yards, a 5.2 average and three touchdowns. For the season, he has 94 carries for 579 yards and a 6.2 average.

“He’s been waiting for his time. He’s a patient guy. I’m very happy for him,” quarterback Baker Mayfield said. “He’s playing at a very high level and the best part about it is he never expected anything else. He’s getting extra yards. He’s creating plays and breaking a lot of tackles.”

“I am getting more carries, and I am going to make the most out of all of them,” said Chubb, who grew up near Atlanta. “I know that is my hometown and all, but I just prepared like any other game.”

He sees parallels with his early Georgia career, as he sat behind Todd Gurley and coach Mark Richt was fired after his freshman season. Interim coach Gregg Williams, who’s 1-1 since Hue Jackson was fired, sees a big-time playmaker.

“He has good vision, and then once he gets out there, he is not easy to bring down and can run away from you,” Williams said. “That was excellent.”

As Chubb was about halfway through the 92-yarder, Callaway was in front of Trufant and waving for him to cut to the middle of the field. Chubb saw it and took the direction.

“I almost did not take it,” he said. “I am glad I trusted him and took it because after that it was wide open to the house.”

Mayfield’s final game at Oklahoma was an overtime loss to Chubb’s Bulldogs in a playoff semifinal. When a reporter mentioned that Sunday, Mayfield had a painful flashback.

“He is a physical runner. He is able to impose his will. The runs that sometimes end in just 4 yards, he is turning them into 6 and 7-plus. It hurts a defense. It is really good to have a guy like that on your team.”