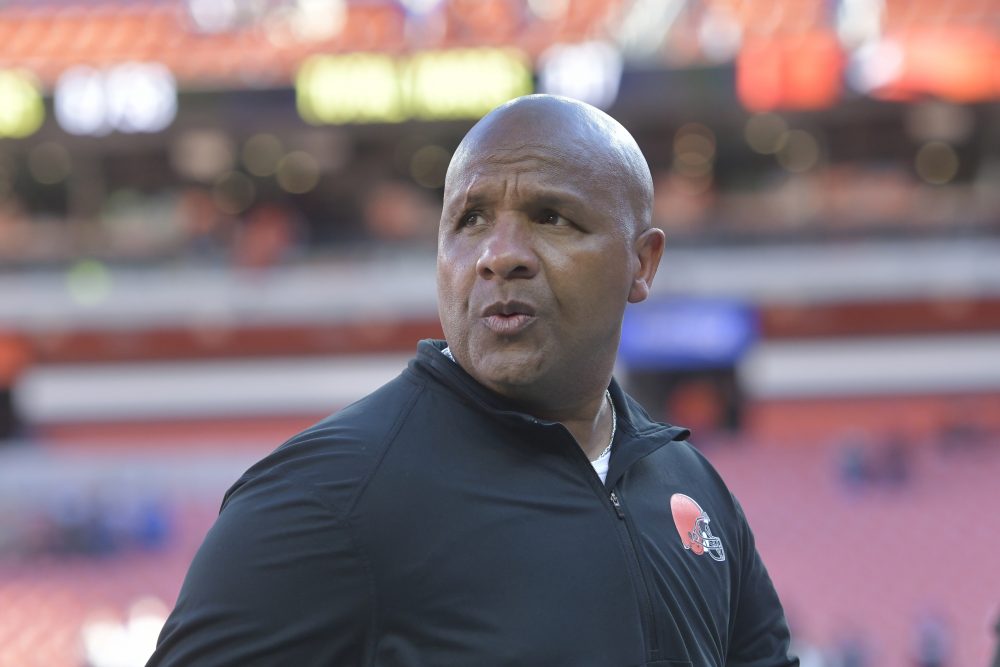 The Browns will cross paths with fired coach Hue Jackson sooner than they thought.

He will have plenty of thoughts to share about the team he coached for 2½ seasons.

The Browns’ next game is at Cincinnati on Nov. 25 following the bye week. The Browns also host the Bengals on Dec. 23.


Bengals coach Marvin Lewis fired defensive coordinator Teryl Austin on Monday and will take over his duties. Jackson will help him handle the dual roles.

“I have a great comfort level with Hue and his ability to assist me with the day-to-day responsibilities on defense, including analyzing our opponents and helping me on gamedays with the players and defensive coaches,” Lewis said in a news release.

“I’m pleased to have the opportunity to join the Bengals this season,” Jackson said. “There is a lot of talent on this team, and I look forward to doing my part to help it finish the season strong.”

Lewis and Jackson are close friends and worked together for years, first in Washington and then twice in Cincinnati with Lewis as coach. A job on Lewis’ staff was always the logical landing spot for Jackson after the Browns fired him Oct. 29 with a 3-36-1 record, but within a month is unusual.

While many coaches take time to themselves after getting fired, Jackson started a media blitz within a week, talking openly about his desire to get back in the game. He told ESPN’s Adam Schefter last week on his podcast he’d like to join a team this season.

“Oh absolutely,” he said. “If there’s somebody who I know and trust and respect, felt like they needed me to help or to do something for them along the lines of assisting in any way that I can to help them be as good as they can be on gameday, I would do that in a heartbeat.”

Jackson has coached predominantly offense and special teams in his career but led the Cincinnati secondary in 2012 when he needed a job after his year as head coach with the Raiders.

The Bengals are 5-4 and in the thick of the AFC playoff race, which Lewis pointed to as a reason for firing Austin. They lost to the Saints 51-14 at home Sunday and became the first team in the Super Bowl era to give up 500 yards in three straight games.

Middle linebacker Joe Schobert had a big impact and calming effect in his return after missing three games with an injured hamstring as the Browns stunned the Falcons 28-16 on Sunday.

“It felt great to have him,” cornerback TJ Carrie said. “His leadership and his capability to get everybody lined up, that comfort factor that he’s on the field and him being able to rotate in throughout and really fighting throughout the course of the game to come back in and take a couple series out, it really meant a lot to us and I think as a defense we fed off it.”

Schobert was credited with four tackles, including a third-down stop at the goal line in the fourth quarter. He then covered the intended target on the fourth-down incompletion.

Schobert had played every snap since the start of 2017 before the hamstring injury. His snaps were monitored Sunday — he played 51 of 75 for 68 percent — in the hopes the hamstring will be better coming out of the bye.

SEE YA NEXT WEEK

The players are guaranteed a few extra days off during the bye week through the collective bargaining agreement. Williams gave the Browns the whole week.

He promised them he’d cancel the Tuesday schedule if they beat the Falcons, then threw in Monday during the postgame celebration. So the players were free to go following the game and aren’t due back until Monday.

Williams said he can’t remember a bye this late in the season — Week 11 — but said it gives the organization more information to analyze, will help heal nagging injuries and allow the players to clear their minds.

“It is a good time for this to happen right now,” he said. “We have to make sure that it is right when we get back and not take any steps back.”

Williams said Garrett is healthy, the plan all along was to reduce the snap count as the season progressed and the development of the backups allowed Garrett to leave the field for more plays.

** Reserve linebacker Tanner Vallejo set a season high with 41 snaps (55 percent). He joined Schobert and Jamie Collins in the base defense and rotated with Schobert in nickel situations.

“Tanner stepped up and did some good things there,” Williams said.