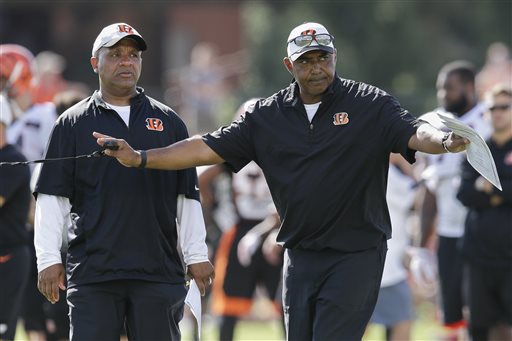 Free safety Damarious Randall is keeping up with the news during the bye week.

Former Browns coach Hue Jackson officially joined the Bengals staff Tuesday morning as special assistant to head coach Marvin Lewis. Jackson was fired by the Browns on Oct. 29, so it took him only two weeks to find a new job.

It just happens to be in the same state, same division and with a rival the Browns will play twice over the final six games.

“In other words Hue we play the browns twice tell us what you know,” Randall tweeted, along with three loudly crying face emoji.

In other words Hue we play the browns twice tell us what you know ???…

Jackson seemed destined to return to Cincinnati. He’s close friends with Lewis and was an assistant under him with the Bengals from 2004-06 and 2012-15 before leaving to coach the Browns. Bengals owner Mike Brown is also a big fan of Jackson.

The speed of this reunion was exceptional and a spot on the staff was created Monday when Lewis fired defensive coordinator Teryl Austin. Lewis will assume the role of coordinator.

“I have a great comfort level with Hue and his ability to assist me with the day-to-day responsibilities on defense, including analyzing our opponents and helping me on gamedays with the players and defensive coaches,” Lewis said in a news release.

Jackson has coached predominantly offense and special teams in his career but led the Cincinnati secondary in 2012 when he needed a job after his year as head coach with the Raiders.

“I’m pleased to have the opportunity to join the Bengals this season,” Jackson said. “There is a lot of talent on this team, and I look forward to doing my part to help it finish the season strong.”

The Browns won’t have to wait long to see Jackson in the Bengals stripes. They travel to Cincinnati on Nov. 25 for their first game after the bye. They host the Bengals on Dec. 23.

Lewis hired Jackson for more than just his intelligence on the Browns, but the two meetings will go a long way in determining the playoff fate of the Bengals (5-4). Jackson has extensive knowledge of the personnel, coaching staff and playbooks after 2½ years in Cleveland.

He went 3-36-1 before being fired along with offensive coordinator Todd Haley. They were fired a day after dropping to 2-5-1 with a 33-18 road loss to the Steelers, and owner Jimmy Haslam cited “internal discord” as the tipping point for the dismissals.

Jackson’s record with the Browns is the worst 40-game span for a coach in the Super Bowl era. His teams were outscored 1,072-667 and were 0-4 against the Bengals.

Rather than disappear for a while after the firing, Jackson emerged on a media tour within the first week. His eagerness to find another job was obvious and he told ESPN’s Adam Schefter he hoped it would happen this year.

“Oh, absolutely,” he said last week on Schefter’s podcast. “If there’s somebody who I know and trust and respect, felt like they needed me to help or to do something for them along the lines of assisting in any way that I can to help them be as good as they can be on gameday, I would do that in a heartbeat.”

The Bengals are 5-4 and in the thick of the AFC playoff race, which Lewis pointed to as a reason for firing Austin. They lost to the Saints 51-14 at home Sunday, became the first team in the Super Bowl era to give up 500 yards in three straight games and are on pace to allow the most yards in NFL history.

The Bengals play at Baltimore on Sunday. Jackson was quarterbacks coach for the Ravens in 2008-09 under coach John Harbaugh.

Browns players are scheduled to be back in Berea on Monday and meet with reporters. The reaction to Jackson’s next stop should be interesting.