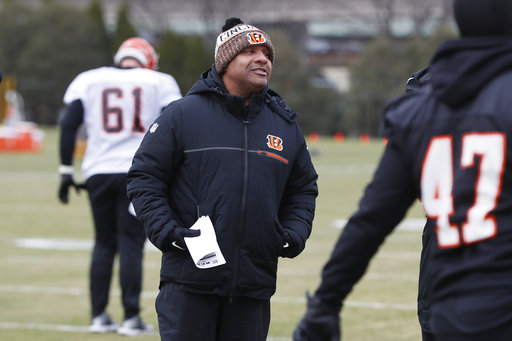 Cornerback TJ Carrie said the situation Sunday in Cincinnati will be “awkward.”

Browns players didn’t hide their astonishment at coach Hue Jackson taking a job Nov. 13 as special assistant to Bengals coach Marvin Lewis. Jackson had been fired by the Browns only 15 days earlier.

The Browns and Bengals will play Sunday in Cincinnati and Dec. 23 in Cleveland. A coach facing his former team within the same season appears to be unprecedented in NFL history. It’s certainly rare.

“Man, it’s going to be crazy. A lot of crazy stuff has happened,” Smith said Monday after the players returned from a week off for the bye. “I think everybody’s going to be ready and fired up for this one.”

Smith acknowledged Jackson’s deep knowledge of Browns players, playbooks, calls and signals could help the Bengals. Free safety Damarious Randall refused to concede the Browns will have to adjust.

The Browns face the Bengals twice a year inside the AFC North, so Randall believes each side already knows everything about the other.

“It’s a divisional game,” he said. “We knew what they were doing before he went over there and they know exactly what we’re going to do.

“At the end of the day, we’re just going to go out and punch them in the mouth — straight up. That’s exactly what you have to do on the road rivalry games. If that’s what we do, it doesn’t matter what they have over there.”

Browns at the bye: A look back at the first 10 games.

If interim coach Gregg Williams was bitter about Jackson joining the Bengals, he didn’t let on.

“I am happy for him,” he said. “He is a coach. He has been a coach for life. That is what you are supposed to do.”

Williams said he spent the bye week at team headquarters working. He didn’t use the time to change the play calls.

“I learned a long time ago that it is more important that we know what we are doing than somebody else,” he said. “That was pounded down my throat when I worked with Buddy Ryan many years ago. I brought up something just like you did, and he ripped me pretty good.”

Williams said his players don’t need any “extra juice” the quick reunion may bring. He’s grateful Jackson hired him in 2017 as defensive coordinator.

“He is a very smart coach,” Williams said. “Love the fact that he gave me an opportunity to come here and wanted me to come here.”

Smith compared facing Jackson and the Bengals to joint practices in training camp before a preseason game, as the teams become familiar with each other and their plays. He said the coaching staff might “tweak things here and there” this week but performance is what matters most.

“There is nothing private in our world anymore,” Williams said. “Every single clip of film is out there for everybody to watch. It is about execution. We have to go and execute.”

Randall was the first Browns player to react publicly to Jackson returning to Cincinnati, where he had been an assistant twice.

“In other words Hue we play the browns twice tell us what you know,” he tweeted last week, along with three loudly crying face emoji.

He was adamant Monday that Jackson’s move down I-71 doesn’t give the Bengals an advantage of any kind.

“The game is 11-on-11 up on the field and I don’t feel like them having him over there is going to give them no type of edge,” Randall said. “We don’t got nothing to hide over here, we’re here to play football and that’s exactly what we’re going to do.”

Jackson’s first game with the Bengals was a 24-21 loss at Baltimore on Sunday, and he stood on the sideline helping Lewis coach the defense.

“I watched the game Sunday, they looked like the exact same team,” Randall said. “I don’t know how much a coach can do in the middle of a season that can help the team, but I guess we’ll have to wait and see and just looking forward to the matchup.”

Zeitler spent four years in Cincinnati and 1½ years in Cleveland with Jackson. He called his return to the Bengals so soon “surprising” but explained the reasons it made sense.

“You never think that, but I’m happy Hue has another place to be,” Zeitler said. “Cincinnati’s always been good to him.

“It’s surprising, but him and Marvin have always had a good relationship and I know Cincy loves Hue.”

Zeitler wasn’t as certain as Randall that Jackson’s inside information won’t help the Bengals.

“Hue’s a smart guy, he knew what we were doing here, so you’ve got to assume they know everything and we’ll find a way around it,” he said. “I know our coaches are smart, too, we’ll come up with something.”

Condoleezza Rice not a candidate to coach but still loves her Browns
Damarious Randall on matchup with Bengals: If they don’t have A.J. (Green), they’re getting their ass beat