Notes: Browns come back from bye talking about making run to playoffs 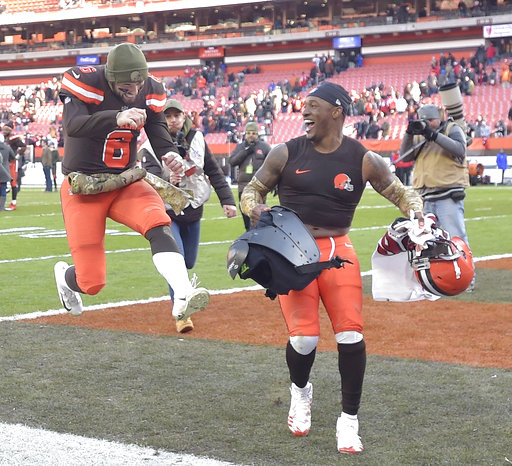 BEREA — The Browns returned from a week off for the bye full of energy and hope.

They felt so refreshed, they even talked about making a run at the playoffs despite their 3-6-1 record.

“We’ve got a lot of juice right now and we’re just looking to finish games because we’ve been in a lot of games this year and if we can finish the season strong, we can make a real late push at this playoff spot,” free safety Damarious Randall said Monday.

The Browns would likely have to finish 9-6-1 to earn a wild card spot in the AFC and no worse than 8-7-1. That means they would have to run the table over the final six weeks or lose only once.

But hope isn’t completely lost because several teams are bunched at 5-5 for the second and final wild card spot, leaving the Browns 1½ games off the pace. Miami, Baltimore, Cincinnati, Indianapolis and Tennessee are 5-5, with Denver at 4-6.

“If you can’t and don’t believe that we can make a playoff run, then you’re on the wrong team,” cornerback TJ Carrie said. “And I feel like from that standpoint we all have that feeling and that emotion about we can definitely do something very special and we’re capable of doing it. We have all the tools, the athletes and the ability to do that.”

Any run would include a win Sunday over the Bengals, who are three-point favorites. The Browns have lost 25 straight on the road, one off the NFL record set by the Lions from 2007-10.

“Hopefully we can put this in the (win) column and break that not winning on the road,” defensive end Chris Smith said. “To get to where we want to go, which is the postseason, you’ve got to win on the road.”

Randall was feeling particularly frisky. He dismissed the notion former coach Hue Jackson will help the Bengals in his new job as special assistant to the head coach and brought up the playoffs unprompted.

“We’re about to finish the season pretty good,” he said. “I’ve got a really good feeling about this. I’m healthy, feeling good, finally, haven’t been healthy since, honestly, Week 1.”

Randall has battled heel, groin and ankle injuries. He was talking about the Super Bowl before a four-game losing streak that ended with a win over the Falcons before the bye. He continues to lament three close losses and a tie that robbed the team of a realistic shot at making the playoffs for the first time since 2002, the longest drought in the league.

“That’s natural for us to look back and see the hole we dug for ourselves, but it’s also encouraging moving forward, because it would be different if we were 3-6-1 with six blowout losses and we didn’t have a chance in those games,” he said. “But four or five of those games could easily have gone the other way, but we’re not harping on it. We learned from it and we’re going to keep building on it.”

HAT IN THE RING

General manager John Dorsey said last week interim coach Gregg Williams “deserves” an interview for the full-time job and will get one following the season.

Williams will accept the invitation.

He wanted to keep the focus on the rest of the season.

“In all honesty, I can’t even think about anything other than the Bengals right now,” he said. “That is not fair to anybody.”

During the week before the Falcons game, Williams told quarterback Baker Mayfield to “cut it loose” and not be afraid to make a mistake. Mayfield wore a microphone for NFL Films during the 28-16 victory over Atlanta and had a message for Williams before the game.

“You will never worry about that with me,” Williams said.

The coach got a kick out of the banter.

The play of the line improved with Robinson. Mayfield was sacked twice against the Chiefs and wasn’t sacked by the Falcons, and he was highly complimentary of Robinson.

“We are going to stay with the competition on that,” Williams said. “Both of them deserve that. We will see how it goes come gameday.”

Center JC Tretter (high ankle sprain) was the only player who didn’t practice Monday. He’s been battling the injury for five weeks and hasn’t practiced much but hasn’t missed a snap in a game.

“It is the healthiest we have been since training camp,” Williams said.

** Linebackers coach Blake Williams has taken on greater responsibility with the defense since his father was named interim coach.

“He has been doing a ton of stuff for the two years that he has been here,” Gregg Williams said. “It is earned.”

** Defensive back Lenzy Pipkins (6-foot, 196 pounds) was signed to the practice squad. He was undrafted out of Oklahoma State in 2017, signed with the Packers and has started two of 15 career games with 23 tackles and a pass breakup.