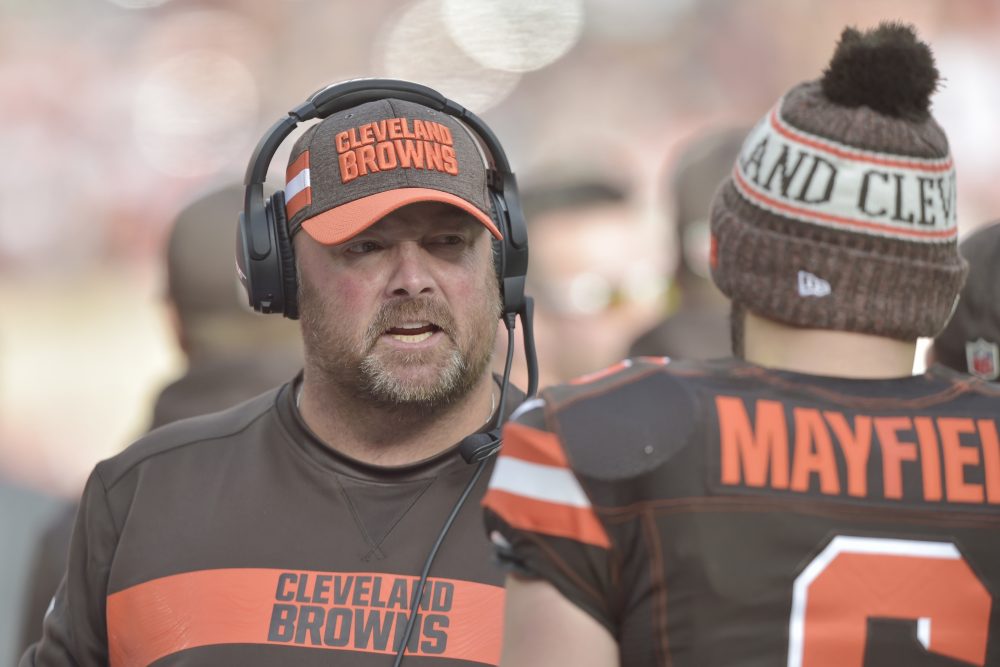 Freddie Kitchens thought — hoped might be more accurate — he was dehydrated. It was June in Arizona, after all.

The initial tests told a different, dangerous story. With a heart rate of “40-something” and blood pressure of “80-something over 40,” Kitchens was rushed to the hospital.

The news got worse.

He was diagnosed with an aortic dissection. The wall of his aorta had split internally, diverting blood from its intended destinations. The mortality rate was estimated at 80 percent.

“You find it through a CAT scan or usually an autopsy,” he told The Chronicle-Telegram on Tuesday.

Kitchens beat the odds, survived a seven-hour surgery, avoided the coroner, recovered in time for training camp that summer and remains in good health. He’s in his fourth week as Browns offensive coordinator and has been a stabilizing force for rookie quarterback Baker Mayfield since coach Hue Jackson and coordinator Todd Haley were fired Oct. 29 and he was promoted from associate head coach/running backs coach.

“He has helped Baker play really well,” said backup quarterback Drew Stanton, who followed Kitchens from the Cardinals in the offseason.

Kitchens is grateful to be alive and still be a husband, father and coach. He’ll take an extra moment around the Thanksgiving table, and away from the game plan for the Bengals, to reflect on that fateful day in 2013 during organized team activities for the Cardinals.

He didn’t have a George Bailey moment when he woke up after surgery in the intensive care unit but did find a greater appreciation for his friends and time spent with wife Ginger.

“I always felt like I lived life every day like it could be your last, but what an incident like that makes you realize and thankful for are the friends that you have,” said Kitchens, who had a physical six days before the dissection was discovered. “You find out how many people truly care about you and how many people you’ve impacted and didn’t even really realize it.”

The list is long. It starts in Alabama, where he was born, raised and started at quarterback for the Crimson Tide from 1995-97. It extends to Mississippi, Dallas, Arizona and Cleveland, the latest stops along his coaching journey.

“He’s a unique person to try to characterize or put in a box,” said Stanton, who was with Kitchens when he started experiencing symptoms. “It doesn’t give the full essence of who he is. He truly does care about everybody.”

“Freddie’s always loved life,” said NFL ON CBS analyst Bruce Arians, who was the Arizona coach when the scare happened. “Now there’s more of an appreciation for that love of life.”

The harrowing experience five years ago was about much more than the mesh tube and St. Jude Medical valve left in his chest.

Kitchens was flown by helicopter from one hospital to the Arizona Heart Hospital for surgery, but Arians beat him despite driving in rush hour.

“We’re landing the helicopter on the roof of the hospital and I see his car in the parking lot,” Kitchens said. “He made a 35-minute drive in 18 minutes.”

Kitchens, 38 at the time and Arizona’s quarterbacks coach, was greeted by Arians and several members of the Cardinals organization. When Kitchens met the surgeon, Dr. Andrew Goldstein, he told him he’d done his part by making it to the hospital and it was up to Goldstein to do the rest. They hit it off and remain close friends.

“I’ve done a lot of these kind of surgeries and people are usually pretty anxious, terrified,” Goldstein said by phone. “He was just really, really loose. I was just really impressed by how relaxed he was facing a very serious thing. As I got to know him afterwards, that’s just how he is.

“He puts everybody at ease.”

Ginger was across the country with their daughters, Bennett and Camden, now 15 and 13. The family spends summers in Virginia, where Ginger’s mom lives.

Ginger and the girls were at Busch Gardens — they have season passes — and her phone battery died. When they got in the car to drive home, she plugged it in and saw a stream of text messages and voicemails from Arizona numbers.

“My father had just passed away in March of that year,” she said. “So I was afraid that with all of these people calling me that it was something bad like that.

“I remember pulling over, getting out of my car under an overpass to make the phone call back. I was afraid with the girls in the car, I didn’t know what the news was, so I really didn’t want them listening to anything.”

She talked to team physician Dr. Wayne Kuhl and learned the situation was dire. She doesn’t usually take her driver’s license to the park but had it that day, so she dropped the girls off and got a ride to the airport.

“I literally spent the day at the amusement park in June in humid Virginia, then got right on the plane,” she said, adding the afternoon ended with water rides.

While she was flying to Charlotte, N.C., to catch a connecting flight, Kitchens was on the helicopter. Ginger got another update when she landed, then boarded the four-hour flight to Phoenix as Kitchens headed into surgery.

“Just really turning on my phone was the scariest part,” she said. “Not knowing what kind of message was going to be there.”

Kitchens was still in surgery when she arrived. She spent the next six weeks helping him recover and rehab, as the girls stayed with Grandma.

“She spent that whole summer taking care of me,” he said. “We just sat around together. Once you have kids you lose those times. That’s one thing I am thankful for from that incident.”

“It’s hard to say we had fun, but we had fun that summer,” Ginger said.

THE RIDE OF A LIFETIME

Aortic problems are genetic, but Kitchens was unaware he was predisposed.

“We didn’t know it ran in my family, so it ended up being a helicopter ride,” he said. “Hopefully not ever again.”

Kitchens and his daughters had discussed going in a helicopter while on vacation but Ginger was worried about safety and put her foot down. As Kitchens’ body began to fail and his life could’ve been flashing before his eyes, he pulled out his phone on the way to the Arizona Heart Hospital to capture the experience for the girls.

“You’ve got about an 18-inch hernia in your aorta, but that’s him,” Arians said.

“There’s a million stories of things not extravagant like he’s in a helicopter about to die and take a picture for the girls,” Ginger said. “But he definitely did.”

NFL Films did a piece on Kitchens last year and titled it “The Most Selfless Man in the NFL.” The league isn’t the Peace Corps, but that’s still quite a compliment.

“I thought it was nice that they said that, because I feel like that is very true,” said Ginger, who said Kitchens would race home when the girls were young to be there for bedtime. “But typically that’s something that just our family knows. It was nice that he got appreciated, you know.”

“Everybody is looking for credit and to elevate themselves,” Stanton said. “He just goes about his business and does his job. He doesn’t care who gets the credit. It’s a rarity in today’s NFL.”

Stanton was in the hospital on Christmas Eve one year after a knee injury got infected.

“It was not a fun Christmas,” he said. “Then Freddie showed up.”

“Freddie’s one of my favorite people on the planet,” he said. “Whoever meets him just falls in love with the guy. He’s genuine, he’s honest.”

Kitchens spent 11 years with the Cardinals and wrote a goodbye letter to the organization and fans when he took the Browns job. Goldstein said the people who helped in the surgery still ask how Kitchens is doing because he made a lasting impression.

“He’s unbelievably selfless,” Goldstein said. “Imagine growing up in a small town in Alabama, then you become the starting quarterback at the University of Alabama. Something like that could really go to your head. I would say he’s one of the most humble guys I’ve met, which is pretty remarkable considering his accomplishments.”

Kitchens’ future with the Browns is in flux because of the coaching search, but he’s making a case to be considered for a coordinator job here or elsewhere.

He’s gotten positive reviews in his two games as play caller, including a 28-16 win over the Falcons in which Mayfield threw for three touchdowns and posted a 151.2 passer rating and Nick Chubb rushed for 176 yards.

Arians was the Alabama coordinator when Kitchens was quarterback. He called him “Thick” because he was the beefiest quarterback in the SEC, said he was “tough as nails” as a player and groomed him to be a coordinator by putting him in charge of quarterbacks then running backs.

“I never doubted he’d be a good one,” Arians said.

“He was waiting for the opportunity for a long time,” Stanton said. “He’s gaining confidence with each and every play.

“People are now starting to realize how good a coach he is. And he’s not just a former Alabama quarterback who sounds like a hillbilly.”