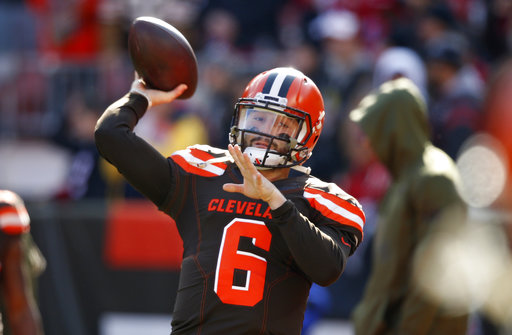 BEREA — If you wake up feeling dangerous, you better not be afraid to cut it loose.

Baker Mayfield played his best game as a pro in a 28-16 win over the Falcons before the bye. In the postgame news conference he dropped the line of the year.

“When I woke up this morning, I was feeling pretty dangerous,” he said Nov. 11.

He went 17-for-20 (85 percent) for 216 yards with three touchdowns, no sacks and a 151.2 passer rating in the first game since interim coach Gregg Williams said the next step for Mayfield was to “cut it loose” and not be afraid to make a mistake.

“I think it went beyond playing-on-the-field type of stuff,” Mayfield said Wednesday. “I think that him saying to cut it loose to me meant letting my personality go. The reason that I was brought here is because of that stuff — the infectious energy, the passion for the game that I try to bring every day. I think it was more than just the on-field play.”

Mayfield spent part of the bye week with Christian Yelich of the Milwaukee Brewers as he was named the National League MVP. He returned to Northeast Ohio with a singular goal for the final six games.

The Browns are 3-6-1 heading into the game Sunday in Cincinnati. They’d likely have to sweep the remaining six games to earn an AFC wild card spot, giving them seven straight wins.

They haven’t won consecutive games since three in a row in the middle of 2014. The franchise hasn’t won six straight since 1986, and the most recent run longer than that was eight in 1968.

The astronomical odds of the Browns making the playoffs — the proposition bet is off the board on gambling site Bovada.lv — haven’t stopped the players from clinging to the hope coming off the bye.

A more logical reason to be optimistic is Mayfield’s development as a rookie. In two games under new coordinator Freddie Kitchens, Mayfield is 46-for-62 (74 percent) for 513 yards, five touchdowns, an interception, two sacks and a 118.6 rating.

He was in top form against the Falcons, completing 13 straight to start the game and posting career highs in completion percentage, touchdowns and rating.

He was asked if the improved performance should be attributed to the shakeup that saw coach Hue Jackson and coordinator Todd Haley fired Oct. 29, changes in personnel or personal growth.

“It is a mix of all of it,” he said. “It is our guys believing in it, knowing that we do not need anything else besides what we have in this locker room, blocking out the distractions and coming together.

“Things happen, and you can use it for good. We did. Focusing on doing our job. I have talked about that the whole season and then we finally realized that if we just do our job, our 1/11th when we are out there playing, then we can get things done.”

The Falcons game wasn’t the first time Mayfield entered the danger zone. He said his family texts him before games and “feeling dangerous” is the response he’s given for the last couple of years.

“That is nothing new for me,” he said, adding he’s working on getting the phrase trademarked. “That is just the first time I have said it in a press conference.”

“He actually told me that (before the) Baltimore game, and that game we won,” receiver Rashard Higgins said. “So I need him to feel dangerous a long time.”

Mayfield said he reserves the attitude for special occasions.

“I am feeling good right now,” he said. “It is not gameday.”

“I might have to this Sunday,” he said. “That was an all-timer. That was a good quote.”

Despite the bluster, catchy slogan and gunslinger reputation, Mayfield does his best to avoid danger with the ball in his hands. He’s repeatedly called eliminating mistakes the key to his development.

That doesn’t exactly mesh with Williams’ message to let it rip, so he’s working to walk the fine line.

“There are smart decisions and then there are careless (decisions),” said Mayfield, who wore a Bowling Green sweatshirt during the interview because he knows some coaches on the staff and the quarterback. “Playing aggressive and playing on that line is something that he talks about. You have to be able to do that. You have to be able to find the little balance right in between that.”

Facing the Bengals (5-5) provides a golden opportunity to continue his progression. Their defense ranks last in the league with 449.4 yards allowed a game and is on pace to give up the most in NFL history. It ranks last on third down (55.5 percent conversions) and 31st in scoring (31.2 points).

“Baker’s Baker,” running back Duke Johnson said. “He goes out there and he makes plays for us, he gives us a good chance to win.”

“He’s an expert at what he does,” Higgins said. “That’s why he plays quarterback, and we expect that from him. Y’all see it. We see it. He’s going out to win every game.”