A lot at stake vs. Bengals and Hue Jackson — avoiding road infamy, starting to string wins 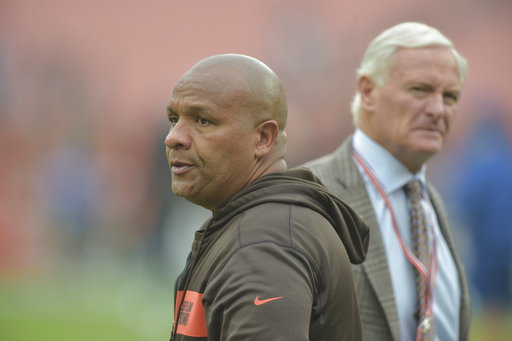 CINCINNATI — Duke Johnson has experienced a lot in his four years with the Browns.

Almost all of it alternating between bad and ugly.

Johnson lost his second head coach when Hue Jackson was fired at midseason. He’s back in the Browns’ lives much sooner than anyone anticipated, taking a job as special assistant to Bengals coach Marvin Lewis on Nov. 13, 15 days after he was fired by the Browns following a 3-36-1 record in 2½ years.

“Definitely unique. I’ll give you unique,” Johnson said. “But I’ve played for the Browns for the last four years, so nothing really surprises me anymore.”


The Browns (3-6-1 after a win before the bye) and Bengals (5-5) tried to downplay the significance of Jackson landing another job inside the AFC North and the impact he’ll have on the outcome. Regardless of the role he plays — strategically for Cincinnati, motivationally for Cleveland — plenty is at stake Sunday afternoon in the renewal of the rivalry.

The Browns have lost 25 straight on the road and need a win to avoid tying the NFL record held by the 2007-10 Detroit Lions. They haven’t won consecutive games since the middle of the 2014 season. They’ve lost seven straight to the Bengals, Cleveland’s longest skid in the series.

Already this season the Browns snapped a 19-game winless streak overall and an 18-game winless stretch inside the division. Johnson isn’t excited about the chance to check off two more boxes.

“Making the playoffs is a milestone,” he said. “It’s not winning two in a row, not stopping the streak.

The attitude is admirable and appropriate. But following 1-15 and 0-16 seasons, each victory is considered a giant step forward. So interim coach Gregg Williams started the week by reminding his players of the road drought.

The last win away from the lakefront was a 33-30 overtime thriller Oct. 11, 2015, in Baltimore with Josh McCown at quarterback.

“You’ve got to win on the road at some point to be a good team in this league,” left guard Joel Bitonio said. “It’d be great for us. It’d be another step in the right direction.”

The Browns have been close in three of the four road games this year, losing 21-18 to New Orleans and in overtime to the Raiders and Buccaneers. The post-bye schedule features four trips in six games.

“I like beating people away,” defensive end Myles Garrett said. “I will definitely be amped to make some big plays.”

“It’s time to definitely get one on the road,” receiver Jarvis Landry said.

The Browns’ sights are set much higher than a single win down I-71. They think they can make something special of the season.

During his locker room speech after the 28-16 win over the Falcons before the bye, Williams asked if the players believed. He promised a game ball for all players and coaches and ordered “Believe” to be put on them.

“It was great to see them rise up and believe we can play that kind of a football game,” he said. “They have to believe it.”

The players said that’s easier after a few wins and being surrounded by more talent than in years past.

“So there is a belief that we can go out there and beat anybody we play,” Bitonio said.

“That’s how we should play every week, and if we do that, there’s no telling what we can do,” middle linebacker Joe Schobert said.

The confidence was obvious in the number of players who discussed making a run at the postseason, despite the 3-6-1 record. A team that’s won seven games since the start of 2015 would likely have to end the year on a seven-game streak.

The slim-to-none chance is enough to get Johnson excited.

“It’s easy to believe because it’s right there, we can see it, it’s possible,” he said. “Yeah, it may not be easy but it’s possible.”

The 12-point win over the Falcons was Cleveland’s first by multiple scores since 2015. The well-rounded effort sent the players into the bye and they returned buzzing.

No one more than free safety Damarious Randall. He started the week by being the first to mention the playoffs and said the Browns wouldn’t change “sh–” because of Jackson’s extensive knowledge of the team.

“It’s a divisional game,” he said. “We knew what they were doing before he went over there and they know exactly what we’re going to do. We’re just going to go out and punch them in the mouth — straight up.”

Randall also ended the week with a flourish, guaranteeing a win if Bengals receiver A.J. Green doesn’t play because of a toe injury. He was downgraded to doubtful Saturday.

“If they don’t have A.J., they’re getting their a– beat,” Randall said.

The Bengals have lost two straight and four of five. They have the worst defense in the league at 449.4 yards a game, on pace for the most allowed in a season in NFL history.

The Browns insisted Jackson joining a rival so quickly didn’t bother them. They may tell a different story after the game, until then, the reunion adds intrigue.

“Man, it’s the league. Everyone here knows what kind of business this is. You can’t get your feelings hurt,” strong safety Jabrill Peppers said. “We wish him the best but we’re still going to go out there and kick their a– Sunday.”