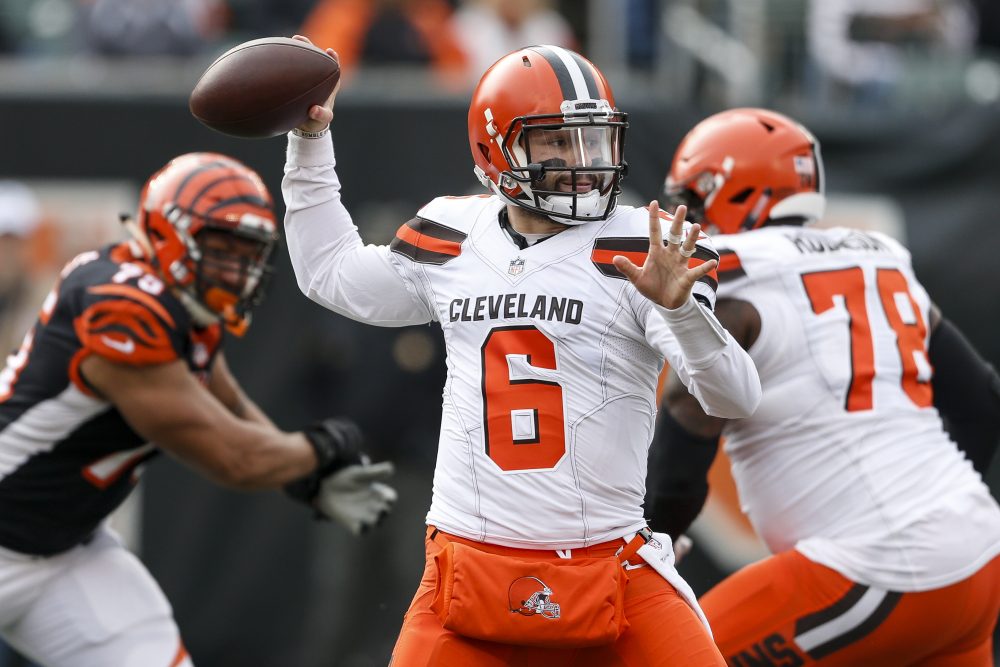 He emphatically played air drums to Phil Collins’ overplayed “In the Air Tonight” during the pregame warm-up, then orchestrated a convincing 35-20 win over the Bengals that exorcised more demons in what’s become a turnaround season for the franchise.

Mayfield revealed after the pre-bye win over the Falcons he woke up “feeling dangerous.” He looked loose yet in complete control Sunday as the Browns buried the Bengals early.

“Pregame dancing? You got Philly Collins playing the drums,” he said. “As the experience continues, the comfortability grows. There’s really nothing else to that.”

The Browns have won consecutive games for the first time since 2014, largely because Mayfield played his two best games as a pro. He built on a career-high 151.2 rating against Atlanta by going 19-for-26 for 258 yards, four touchdowns, no sacks and a 143.9 rating against Cincinnati. He averaged 9.9 yards per attempt.

He threw only four passes in the second half as the Browns nursed the huge lead and ended a 25-game road losing streak.

Mayfield has 17 touchdown passes in his nine games, surpassing Tim Couch’s 15 in 1999 for the franchise’s rookie record.

“Baker’s starting to get in a rhythm, he’s starting to bring that swagger to us,” free safety Damarious Randall said. “Hey, this team’s scary. That’s the only way I can put it in words.”

“That’s what I wanted to get accomplished,” he said after knocking on the wooden podium. “That’s taking care of the ball. That’s putting us in a good position to win.

“Two games in a row, no sacks, no interceptions, that’s the goal, and that needs to be the mentality.”

“We’re taking the next step,” interim coach Gregg Williams said of Mayfield. “I’m not making today’s win less than what it is, but our focus is gradual progress.

“He took a step again today, and I thought he did a good job with that. I always call it gradual because I believe we always have room to improve. We haven’t made it yet.”

Mayfield, coordinator Freddie Kitchens and the offense set the tone early. The Browns scored touchdowns on their first four possessions and made it look easy.

They had drives of 78, 56, 96 and 59 yards to go up 28-0 with 2:25 left in the first half. Kitchens, in only his third game calling plays, was nearly flawless with his opening script, keeping the Bengals’ last-ranked defense off-balance with a wide variety of formations and calls.

He mixed runs and passes on the first drive. He called five straight passes on the second drive, going to the hurry-up and emptying the backfield. He turned to a lot of three-tight end sets on the 12-play, 96-yard march that used 5:47.

Former Browns coach Hue Jackson, who’s working for the Bengals, sought out Mayfield before and after the game. Mayfield shook his hand both times but kept the meetings brief. After the one in pregame, he walked away and clapped forcefully to himself.

“I didn’t feel like talking,” he said, adding he wasn’t cool with Jackson joining the Bengals only 15 days after being fired by the Browns.

But he wouldn’t blame Jackson or fired coordinator Todd Haley for the team’s 2-5-1 record when they were dismissed.

“We still have the same players. We just had to play better,” Mayfield said. “We have people that we believe in calling the plays now.”

He said he wasn’t taking a shot at Haley or trying to make a headline.

“We just didn’t execute,” he said. “It’s the fact that we didn’t do our job then, but right now Freddie has us believing in it and that’s what it comes down to.”