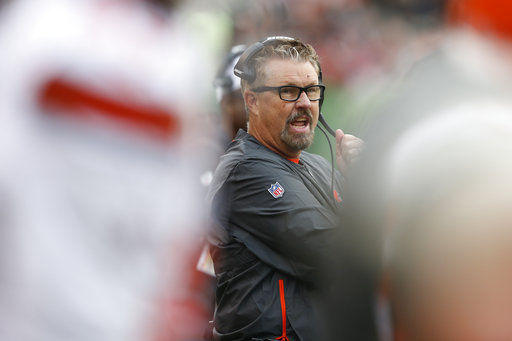 Gregg Williams is 2-1 as interim coach. With the next win, he’ll tie Hue Jackson, who needed more than two years to win his third game with the Browns and was 3-36-1 when he was fired Oct. 29.

Center JC Tretter didn’t hesitate when asked for Williams’ impact on the turnaround.

“Discipline has been great,” he said Monday on a conference call. “It’s something that we desperately needed.

“He’s really reined everybody in and got everybody focused on one single goal. His leadership has been very strong. He fires up the team. He’s got that personality. He’s done a great job of just kind of rallying the troops to one cause and I think you see that on Sundays.”


A lack of discipline takes many forms. Under Jackson, the problem was evident in penalties, missed assignments and failures in clutch situations.

The penalties have dipped from more than eight a game — tied for the most in the league — to six a game under Williams, but he wasn’t satisfied after seven for 61 yards Sunday in a 35-20 win over the Bengals.

“We committed some penalties on plays that extended drives for them, and that’s not who we are,” he said after the game.

But the overall performances have been much crisper in Williams’ three games, including two straight wins. Tretter said Williams has made clear his expectations for everyone on the team.

“They’re spelled out for you, there’s no confusion about what’s going on,” he said. “Every meaning hits on the same points over and over again, where there’s really no gray area of what’s expected of each player on this team. That has really helped us take that next step.

“Obviously you always worry about that with a midseason transition, but Gregg’s done a great job of rallying the troops and getting everybody on the same page.”

Williams will interview for the full-time job after the season but remains a long shot to land it. He said it wasn’t a challenge to instill discipline when he took over with the team 2-5-1 and on a three-game losing streak.

“I believe this and I have believed this my whole life: We as athletes, we as young men and we as grown men, we crave discipline,” he said. “We want discipline. We just want fair discipline and understand that discipline simplifies a lot of the things in our life. It is when all of a sudden other things slide by or other people do not have to do what other people have to do that is when things start to tear you down from the inside.”

Williams made it clear he didn’t ride into town like a new sheriff and lay down a bunch of laws.

“I do not want to overblow it at all — I say what I mean and I mean what I say,” he said. “It is about being on time, doing things the right way, not doing things halfway and doing things all of the way.

“And then he’s a good public speaker,” Schobert said. “He’s a good leader from the front, so he has good messages and team meetings and the team has been rallying around behind it after Hue and Todd (Haley, offensive coordinator) got let go a couple of weeks ago. Everybody kind of needed to refocus, and he’s done a good job of keeping everybody refocused.”

STEPPING IN, AND UP

The offensive line took a big jump when Greg Robinson entered the starting lineup at left tackle three games ago in place of undrafted rookie left tackle Desmond Harrison. Baker Mayfield was sacked twice against the Chiefs and not at all the last two games.

“Greg has solidified that left tackle position for us. I think that has helped out quite a bit with our progression as a team,” center JC Tretter said. “Greg has done a great job out there, especially in pass protection and then in the run game.

“He is a big, strong dude. He can move people in the run game. Greg has been a big part of getting that run game going in the weeks prior.”

Williams won’t publicly commit to Robinson as the starter moving forward but the job is his.

“He has done a very good job week by week,” he said. “I thought he played very well yesterday.”

Tretter hasn’t missed a snap since suffering a high ankle sprain Oct. 14 against the Chargers, but it continues to bother him.

“It has been a battle every week,” he said. “Some weeks have been better than others. It is one of those things that you know that when you play on it, it is going to get worse.”

Tretter has practiced only on Fridays since the injury and spent extra time with the medical staff.

“We have done a good job of kind of limiting the amount of exposure that I have for setbacks,” he said. “It has taken a lot of work. It will probably be an issue here for a few more weeks, but we will just keep working through it.

“I always go into a season with the goal of playing in all 16 games and playing every snap. That is something that I take a lot of pride in.”

He became a full-time starter for the first time last year and played every snap.

Schobert is back. He played every snap against the Bengals in his second game since returning after missing three with a hamstring injury. He hadn’t missed a snap in more than a year before the injury and was limited in his first game back before the bye.

“It felt great just to be out there doing what I’ve been doing for the last couple years and not really have to worry about it,” he said.

** As part of the group that pushed tight end David Njoku into the end zone, Tretter had a good view of the play in which Njoku jumped at the 5-yard line and landed at the 2.

“David had quite the leap,” Tretter said. “He was ambitious with that attempt. Luckily, there were a few guys following the play. I think that he covered half of the distance and we got him the other half of the way.”