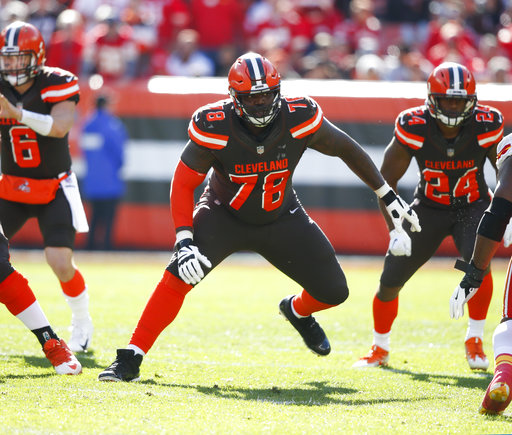 BEREA — Greg Robinson was a bust with the Rams and injured with the Lions.

He isn’t about to blow what he called his “third chance” with the Browns.

“Ever since I came in the league, I was just waiting on my moment to really sit back and say, ‘Oh, I got this,’” he said Thursday. “I feel like this is that moment and I don’t want to let go. Just continue to grind and take advantage of the opportunity.”

Robinson was the No. 2 pick of the Rams out of Auburn in 2014. He started 42 games in three years but was demoted then traded to the Lions in June 2017 for a sixth-round draft pick. He started six games with the Lions before an ankle injury sent him to injured reserve.

The Browns signed him as a free agent June 19, adding him to the pile of left tackle possibilities. He finally found his way onto the field in Week 9 and quickly locked down the starting job.

“You can see why he was the No. 2 pick coming out of college, physically gifted, strong, fast, he gets after some people,” right guard Kevin Zeitler said. “He’s here, he’s taken advantage of the situation when he was given the opportunity.”

Robinson admitted the expectations that come with being such a high pick can get “overwhelming at times.” He mentioned inconsistent play, injuries and a lack of talent around him as stumbling blocks early in his career but said he learned from the setbacks.

“You have to come in and stay focused each day, take advantage of each day you have in the building because any day could be your last,” he said.

Robinson (6-foot-5, 330 pounds) has been one of the bright spots of the second half of the season. He stepped in for undrafted rookie Desmond Harrison at left tackle three games ago and solidified a struggling line. The Browns have allowed two, zero and zero sacks — two straight games without a sack for the first time since 2007 — while going 2-1 and generating playoff talk.

“I didn’t really like sitting on the bench, but that’s the situation I was dealing with,” Robinson said. “I can just take advantage of each opportunity I can get because any day this could be over.”

He played his best game Sunday in the 35-20 win over the Bengals, according to coordinator Freddie Kitchens, who said Robinson’s won his one-on-one battles. Baker Mayfield had plenty of time to survey the field as he threw four touchdown passes.

“He’s been a big, physical presence for us,” Mayfield said. “That’s what we wanted. We wanted somebody to establish that left edge, be physical and set the tone.”

Mayfield has been a vocal supporter of Robinson since he replaced Harrison, who couldn’t handle the bull rush. Mayfield was demonstrative with Robinson in pregame Sunday, chest-bumping and playfully pretending to punch him.

“Yeah, that’s my boy,” Robinson said. “Just an exciting guy. He’s full of energy, and I appreciate it because some days I’m down, and guys like him pick me up throughout the day.

“It’s all encouraging just to know the guys you are playing with think highly of you. It allows you to go out and play freely. It all goes into the trust factor.”

Robinson, 26, has learned to trust himself.

“I feel regardless what someone thinks of you you are supposed to have some type of belief in yourself,” he said.

Kitchens backs Mayfield after backlash to his comments about Hue Jackson.

Robinson and the Browns line, ranked third by Pro Football Focus, will have their hands full Sunday in Houston with what Kitchens called the league’s best front seven. The Texans are tied for sixth in the league with 34 sacks, led by J.J. Watt (11.5) and Jadeveon Clowney (seven). Robinson will see both on his side but likely more of Clowney.

“It’s make or break. They’re good players,” Robinson said. “It is going to be a good challenge. I am up for it.”

He credited strong communication and trust for the improvement of the line and wasn’t in awe of the Texans.

“Oh, we’re going to keep him clean,” he said of Mayfield.

Robinson is playing on a one-year, $790,000 contract and would be in line for a huge raise if he keeps up his strong play. Left tackle remains in transition for the Browns since the retirement of Joe Thomas in March, and Robinson is a candidate to fill the void long term.

He isn’t focused on the future but said he “100 percent” would like to stay. He wants everyone else to determine if this is the best he’s played in his career.

“But I feel great and it’s encouraging,” he said.

Players across the league are participating in “My Cause, My Cleats,” a league program to draw attention to causes the players support.

“It hit home for me,” Robinson said. “I feel like I couldn’t overlook the fact that that area needs attention.”