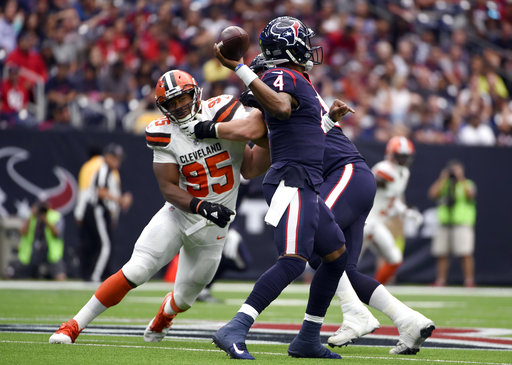 BEREA — Gregg Williams, in his role as defensive coordinator, was asked to evaluate the quarterbacks in the 2017 draft. The assignment included watching film of Deshaun Watson and interviewing him during a visit to Browns headquarters.

“Really liked him a lot,” Williams, the interim coach, said Friday. “He had all of the makings.

“That whole class of guys turned out to be pretty good.”

Chicago traded up and took Mitchell Trubisky with the No. 2 pick, Kansas City traded up to get Patrick Mahomes at No. 10 and the Texans traded with the Browns for the No. 12 pick and the chance to grab Watson.

The Browns, in desperate need of a quarterback, passed on all three. With Williams and then-coach Hue Jackson applying extreme pressure, then-head of football operations Sashi Brown selected defensive end Myles Garrett with the No. 1 pick.

Williams would do it again.

Garrett has already faced the trio of Trubisky, Mahomes and Watson, who have their teams in first place in their divisions. He’s grateful the Browns picked him.

“Just gotta prove that they made the right choice,” Garrett said.

Garrett and Watson will meet for the second time Sunday in Houston. The Texans are the first team to win eight straight after losing their first three and they’re driven by Watson, a dual threat.

“A guy who likes to hold onto the ball but also likes to scramble,” Garrett said. “He’s quick, he’s elusive and he can make plays down the field. So I have to make sure we can keep him in the box and trapped.”

Watson ranks 11th this year with a 101.0 passer rating and seventh with 8.43 yards per attempt. He’s has been sacked 37 times, which would normally widen Garrett’s eyes. But he said Watson’s ability to escape means he’ll have to be careful on his rushes to make sure Watson can’t scramble around the corner.

“He does give you a lot of opportunities (for sacks), but those times you don’t get him, he’s throwing it to Hop (DeAndre Hopkins) for a touchdown,” Garrett said. “So you have to make sure you get him to the ground. You can’t let him dance back there forever or extend it out.”

“He’s one of the best defensive linemen of this decade,” Garrett said of Watt. “But that’s it. You’ve got to prove it every week just like anybody else.”

As Garrett downplayed the meeting, he said he doesn’t use Watt as a measuring stick.

“I want to be the best me I can be every week and I feel like that’s who I put on film,” he said. “It just depends on what I do. He’s up there, but if I’m to pass him, who’s next? So you’ve got to keep on trying to exceed yourself.”

Garrett has 17 sacks in his first 22 games, which ranks fifth among active players — Watt had 15 — and tied for ninth all time. It’s the best start in franchise history.

After a rookie year with 5.5 sacks after being the No. 11 pick in 2011, Watt exploded with the three Defensive Player of the Year honors in the next four years. He has 87.5 sacks and 20 forced fumbles in his career, and his .88 sack a game is the highest average in league history.

“He can do it all,” Garrett said. “He can play the run, play the pass, beat you around the edge, beat you inside, go through you. I mean, there’s no way he’d be able to have two 20-sack seasons by just being one-dimensional.”

Williams sees some of Watt’s attributes in Garrett and said they’ll continue to improve with experience. The decision to draft Garrett and trade the No. 12 pick to the Texans ended with the Browns having Garrett, safety Jabrill Peppers, cornerback Denzel Ward and quarterback Baker Mayfield.

Williams will take the haul.

“It is not anything to do knocking Deshaun at all how it ended up with him,” he said. “People saw how much they wanted him with the interest level down there of what the Texans went about doing it. Pretty good here, too, on how it has all shaped out. Whoever could predict their future did a good job.”

Left tackle Greg Robinson determined not to blow “third chance,” ready to seize moment
Belief in offense to be tested against streaking Texans