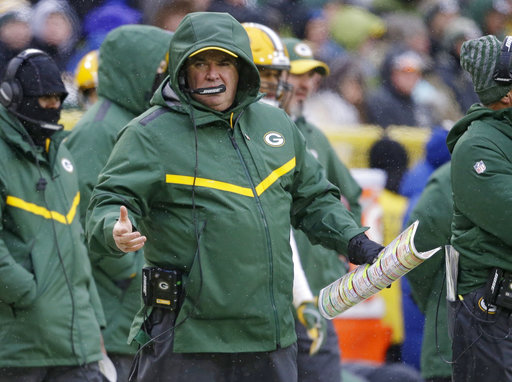 BEREA — Mike McCarthy should include JC Tretter as a reference on his updated resume.

Tretter was with McCarthy for four years in Green Bay before signing with the Browns in 2017. McCarthy was fired Sunday after 13 years as coach of the Packers, including a Super Bowl win after the 2010 season.

“I’ve always enjoyed working with Mike McCarthy,” Tretter, who’s started 28 straight games at center for the Browns, said Monday. “I think what he has done in his career in Green Bay has been extraordinary.

“I think he’s a great man, too. I don’t have a bad thing to say about Mike McCarthy. He was really an awesome leader and an awesome coach.”


Tretter said McCarthy would be a fit for the Browns, who are looking for their ninth full-time head coach after firing Hue Jackson on Oct. 29. But Tretter said he trusts the front office to make the right hire and doesn’t feel the need to walk upstairs and give a scouting report on McCarthy.

The decision-makers already know him.

General manager John Dorsey, who’s leading the search, was Green Bay’s director of college scouting, part of the search that landed McCarthy in 2006 and spent seven years with him. Assistant general manager Eliot Wolf worked for 14 years in Green Bay before joining the Browns in January and is close with McCarthy. Vice president of player personnel Alonzo Highsmith was in Green Bay the previous 19 years before being hired by Dorsey.

“They know enough upstairs,” Tretter said. “I don’t think I can bring anything more to the table than they already know. I’m just looking forward to seeing the direction we go with this team.”

Commentary: Browns’ resurgence should be celebrated, but it took too long

The search isn’t expected to pick up steam until the regular season ends Dec. 30, but McCarthy could be interviewed at any time. The list of potential candidates includes Oklahoma’s Lincoln Riley, Chiefs assistant head coach/special teams coordinator Dave Toub and Chiefs offensive coordinator Eric Bieniemy, but the only candidate acknowledged by Dorsey is interim coach Gregg Williams, who Dorsey said will get an interview.

Williams is 2-2 since stepping in for Jackson, including a 29-13 loss Sunday in Houston to drop the Browns to 4-7-1. He’s considered a long shot to keep the job.

Tretter refuted two of the knocks on McCarthy, who went 125-77-2 (.618 winning percentage) in the regular season and 10-8 in the playoffs. The Packers went to the postseason eight straight years before missing last year and starting 4-7-1 this season.

The combative nature of McCarthy’s relationship with quarterback Aaron Rodgers, a two-time MVP, has been the subject of much speculation, but Tretter has consistently said too much is made of that.

“That whole story line gets a little overblown,” he said. “They are just two competitive people. I never see it as a competitiveness in a bad way, they just are very confident in what they think is best for the team to win.”

A requirement of whomever the Browns hire will be the ability to nurture and develop rookie quarterback Baker Mayfield. Tretter said McCarthy fits the bill.

“I think they would do great,” he said. “He started working with Aaron when Aaron was (in his second year) and Aaron’s developed into a helluva player, so I think that relationship would be fine.

“I see a lot of similarities between Aaron and Baker personality-wise, competitiveness, and that’s all the things that Aaron came in with, too, when he was a young player, so I think they’d work well together.”

McCarthy, 55, was a quarterbacks coach for five years and an offensive coordinator for six before being hired as coach of the Packers. Green Bay’s offense consistently ranked in the top 10 in yardage and scoring, including leading the league in points in 2011 and ’14, but McCarthy has been criticized lately for a stale system and not having the creativity of the Rams’ Sean McVay and the Chiefs’ Andy Reid.

Tretter blamed a false narrative that’s been regurgitated. He said McCarthy shouldn’t be judged on 2017 because Rodgers was injured for much of the year, and that this year the Packers were close but things didn’t “break their way.”

“I don’t think he’s stubborn in a way that he wouldn’t adjust or change his offense,” Tretter said.

He said McCarthy’s tenure should be evaluated on its entirety, pointing to a run of success that trailed only the Patriots and perhaps the Steelers over the last decade.

“There’s not many franchises that would trade what he has done or pass that up,” Tretter said.