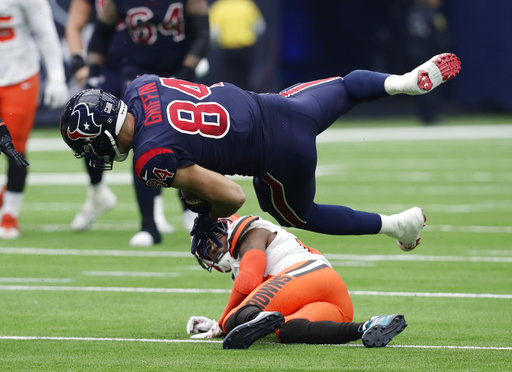 BEREA — Free safety Damarious Randall is glad to be gone from Green Bay.

He’d be happy to see his former coach follow him to Cleveland.

“Mike McCarthy is a great, great coach,” he said Thursday. “I’ve got nothing but the utmost respect for him. I just wish him the best. I don’t know why they fired him. He is definitely a good, good guy, and he’s a great coach.”

McCarthy was fired Sunday after 13 years and a Super Bowl title with the Packers.

Randall was drafted 30th in 2015 by the Packers and had a bit of a rocky tenure before they traded him to the Browns in March for quarterback DeShone Kizer. Randall said McCarthy wasn’t the issue.

“Me and him never had any type of problems,” he said. “He’s a great coach. I would look forward to him being here.”

Center JC Tretter spent four years in Green Bay and was highly complimentary of McCarthy on Monday. He and Randall objected to the criticism that McCarthy hasn’t been able to keep up with the changes in the NFL game.

“They traded away all their good players and they expect Aaron Rodgers to just be magical,” Randall said. “The magic hasn’t been so magical lately.”

One of those trades has worked out well for the Browns, as Randall has solidified the back end of the secondary after playing cornerback in Green Bay. He has three interceptions, eight passes defensed, a fumble recovery and 64 tackles.

“I don’t know what they were doing, but it is what it is,” he said of the trade.

Randall should get consideration to make the Pro Bowl for the first time and has been actively campaigning for fan votes on social media.

“I’m just thinking about doing whatever I can to help my team win games,” he said. “If that comes with the Pro Bowl, I would definitely take it.”

He believes he’s having a Pro Bowl-caliber season.

“Yeah, definitely,” he said. “I feel that I’ve been one of the best safeties in the league, just like I preached before the year.”

The loss Sunday in Houston dropped the Browns to 4-7-1 and reduced their chances of making the playoffs to 1.1 percent, according to Numberfire.com. Randall believes they can beat the odds.

“I feel like if we win out, I feel like things will work itself out and we will end up in the playoffs,” he said. “We’ve got the opportunity to finish 8-7-1 and I’m sure if I would’ve told you guys that before the season, you all probably would’ve laughed at me. It is definitely a lot of positives to take up out of this season, but we’re still pushing forward and we’re definitely still looking for that last playoff spot.”

Linebacker Christian Kirksey was chosen as the team’s nominee for the NFL’s Walter Payton Man of the Year Award, which recognizes performance on the field and commitment to the community.

“I’m honored. I try and do as much as I can in the community, try to be a positive role model, influence a lot of people,” Kirksey said. “How I’m viewed by my peers definitely humbles me and I just want to continue to do good things.”

Kirksey is on injured reserve after hurting a hamstring Nov. 4 against the Chiefs. In seven games he had 43 tackles, two interceptions, five passes defensed and a fumble recovery. He had career highs in tackles (138), sacks (3.5) and forced fumbles (two) last year and played every snap.

Off the field, he launched the Kirkoland Foundation, striving to provide opportunities for local kids in need. He’s also visited Cleveland neighborhoods alongside safety forces to meet with kids, been a leader in the team’s commitment to social justice and volunteered in the organization’s programs to help education and youth football.

“Since Christian was drafted in 2014, he has been an incredible influence and provided a positive energy for our team and building, as well as throughout the entire Cleveland community,” owner Dee Haslam said in the news release.

He wasn’t ready to say he’ll be able to play Sunday against the Panthers.

“It will be more of a gametime decision,” he said. “Right now, we’re just trying to progress and trying to make sure everything is solid before we make any serious decisions. I’m still testing it, still trying to see how it feels.”

Ogunjobi wouldn’t reveal the nature of the injury, but the muscle is likely torn to some degree. He didn’t play in the second half against the Texans and got a second opinion.

Ogunjobi said he has a high pain tolerance and could play through a tear.

He was encouraged by the work in practice, which included a sack.

“I was able to go through the practice, felt well, nothing was hurting too bad, so we’re just playing it by ear,” he said.

Versatile running back Duke Johnson missed a second straight day with an excused absence to deal with a personal issue. Williams was hopeful he’d be back Friday and ready Sunday.

** Center JC Tretter practiced on a Thursday for the first time since suffering a high ankle sprain Oct. 14 against the Chargers. He was limited. He had been practicing only on Fridays.

** Cornerback Phillip Gaines (knee) was limited after not practicing Wednesday.

Former Browns linebacker Clay Matthews would get Williams’ vote for the Pro Football Hall of Fame.

“Clay was a dominant player that you had to offensively take note of at all times,” he said. “His ability to violently — and I mean violently — crush the pocket when he rushed the passer.”

** The Browns practiced outside in the snow for the first time this year.

“It was all right today,” receiver Jarvis Landry said. “It was cold. Hopefully we’ll be inside tomorrow.”

** The Browns and local Marines will host their annual toy drive benefiting Toys for Tots before the game Sunday. Fans are encouraged to bring new, unwrapped gifts of at least $10 in value.

Notes: Terrance Mitchell to be counted on in return as Denzel Ward remains in concussion protocol
Notes: Myles Garrett studied Julius Peppers, came away impressed with his motor and efficiency