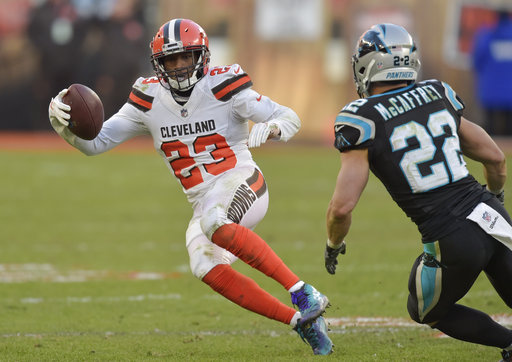 BEREA — Damarious Randall is straddling the line between dreamer and realist.

The free safety, who’s been talking playoffs for longer and more often than his teammates, summed up the state of the Browns’ playoff chances in four sentences.

“We feel like we’re a playoff team,” he said Tuesday. “We feel like we deserve one of them six spots. We know we dug ourself in a hole and we know that we need some help. It starts with us winning out and that’s exactly what we gotta do.”

At 5-7-1 with three games left, saying the Browns are “in the hunt” is generous. Numberfire.com puts their chances of reaching the playoffs at 3.4 percent, while the New York Times’ simulator has them at 1 percent.

The first step is sweeping the remainder of the schedule, which would mean wins at Denver on Saturday, home against Cincinnati on Dec. 23 and at Baltimore on Dec. 30. Then the Browns need a lot of help.

Ideally, the Steelers at 7-5-1 and the Ravens, Titans, Colts and Dolphins — all at 7-6 — would suffer loss after loss. Tennessee plays at the Giants on Sunday, and the Giants travel to Indianapolis the following week, so coach Pat Shurmur’s resurgent New York team could bolster the hopes of his former team.

“We’re just going to take it as just win out and everything else is going to take care of themselves and we don’t need to worry about let’s watch to see if this team wins, and if this team loses,” Randall said. “But just from taking a little quick peak at it, we just need the Giants to win out. It would be good for the Giants to stay hot and to keep on winning, so I’m definitely a Giants fan right about now.”

When the Browns tied the Steelers in the opener, then lost 21-18 at New Orleans and 45-42 in overtime at Oakland, Randall was adamant they should’ve been 4-0. The two losses and tie will likely come back to haunt them.

“I don’t think about it now but after the season if we finish 8-7-1 and we don’t make the playoffs, I’ll definitely probably think about it because that would’ve added three or four more victories and we could be a one seed right now,” he said. “But you know if we win out they just better not let us in the playoffs, I’m gonna tell you that. Because the world was shocked when the Cavs came back from 3-1 …”

Of course, he’s referring to the stunning NBA Finals comeback in 2016 that brought Cleveland its first professional championship since 1964. The Browns going from 2-6-1 to the Super Bowl would reach that level.

“I think it’ll be close, if not higher,” Randall said.

He’ll still be able to find a bright side if the Browns fall short of the playoffs.

“Because we were 0-16 last year,” he said. “If we win out and we don’t go, that’s an eight-game improvement. I don’t think we’ve seen an eight-game improvement in a long time, so we’ve got a lot of things to look forward to coming up next year. We’ve got a great, young foundation that is hungry and is going to be willing to know what we’re going to bring next season.

Baker Mayfield said he hadn’t seen the response to his postgame plea for more fan support but didn’t back down.

“I have not looked into it, but I am hoping it had a good response,” he said. “Nothing against the fans — I get it, it is cold — but we are all out there anyway.

“Everybody in the locker room, I am sure if they have seen it or not, I think they would say the same thing, too.”

After the 26-20 win over the Panthers on Sunday, Mayfield said “we would love to have more fan support” and encouraged people to attend the home finale against the Bengals. He was asked about earning back the fans’ trust after years of losing.

“We don’t care about the past. We hit the reset button,” he said. “We are trying to play for now. It is not about what has happened in the past.

“We want that continued support that they have given over the years. There is no doubt about that. They stayed true and loyal. We just want the support like any other team would.”

“I really don’t know if I can see that high up there, but it was loud to me,” he said. “But definitely we would like to have a sellout game on the 23rd against the Bengals.”

Cornerback Terrance Mitchell was selected by his teammates to receive the Ed Block Courage Award, which is based on courage, compassion, commitment and community. Each team picks someone who exemplifies the qualities of Block, the former head athletic trainer of the Baltimore Colts.

Mitchell started the first four games, posting 19 tackles (18 solo), three passes defensed, an interception, two forced fumbles and a fumble recovery. He broke his wrist in Week 4, had surgery and missed eight games before returning against the Panthers. He said the time on the sideline tested his faith.

“That is a lot of love,” Mitchell said of the award. “It makes me really appreciate my teammates for them to even think that way about me. That was a blessing.

“I love my team. I love this organization. It is all good.”

Mitchell, who wore an orange Browns hard hat during the interview, is also active in the community and the team’s commitment to education, youth football and the volunteering movement.

Receiver Rashard Higgins was still kicking himself after dropping a pass in the second quarter, which followed a first-quarter fumble.

“Because I strive on catching the ball. I mean, that’s what I do,” he said. “And I can count on my hands how many times I dropped the ball this season.

“And that was my money. And I left it out there. But I can’t hold onto it. It happens. It happens to the great ones, it happened to me.”

Higgins was sure he would’ve scored on the pass down the seam.

NO PAIN, NO GAIN

Center JC Tretter was feeling “pretty good” heading into the Panthers game. Then his left ankle got rolled into again. The same thing happened against Pittsburgh and Cincinnati, but he called the latest setback the worst one.

“It took awhile in the tent just wrapping it up and getting my bearings back,” he said. “But I’ve kind of gone into every game with the idea that I wasn’t going to miss a play, so you just try to find a way to get through it.”

Tretter suffered a high ankle sprain Oct. 14 against the Chargers and hasn’t missed a snap. He limped off the field Sunday and barely made it into the medical tent. He said the ankle was rewrapped but he didn’t get an injection.

Williams said Ogunjobi was sore after playing with the injured arm but will be fine for the Broncos. He said Ogunjobi “really played solid” against the Panthers.

** Vikings offensive coordinator John DeFilippo was fired Tuesday. He was a potential candidate for the Browns’ coaching job.

** Lorain’s Dave McFarland and Avon Lake’s Matt Kostelnik were finalists for the Browns High School Coach of the Year Award. Kirtland’s Tiger LaVerde was the winner.