Mailbag: Time for Danger Zone? Early losses a good thing? What will they do at backup QB? 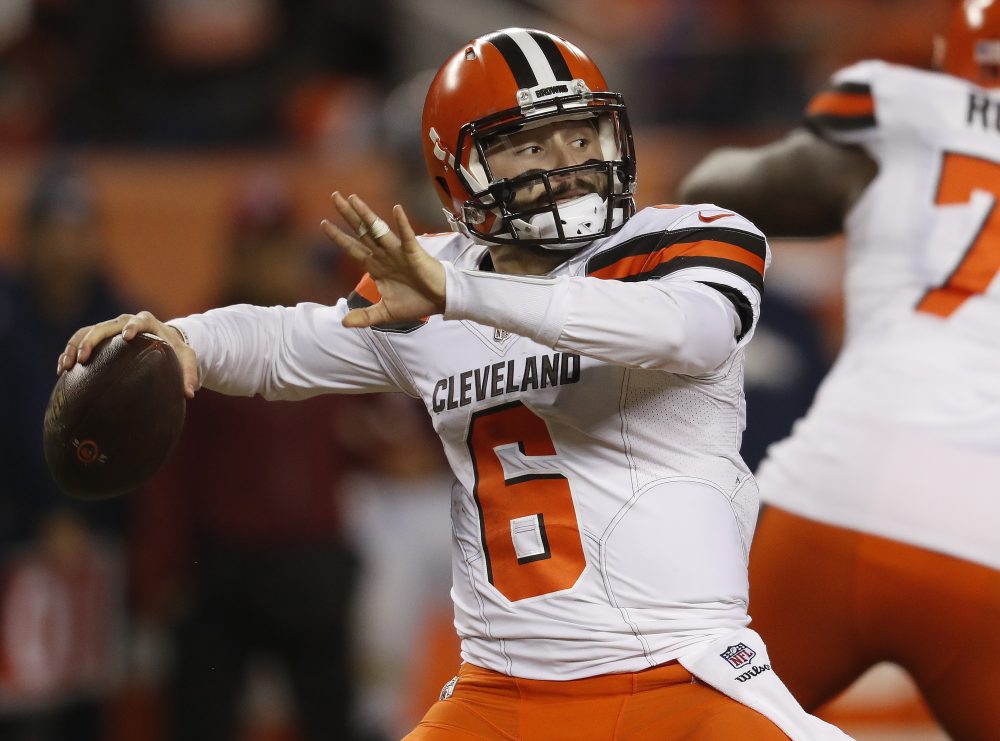 Q: Are the Browns ready to rebrand The Dawg Pound into The Danger Zone? The time feels right. Talk to me, Goose.

A: I hope you’re not just looking for royalties. And quit stealing my “talk to me, Goose” line.

But seriously, this would be the time to make the switch. The last business regime, led by Alec Scheiner, went all-in with the “Dawg Pound” slogan and it hasn’t gained traction. The original Dawg Pound was a 1980s creation that evolved into the one rabid segment of the old stadium. It felt forced to have it cover the entire fan base.

As for “Danger Zone,” it’s certainly hot right now with Baker Mayfield “feeling dangerous” and the leader of the culture change well under way within Berea. Strike while the iron’s hot.

Q:
What happens in #TheLand if the #Browns do what they need to and win out, and the needed teams all lose 2 of 3 games?

A: In a word: pandemonium.

The season is already a huge success at 6-7-1 after going winless in 2017. A trip to the playoffs after starting 2-6-1 and firing coach Hue Jackson would qualify as a miracle.

I love that fans and players can be excited and hopeful when I have almost all of my Christmas shopping done. But it’s still a long shot for everything to fall into place for the Browns to reach the postseason. So if they run the table, get help and get to play in January, Northeast Ohio won’t be able to contain itself.

Q: Could the argument be made that wins earlier in the season would have kept Hue Jackson around, which may have prevented growth and development of the roster and further distorted the win/loss record?

Looking back with regret on the gut-wrenching early season losses to New Orleans, Oakland and Tampa Bay is only natural. The simplistic view is that those defeats will likely keep the Browns out of the playoffs.

But the complete picture includes the firing of Jackson and offensive coordinator Todd Haley. If the Browns had started 4-3-1 instead of 2-5-1, general manager John Dorsey would’ve had a lot harder time convincing owners Dee and Jimmy Haslam to make the midseason moves. It’s highly doubtful the Browns would’ve gone on the same 4-1 run under Jackson, and there’s no argument the Browns needed to make a coaching change moving forward.

So maybe those losses are a good thing, after all.

A: An interesting question. With the franchise guy already on board, GM John Dorsey could go one of two ways. He could find the best possible No. 2 QB in case Mayfield gets injured. You’d hate to lose all the momentum from this season just because Mayfield was out for a while. Nick Foles winning the Super Bowl for the Eagles last year is the perfect example.

Dorsey could also choose to draft a young quarterback with potential who can grow with Mayfield and become a trade asset down the line.

As for Stanton, I’d be surprised if he’s not on the roster next season. He’s been great for Mayfield, who raved about Stanton’s influence again after the win Saturday night in Denver. Stanton can still play, so he could be the No. 2 if Dorsey goes young with the quarterback to replace Tyrod Taylor, who will leave in free agency after the season.

A: File him in the Austin Corbett category.

Thomas was raw coming out of Miami and the coaching staff hasn’t felt comfortable putting him on the field. He’s been a healthy scratch seven times, including the last six games. He was also active thee times but didn’t play and hasn’t registered a statistic in four games.

That’s disappointing for a third-round pick (No. 67 overall), but it’s too early to make any long-term judgments. He has the necessary size (6-foot-5, 278 pounds) and told me recently he’s good enough to contribute right now. It wouldn’t surprise me if he makes a big jump next season.

Mailbag: Who are top coaching candidates? What about Dabo Swinney? Who are X-factors today?
Mailbag: Are Browns happy with Emmanuel Ogbah? Why not stick with Gregg Williams? Best offense in AFC North?