Playoff hopes take beating Sunday, with only slightest chance remaining to sneak in as wild card 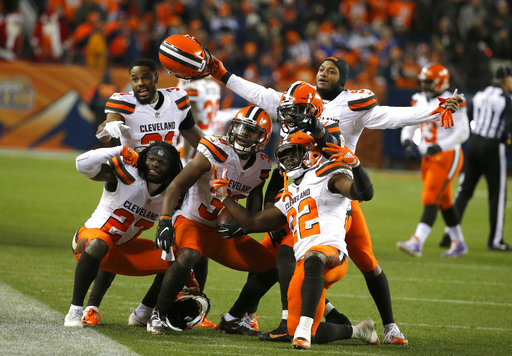 Saturday night was wonderful for the Browns.

The Browns needed help to bolster their slim playoff chances.

They didn’t get it.

The Steelers held off the Patriots, eliminating Cleveland’s chance to win the AFC North for the first time.

And Cleveland’s second road to the postseason was all but closed when the Titans beat the Giants 17-0 and the Colts beat the Cowboys 23-0. The Titans and Colts improved to 8-6 and will meet in the regular-season finale.

The Browns (6-7-1), who beat Denver 17-16 on Saturday, could still claim the second AFC wild card spot, but it would take a miracle.

That may not be a strong enough word.

The only chance is to finish in a three-way tie with the Colts and Titans at 8-7-1. The Browns would advance on the fourth tiebreaker — better record than the Colts vs. common opponents.

Commentary: Even without playoffs, turnaround season can’t be diminished

Several things would need to break Cleveland’s way, including a Week 17 tie between the Colts and Titans, with both teams knowing a tie does them no good.

Of course, the Browns need to beat the Bengals (6-8) next Sunday in Cleveland and the Ravens on Dec. 30 in Baltimore to have any chance, no matter how slim.

Cleveland has won four of five just to stay alive and isn’t likely to be deterred with the dwindling chances. It won the last two games despite the playoff chances being stuck at 1 percent, according to certain analytics sites.

“Every week is playoff week,” strong safety Jabrill Peppers told reporters Saturday night after the win. “You can’t look too far ahead. That’s how you slip up. You look at every game as a playoff game. We can only control what we can control. We know some people have to lose, but we have no control over that. The only thing we can control is going out there and win every game.

“You’ve got Cincy and home, and you’ve got the Ravens on the road — two AFC North games. You know I’m excited, man. Go down to Baltimore on the East Coast, play those guys down there, and then Cincy comes to us first. So those are playoff games right there, and if God blesses us, he blesses us. But if not, this is good steppingstones for next year.”