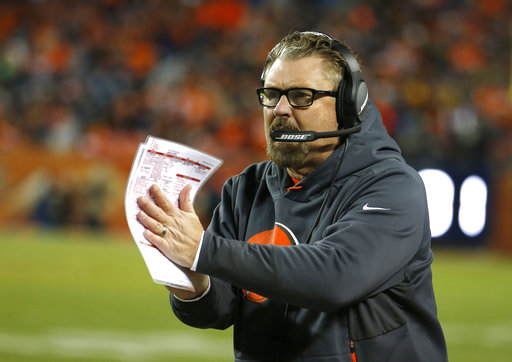 BEREA — The drumbeat is growing for interim coach Gregg Williams to keep the job on a permanent basis.

He’s trying to ignore the noise.

“I don’t think it’s fair to the players or to anybody here,” he said Monday. “The most important thing is making sure these guys understand how we continue to win and how we get ready for the Bengals. Really.

“And when they see the mindset’s that way, that’s the way my mindset has always been. We’ll talk about that at the end.”

Williams is 4-2 since taking over for Hue Jackson on Oct. 29. The Browns (6-7-1) have won four of the last five to stay relevant into late December for the first time in years and generate an excitement that’s captivated fans. With wins vs. the Bengals and at Baltimore to finish the season, they would finish above .500 for the first time since 2007.

General manager John Dorsey, who’s leading the coaching search, said during the bye in November that Williams would be interviewed to keep the job, saying he “deserves” it. His candidacy that seemed like a long shot at the time gains credibility with each win, and safety Jabrill Peppers gave his endorsement Monday.

“I love Coach to death,” he said. “I’d love to see that, but at the end of the day that’s not my call. It’s a business league.

“I’m going to play as hard as I can for him and squeeze out as many wins as we can. That’s our mindset.”

Commentary: Even with playoff chances all but gone, turnaround this season shouldn’t be diminished

Dorsey has kept a tight lid on his list of potential candidates, but Williams will likely have high-level competition. Chiefs assistants Dave Toub and Eric Bieniemy, Oklahoma coach Lincoln Riley and fired Packers coach Mike McCarthy are expected to draw interest from Dorsey.

Williams, 60, is a longtime defensive coordinator and won a Super Bowl in that role with the Saints. He was a head coach once, going 17-31 with the Bills from 2001-03.

He’s got a taste again in the interim role.

Williams already has more wins in six games than Jackson had in 40. That illustrates the unique situation he walked into. He inherited a 2-5-1 mess that included “internal discord” between Jackson and offensive coordinator Todd Haley but also followed one of the worst coaches in NFL history.

Peppers credited Williams with paying greater attention to detail, having the players prepared for game situations by going over them in practice in a competitive format and building a level of trust between players and coaches.

“It would have been easy to crumble and blame everything else that was going on, but we stuck together, fought it out and we’re on the cusp of having our first winning season around here in a long time, so everything falls how it may,” Peppers said.

Receiver Breshad Perriman arrived two weeks before the coaching change and believes Williams has made all the difference.

“I feel like he deserves credit for a lot of stuff that’s going on now, just the fire and the energy that he’s bringing to this team has been incredible,” he said. “I feel like you can’t put a limit for the amount of credit you give him.

“Just the way he carries himself, the way he communicates with us, we know what he’s about and I feel like, for the most part, for us as a team, we’re all falling under his wing.”

Offensive coordinator Freddie Kitchens is also making a case to be retained after taking over the play-calling duties for the first time in his career when Haley was fired along with Jackson. Rookie quarterback Baker Mayfield has been a different player under Kitchens, completing 70.6 percent for 1,594 yards, 13 touchdowns, five interceptions and a 109.3 rating in their six games together.

If the Browns finish 8-7-1 and on a four-game winning streak, keeping the status quo would have a lot of support. Williams, who said the feedback from Dorsey’s been “good,” wasn’t ready to say the organization’s culture has flipped.

“Our guys understand there’s a good, young team in there, and we’ve got to continue to focus on week after week after week and don’t look ahead,” he said. “Do not look ahead. That’s when things start to maybe become more distractions. Take it for what it is.”