Notes: Jabrill Peppers wants winning record and to kick Hue Jackson’s ass again (even though he loves him) 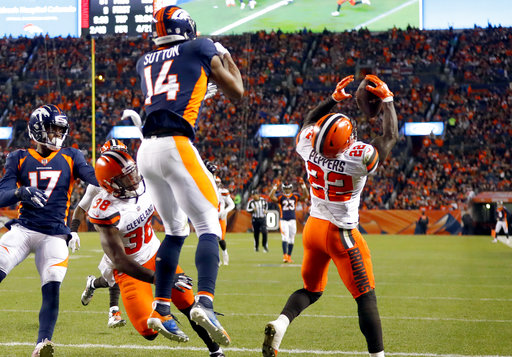 BEREA — The playoffs had been a beacon of hope for the Browns over the past few weeks. Interim coach Gregg Williams mentioned the goal often and the players were excited about the possibility.

Results from around the league Sunday all but eliminated the Browns from playoff contention, so they’ll have to find other sources of inspiration for the final two games.

“Every game’s important,” Williams said Monday. “And we can’t control those other factors, but we can control who we are, how we are going about doing it, so don’t have excuses, control who we are. And we’re treating each and every week as that opportunity.”

Williams said he will address the playoff situation Wednesday in the meeting to start the week but isn’t concerned the players will have a problem keeping up the intensity.


“If I have to worry about that, we have the wrong people,” he said. “And people don’t understand that when you ask about motivation and you ask about intensity, we’re inside the white lines, let’s roll. And if that becomes a factor, the most important thing that I have to do is recommend to people upstairs that guy doesn’t belong.”

All of the following must happen for the Browns to reach the playoffs for the first time since 2002:

** They beat the Bengals and Ravens.

** The Ravens lose to the Chargers on Saturday.

** The Dolphins lose at least once.

** The Colts and Titans lose this weekend, then tie each other in the finale.

Strong safety Jabrill Peppers hadn’t heard the outlandish scenario. He’d at least like to finish at 8-7-1, which would be the team’s first winning record since 2007.

Players are still talking about the visit from NBA legend Kobe Bryant on Friday in Denver. He talked to the team and answered questions.

“That was probably one of the dopest moments since I’ve been in the league,” Peppers said. “The way he can just command a room when he talks. You just have no choice but to listen.”

Peppers said he had a lot of takeaways from the meeting and shared one.

“He always said that he felt it was selfish when guys wouldn’t shoot the open shot of fear of what everyone else would think about them,” he said. “What I took away from that is that you can’t be scared about what everyone else is going to think about you, be you, play the best way you can play and good things are going to happen.”

Williams had fun watching the players’ reaction when Bryant entered the room and how attentive they were.

Former Browns coach Hue Jackson will return to town this weekend as an assistant with the Bengals. During Cleveland’s 35-20 win in Cincinnati last month, free safety Damarious Randall handed him the ball on the sideline after an interception. The next day quarterback Baker Mayfield called him “fake.”

Peppers has no such hostility toward Jackson, who took the job with the Bengals two weeks after being fired by the Browns.

“I love Coach Hue. He’s one of the reasons I’m here,” Peppers said. “I know how it looks, but he’s the ultimate competitor. He just wanted to be a part of the game and when the opportunity arises, he couldn’t turn it down.

“So I have no ill will towards him. I’m thankful for everything he taught me. Thankful that he brought me here, but still looking forward to kicking his a– again.”

Mayfield continued to earn praise for his decisions before the go-ahead 2-yard touchdown pass to Antonio Callaway in the fourth quarter. He audibled from a run to a pass and moved running back Duke Johnson to the left side of the formation.

“Pretty doggone good,” Williams said. “That is outstanding, and it can’t be that simple.”

“I believe he’s one of a kind,” receiver Breshad Perriman said of Mayfield. “Just his experience and for him to keep pushing through whatever comes his way, it’s just crazy. He has a great understanding of the game. We all basically just go as Baker goes.”

Williams doesn’t regret going for it on fourth-and-1 in the final two minutes, even though running back Nick Chubb was stuffed and Denver got a final chance to win the game. Williams does regret calling timeout before the play, which negated an offsides penalty on the Broncos after a hard count by Mayfield.

“The timeout, I wish that I could have had it (back), but there was a little bit of confusion at that point in time on what play we were going to call,” he said. “We were going to go for it no matter what.

“In that situation for a young team is impose your will, have total control of the win and after the first down the game is over.”

Cornerback Denzel Ward remained in concussion protocol more than two weeks after getting injured against the Panthers, but Williams said he’s moving in a “positive fashion.”

** Perriman didn’t know the first-quarter touchdown against Denver was his first in two years, giving him four in a three-year career.

“That and we got us a win, so it definitely makes it an even better blessing,” he said.

He’s scheduled to become a free agent after the season but wants to stay.

“Definitely. No doubt. I love it here,” he said.