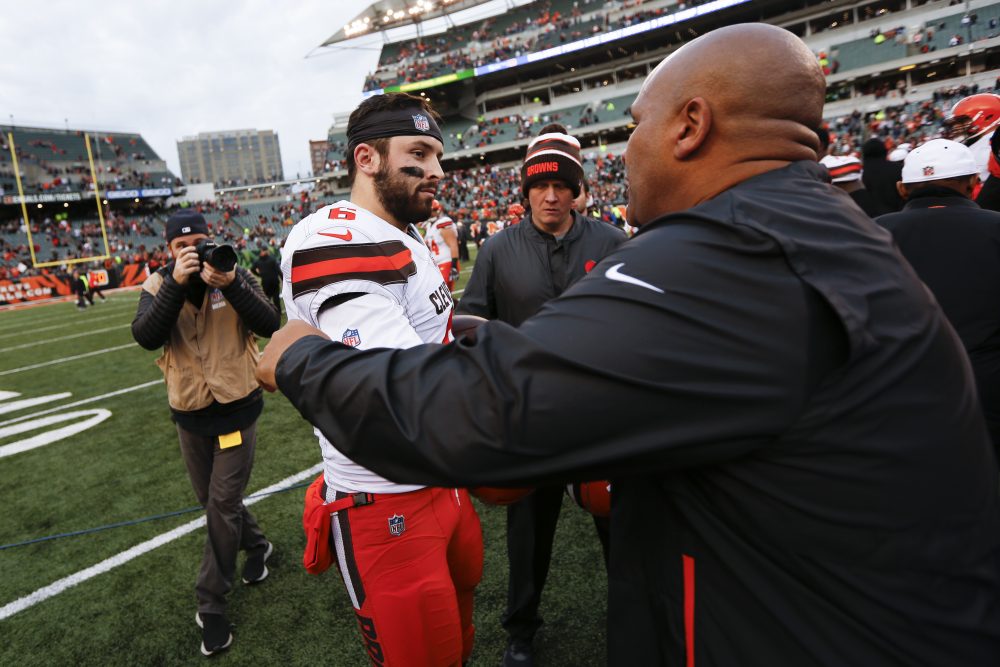 BEREA — Baker Mayfield didn’t hold back when discussing former coach Hue Jackson after the Browns’ 35-20 win in Cincinnati on Nov. 25. He said a pair of frosty, abbreviated handshakes were because he didn’t like the decision to join a division rival 15 days after being fired by the Browns, then called Jackson “fake” in an Instagram comment the following day.

The Browns host Jackson on the Bengals on Sunday, and Mayfield was asked Wednesday if he or Jackson had reached out to the other since.

The non-answer leaves room to speculate there was contact, or attempted contact. Mayfield was clear when asked if his feelings had changed.

Jackson went 3-36-1 with the Browns before being fired Oct. 29. He took a job as special assistant to Bengals coach Marvin Lewis two weeks later.

Mayfield wasn’t the only one who didn’t appreciate Jackson joining the in-state rival. Defensive end Myles Garrett said he didn’t care but expects some teammates to focus on Jackson again this week.

“Since he’s there, that’s still a motivating factor for them to try to get after it a little bit differently,” he said. “But I want to beat them into the ground and I want to win. That’s with every team. It doesn’t matter who they are.”

If Mayfield’s treatment of Jackson motivates the Bengals to play angry, he doesn’t care.

“It is all right,” Mayfield said. “Football is an angry, violent game. If you play anything but p—– off, I do not think that you are doing it right.”

This will be the home finale and Mayfield encouraged fans to pack FirstEnergy Stadium. Jackson was the object of a ton of criticism when he was here and will surely be a target Sunday on the sideline.

“Obviously people are entitled to their own opinion, but we will see,” Mayfield said of the reaction. “That energy the crowd is going to bring, positive or whatever it is, we are going to feel that and it is going to be an energy that is encouraging us to win.”

Left guard Joel Bitonio has no doubt how Jackson will be received in his return.

“I’m sure he’ll get booed a lot, the fans will probably give him a hard time,” he said.

Lewis was in no mood to discuss the Jackson-Mayfield relationship.

“Whatever Baker’s choice of words are is up to him. I can’t control that,” he said.

He didn’t appreciate a follow-up question.

“There is not anything about Hue and Baker in this call,” he said. “We are going to talk about the Browns and the Bengals. Other than that, I guess we are done.”

Bitonio is a step away from being the Pro Bowler he believes he deserves to be.

He was named the first alternate when teams were announced Tuesday night. If Pittsburgh’s David DeCastro, Baltimore’s Marshal Yanda or Indianapolis’ Quenton Nelson can’t play, Bitonio will get the call.

He and wife Courtney are expecting their first child, a girl, on Jan. 10, so the calendar is clear.

“I’m having a baby pretty soon, so I don’t really have plans anyway,” Bitonio said. “Obviously you want to see yourself in the Pro Bowl, but to get recognized by the fans, by the players, by coaches, that means people are at least voting for you.

“And I was second (alternate) last year, I was first this year, so I’m slowly moving up hopefully.”

He said last week his grandma was stuffing the online ballot box.

“She doesn’t think she voted enough because I didn’t get in first ballot, but I told her she’s done plenty,” he said.

He said he’s a “little bit” disappointed but knew he was a long shot. Interim coach Gregg Williams thought he deserved the return trip.

“Yeah, I really did, but it goes to show about when you miss (three) games, that is hard,” he said. “Maybe some of the people that do not get the chance to actually see you play, maybe all that they look at is the statistics or the percentage of plays played. He is a competitive young man, and he has had a very good year.”

Cornerback Denzel Ward, who was picked for the Pro Bowl along with defensive end Myles Garrett, said he felt Schobert and safety Damarious Randall were worthy of the recognition.

Ward, Garrett cornerstones of a defense that aims to “really terrify” QBs

Ward returned to practice Wednesday for the first time since sustaining a concussion Dec. 2 against Houston. He said it was his first.

Ward, who missed two games, was a full participant in practice.

For the first time since Week 4, the Browns will have both starting corners — Ward and Terrance Mitchell — on the field. Mitchell missed eight games with a broken wrist before returning Dec. 9.

Offensive line coach Bob Wylie became a “Hard Knocks” star with his funny commentary and a belly that flexes when he says “set-hut” to his linemen.

The belly came in handy again when the Browns made a Christmas video with Wylie as Santa Claus and the linemen as the reindeer pulling the blocking sled. It’s gotten a lot of positive feedback.

“Anything that Bob has done this year has been a hit,” Bitonio said. “It just shows, honestly, he’s one of the best human beings I’ve been around. He’s a great coach but what he does off the field — he takes care of the people in the building and he’s just a great dude.

“It’s cool we’ve won some games so we’re allowed to do that now. If you do that when you’re 0-14 it’s usually not taken very seriously, but we were just having fun and we just want to wish people happy holidays. It was awesome and if you haven’t noticed, watch Greg Robinson in that video. He wins the award for best reindeer by far.”