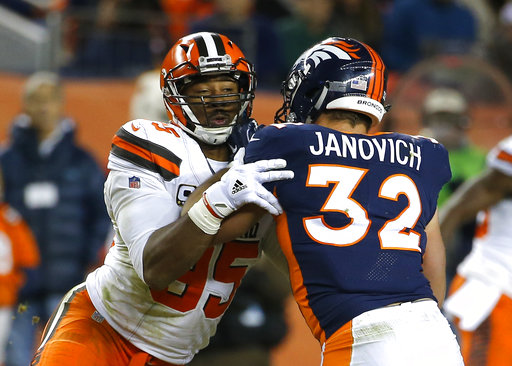 BEREA — The blueprint for building an elite defense starts with pass rusher and cornerback.

The Browns have Pro Bowlers at both spots — and they’re under the age of 23.

“It can only get better with time. The sky is the limit for us on defense,” defensive end Myles Garrett said Wednesday. “I feel like the more time we have to grow and mesh together, we’ll be able to really terrify some quarterbacks.”

Garrett is the ferocious pass rusher. He turns 23 on Dec. 29, and less than a month later he’ll start in the Pro Bowl in Orlando, Fla. The all-star rosters were announced Tuesday.

Rookie Denzel Ward is the shutdown cornerback. He’s 21 years old and has played only 12 games in the NFL but already has the reputation of a standout. He’s the sixth rookie in Browns history to make the Pro Bowl.

“Yeah, it’s a bright future here with the Cleveland Browns,” said Ward, who returned to practice Wednesday after missing two games with a concussion. “It’s not just me and Myles, it’s me, Myles, Jabrill (Peppers), Damarious (Randall), it’s all of us. We all work as a team and without one of those guys we don’t work.”

Ward mentioned the safeties, and Garrett pointed to linemen Larry Ogunjobi and Emmanuel Ogbah as being part of the future. Middle linebacker Joe Schobert was the team’s lone Pro Bowler last year and has backed it up with another strong season.

So the defense is about more than Garrett and Ward, but it starts with them. The treatment from interim coach and defensive coordinator Gregg Williams is a dead giveaway.

“I know he only gets after the guys that he knows can really have a chance to be great,” Garrett said. “He gets after everybody, but it’s different when he really has an eye on you and he’s always had an eye on Denzel. He’s always wanted the best for him, so I can see it from his perspective, that he can be really special.”

Was Williams the same way with Garrett as a rookie?

Special play and Pro Bowl appearances were expected when the Browns drafted Garrett with the No. 1 pick in 2017 and Ward at No. 4 in April. They used their tremendous gifts — burst, power and flexibility for Garrett; speed, athleticism and playmaking for Ward — to quickly transition to among the best in the NFL and help turn the Browns (6-7-1) from laughingstock to legitimacy.

“Today’s NFL is a passing game, so to have a bookend defensive end who can get after the quarterback, get a lot of sacks or make him hurry throws and having a corner who can go and make plays on the balls when they’re in the air, it works hand in hand,” Schobert said. “If corners are shutting down the passing and the quarterback is holding it longer, you know Myles is going to get there. If Myles is pressuring the quarterback and he’s going to be forced to make some hurried throws, you know our secondary is going to be able to take advantage of it. I think you’ve seen that this season.”

Garrett missed five games with injuries as a rookie and finished with seven sacks. He’s stayed healthy this year and has 12.5 sacks, tied for sixth in the NFL, to go with 38 tackles, three forced fumbles and three passes defensed.

He was grateful to make the Pro Bowl but took it in stride and called it Step 1 in his career plan.

“Step 2, All-Pro,” he said, doing the interview shirtless to show off his physique. “Step 3? Defensive Player of the Year. Step 4, win it all.”

“Myles has been very dominant, one of our key players that we need on this team,” Ward said. “We can always count on him to go out there, get a sack and just affect the game on the line of scrimmage.”

Garrett didn’t get much help as a rookie from a secondary that struggled to cover receivers long enough for him to reach the quarterback. General manager John Dorsey addressed that in the offseason by overhauling the secondary, led by the pick of Ward.

“I feel I helped him a little bit, just covering up guys,” Ward said. “And Myles is already a freak of nature, so he’s going to do his job and get to the quarterback whether I was here or not.”

Ward said he was excited to get the call about the Pro Bowl and will take his family.

“It’s definitely a blessing, and appreciate all the voters and everybody that believed in me,” he said. “Just glad I could be a representative here for the Cleveland Browns.”

Ward intercepted Ben Roethlisberger twice in a season-opening tie with Pittsburgh and said confidence is where his game has grown the most throughout the year. He has three interceptions, 48 tackles, 11 passes defensed, two fumble recoveries and a forced fumble.

“First game, yeah, I had two interceptions, but I wasn’t as confident as I am now in my game and just going out there and knowing that I can play with these guys and play with anybody,” he said.

“Obviously, in the beginning of the year, people tried to test him early on,” said quarterback Baker Mayfield, who’s a fourth alternate for the Pro Bowl. “He is a rookie guy, and they are going to try to take advantage, but he made a lot of plays.

“I just think that he has been that guy all year. People just are not testing him as much as they used to. They have seen that he is able to make plays. He is comfortable. He is in the right spot at the right time because he is doing his job at a high level.”