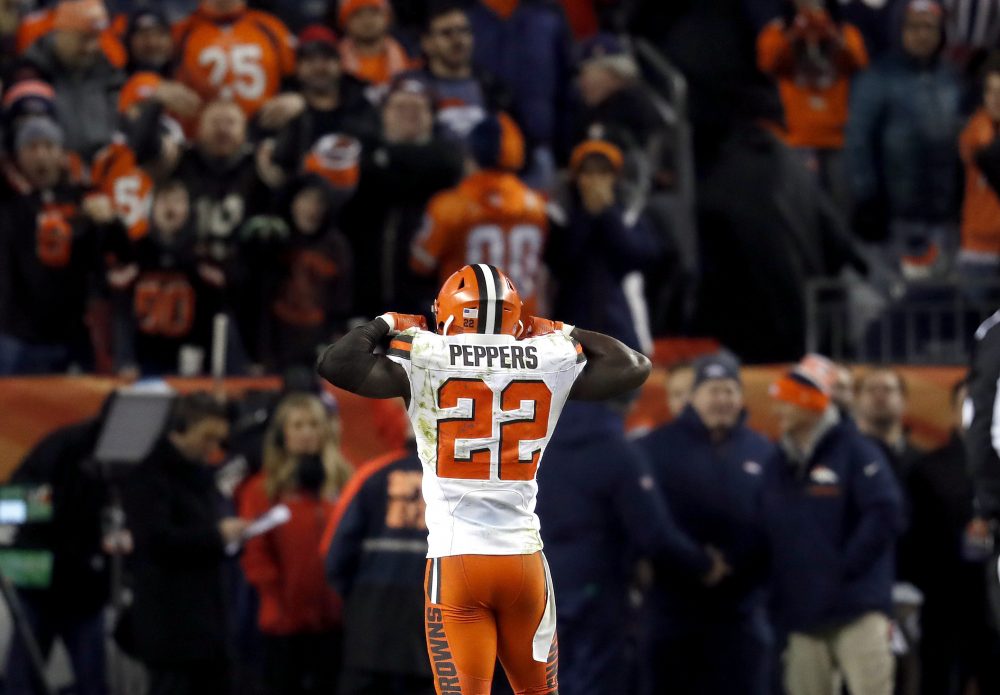 BEREA — Jabrill Peppers heard opponents rattle off insults about the Browns throughout the 0-16 season a year ago.

Pregame comments from the Bengals a month ago in Cincinnati topped them all.

“They said, ‘How you all talking, you play for the Browns?’” Peppers said after Cleveland’s 35-20 win.

“That was probably the most disrespectful thing somebody said to us,” the strong safety said Friday. “That’s why I think we’re going to come out here with the same type of tenacity.


“Because stuff like that, that sticks with you. Like these guys really, really don’t respect us as an organization and as players. So that makes you want to go out there with that extra oomph.”

The Browns (6-7-1) have the chance to sweep the Bengals (6-8) for the first time since 2002 and have been subdued in the trash-talk department.

“Because they understand about being focused and getting ready for this game,” interim coach Gregg Williams said.

The Browns were ready before the November game, but free safety Damarious Randall expressed it in a much different way. The Browns were 3-6-1 and still searching for their swagger. Randall provided it by saying the Bengals would get their “a– beat” if receiver A.J. Green didn’t play.

The comment had the Bengals yapping on the field before the game, causing a dust-up with Randall and Peppers. The Bengals hadn’t seen this version of the Browns. The one that’s won four of five to give itself a chance at the first winning record since 2007.

“Last year we heard it all. They wouldn’t stop talking,” Peppers said. “But this year, when we talk, nobody wants to talk to us. Nobody wants to now that we kinda got this thing rolling. It’s kinda dope to see.”

Peppers didn’t practice Thursday with a stiff neck but was back Friday and said he’ll play Sunday.

“Come on now, we’ve got something to accomplish,” he said.

He’s not about to miss this battle, especially coming off his best game since being drafted with the No. 25 pick in 2017. He intercepted a pass in the end zone in the first half and clinched the 17-16 win over the Broncos with his first career sack.

“Pep is smart, he’s athletic, he studies,” cornerback Denzel Ward said. “He’s a beast in practice so it was definitely well-deserved.”

Peppers’ range was on full display on the interception, as he went from deep center field to the right sideline. His intelligence showed on the sack as he recognized Denver’s formation and came through clean.

“Jabrill Peppers made a tremendous adjustment to the play call because of what he knew they were going to do,” Williams said.

“Just listening to the offense playing the game and then just finding little nuances that help you win,” Peppers said.

He added six solo tackles to the splash plays but wasn’t satisfied.

“I left a lot of plays out there,” he said. “Everybody thinks it’s good but I feel like that’s stuff I should’ve been doing. I still left a sack out there, still let a guy catch a pass on me, could’ve made a play on the ball later on in the game so it’s all about putting it all together and not missing any of the plays that come your way.

“I missed two but made the rest last week. This week try and make them all, make all my tackles and follow that game with another good one.”

Peppers has started all 14 games, totaling 66 tackles, the sack, the pick, five passes defensed and two fumble recoveries. The numbers aren’t what he’d like, but he’s seen a huge improvement after the struggles of his rookie year when he was forced to play out of position at free safety, 25 yards off the line.

“I can still be playing a lot better but, in terms of compared to last year, it’s night and day,” he said. “I learned a lot last year, my first year playing free safety, mistakes are going to happen, it’s just those mistakes are magnified when you’re back there. But I took it on the chin and I applied my lessons to this year and it definitely helped.”

“He comes to work every day with a demeanor and an attitude to get better,” Williams said. “He never takes a day off, and that is fun to be around those kinds of people.”

The Browns are 2-1-1 in the AFC North and can guarantee their first winning record since the division was formed in 2002 with a win over the Bengals. Peppers was asked if they’ve established themselves among their rivals.

“It’s just about respect,” he said. “We don’t want to say we’re a force or anything like that, but you’re going to respect us and if you don’t you still gotta put the ball down and play us.

“And if you don’t respect us and we beat you, then don’t say anything for how we talk. I’m not going to go out on a limb and say we’re this, we’re that but you’re gonna respect us just like we respect everybody. So that’s how I feel.”