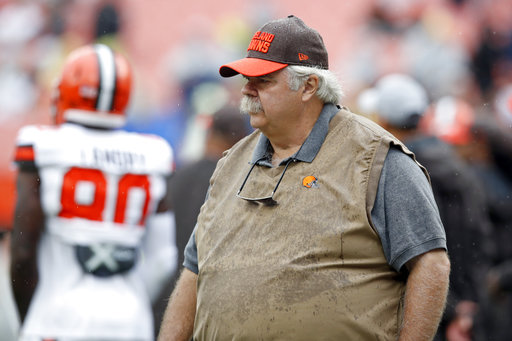 BEREA — The offensive linemen postponed their gift exchange Friday because position coach Bob Wylie was in the hospital after his ankle broke Thursday during practice.

The delay gives the players time to get another present.

“We’ll get the game ball for him and bring it to him,” left tackle Greg Robinson said. “Yeah, that will be amazing.”

The Browns host the Bengals on Sunday and will be looking for a season sweep. A victory means game balls, and the linemen want to recognize Wylie, who had surgery Thursday after the non-contact injury and is expected to miss the game.

“He’s such a great guy. He makes you want to come to work,” Robinson said.

Wylie started in the NFL in 1990 and has a huge personality. In his second year in Cleveland, he’s become a favorite of the players.

“If you can get a joke in the day, it breaks up,” right guard Kevin Zeitler said. “It’s a very tense job, a tense position. It brings some humanity back to it.”

Wylie, 67, is a pilot, magician, musician and drives a white Maserati. He’s also an offensive line expert. The Browns are profootballfocus.com’s second-ranked line behind the Steelers.

“Big-time smart guy,” Zeitler said. “He knows the position inside and out. He’s done it for so long, and he can tell you right away what you need to do, what you need to fix and it’s stuff like that.”

The linemen called Wylie in the hospital Friday morning and said he was in good spirits but disappointed he wasn’t with the team. They were still shaken by the sight of the displaced ankle. Left guard Joel Bitonio heard Wylie scream and then Zeitler scream.

“I’ve never seen a gruesome injury happen like that, ever. So it scared me,” right tackle Chris Hubbard said. “I can’t get the image out of my head. Knowing his spirit, I know he’s a great spirit guy and he’s going to bounce back real quick.”

“He’s seriously one of the best humans that I know,” Bitonio said. “He gives back all the time.”

Wylie became a fan favorite on “Hard Knocks” for his running commentary in meetings and during practice, and his belly flinching when he yells “set-hut” in drills is all over the internet. He donned a Santa suit recently for the team’s holiday video.

“I’m glad we got the video recorded before it happened,” Bitonio said.

For the first time in recent memory every Browns player practiced.

Peppers, Ogunjobi and Tretter are expected to play.

Britton Colquitt will set the franchise record with another punt landed inside the 20-yard line. He’s at 32, tied for second in the league (seven behind Washington’s Tress Way) and tied for the best season in Browns history with Brad Maynard in 2011 and Bryan Wagner in 1989.

“Anytime you can break a record you take a lot of pride in that and I’m humbled that I’m even in a position to do that,” Colquitt said.

He was voted a second alternate to the Pro Bowl this week. He’s never been to the all-star game.

“It’s a great honor to be voted upon by the fans and then getting a nod from other players that you know and play against and coaches,” he said.

NFL head of officiating Al Riveron said on his weekly video that Broncos running back Devontae Booker should’ve been penalized 15 yards for lowering his head to initiate contact in Cleveland’s 17-16 win Saturday night. A penalty wasn’t called on his 15-yard catch-and-run on fourth-and-2 in Denver’s final drive.

** Browns linebacker Jamie Collins was flagged for the same infraction in the first quarter, and Riveron said it was the right call. Fines from the game will be revealed Saturday afternoon.

** The Ravens announced coach John Harbaugh will return in 2019 and the team’s working on a contract extension. He could’ve been a candidate for the Browns job if he had become available.