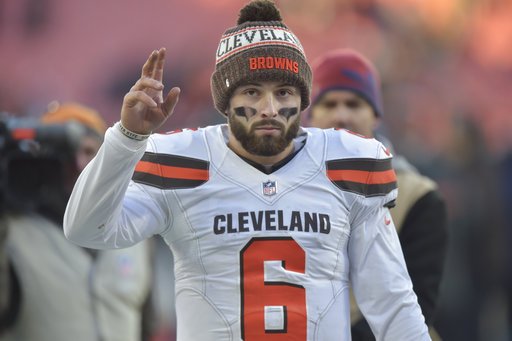 Before the draft then-coach Hue Jackson called Mayfield a pied piper for the way he’d yell “hee-hee” at Oklahoma and everyone would follow.

He’s using actual words with the Browns but having the same effect. The home finale Sunday against the Bengals could serve as a pair of prime examples.

Mayfield’s latest attempt to cultivate the correct culture in Cleveland came Wednesday when asked about a possible letdown with any realistic chance at reaching the playoffs gone. A win by Tennessee on Saturday officially eliminated the Browns.

“We want to win our last two games. If the guys on this team don’t want to do that, then you can get out,” Mayfield said. “That is quite frankly how I feel.”

Whether his teammates play with the commitment and urgency he demanded will be known Sunday afternoon. But the message appeared to be received loud and clear, as he continues to set the tone in the locker room.

“I love it. I love it. I will back that up,” interim coach Gregg Williams said. “You do not want to be around guys that want to be in a club or want to be a part of something unless it is winning. That is why he has the locker room. In practice, there could be a bad play or two and then all of a sudden, bam, he circles the wagons. That is what you need inside of the white lines.”

Mayfield’s impact as a vocal leader isn’t limited to his teammates. A packed and jumping FirstEnergy Stadium will drive home the point.

Less than two weeks after calling out fans for leaving too many seats empty during the win over the Panthers, Mayfield announced this week in a video that Sunday was a sellout. He thanked fans for listening, then urged them to be loud.

The two straight wins, four out of five and the holidays contributed to the bustling ticket sales, but Mayfield’s influence can’t be ignored.

“I’m excited to have a meaningful December game for the fans before Christmas,” left guard Joel Bitonio said. “It should be fun, man. Baker has that power. Baker’s a popular dude, and it’s cool to see what he can do with the fans and that interaction.”

“Baker, he’s just a guy who everyone just gravitates to and when you’re playing well, you can say things like that,” strong safety Jabrill Peppers said. “They believe in him, that’s why they’re coming out, so we’ll go out there and give the fans what they want to see.”

Mayfield notices the fans feeding off his brash, charismatic personality … and wearing the “feeling dangerous” T-shirts based on his famous slogan.

The Browns (6-7-1) believe they have plenty left to play for despite being on the outside of the playoffs for the 16th straight year, the longest drought in the league.

They can sweep the Bengals for the first time since 2002 and get the second win over Jackson in less than a month, after he quickly took a job on the Bengals staff after being fired Oct. 29.

“He’s on the other side now, and that’s how I look at it,” said receiver Jarvis Landry, adding some Browns are still motivated by facing Jackson. “Either you’re with us or against us, and I’ll leave it at that.”

Peppers motivated by “most disrespectful” trash talk from Bengals

“You can definitely feel the emotions and the swagger in the locker room are just totally different than it has been,” middle linebacker Joe Schobert said. “It is just exciting. It is going to be awesome. I think we are building something really special.”

The Browns have proved a lot in this turnaround season, especially on the recent roll led by Williams and Mayfield. The remarkable improvement from 1-15 and 0-16 seasons means the focus next year will be reaching the playoffs. The final two games this year are about stringing wins and handling success and expectations.

The lessons will be valuable next year and beyond if they’re going to become the consistent contender that seems possible with general manager John Dorsey, Mayfield and a coach to be named later.

The Browns are nine-point favorites vs. the Bengals following their 35-20 victory in Cincinnati last month. Cleveland hasn’t been favored by this much since the 2007 finale when it was 11½-point favorites over the 49ers, according to OddsShark.com.

“We’ve been the underdog for the last three or four years,” Bitonio said.

Mayfield struggled last week against Denver, throwing an interception, losing a fumble and completing only 18 of 31 passes (58 percent). But he went 4-for-4 on the winning touchdown drive in the fourth quarter.

The struggles appear to be a blip, as Mayfield has put together one of the best rookie seasons in NFL history.

Mayfield has been a different player since Williams and offensive coordinator Freddie Kitchens took over for Jackson and coordinator Todd Haley. Since Week 9, Mayfield’s third in the NFL with a 70.7 completion percentage, second with 8.66 yards per attempt, seventh with 13 touchdowns and fourth with a 109.3 rating.

He said he didn’t know about the chance to set the rookie touchdown record.

This week he’s all about beating the Bengals in a stadium filled with screaming fans.