Browns 26, Bengals 18: The breakdown — thumbs up, thumbs down, the matchups 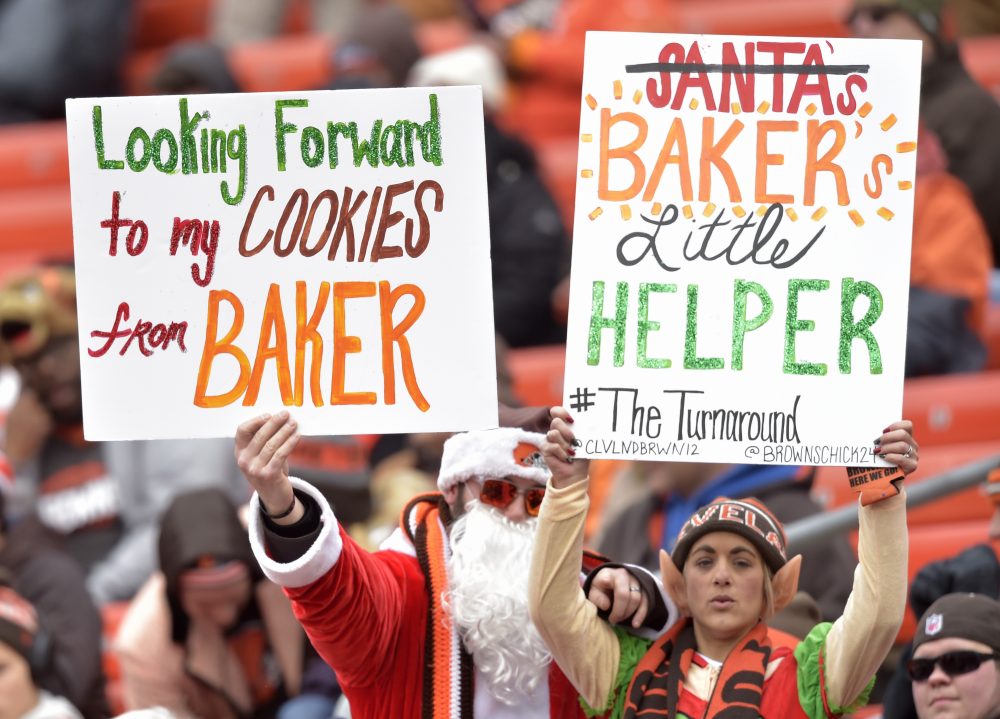 The loyalty has finally started to pay off. After years of suffering through season after season without hope — and one without a win — the fans can get excited about the results and team on the field, and not just the draft. Santa will surely be bringing a bundle of Browns tickets and jerseys.

Quarterback Baker Mayfield challenged the fans to show up — which takes guts for a rookie new to town — and they responded with a sellout and their patented passion throughout the home finale. The fans have been among the best in the league while the team’s been among the worst, and they deserve any recognition they receive.

“It was outstanding, and it brought back memories to me,” interim coach Gregg Williams said of the atmosphere. “I am serious, I am thinking before the ballgame this is how it was when I used to come up here in the late ’80s and early ’90s. It is really cool and it was evident. It was great to see the fans have a great Christmas. We talked about giving them a gift with something like this, show our appreciation and play the way the Cleveland Browns are supposed to be playing.”

“The fans were absolutely crazy today,” receiver Breshad Perriman said. “It was so loud and crazy. It was a great experience.”

It’s not really his fault. Being a backup quarterback forced to start is hard enough. Doing it without the team’s two best receivers (A.J. Green and Tyler Boyd) makes the mission nearly impossible. But Driskel did little to help matters.

In his fourth start since replacing Andy Dalton, who’s on injured reserve with an injured thumb, Driskel went 13-for-19 for 133 yards, two touchdowns, three sacks and a 123.4 rating. The numbers couldn’t be more misleading. At halftime he was 2-for-6 for 3 yards and a 42.4 rating. The final stats were padded by two late touchdowns after the Browns got sloppy. He was never a threat and had multiple interceptions dropped.

“It’s tough. It just comes down to execution,” he said of the struggles. “Whether it’s me getting under the right protection, throwing accurate balls, or just being able to hit them whenever they’re bringing one more guy than we can protect. There’s a lot of space out there, and we weren’t able to capitalize off of what they were doing.”

Mayfield has competition for who throws the best deep ball on the team — and it comes from an unlikely source.

After a slow start and scoreless first quarter, the Browns had taken a 7-0 lead. Looking to build on the momentum and bury the Bengals, offensive coordinator Freddie Kitchens dipped into his bag of tricks to start the next possession. Mayfield faked a handoff to Perriman then gave the ball to receiver Antonio Callaway on an end-around. Callaway pitched to receiver Jarvis Landry, who pulled up, planted and fired deep to Perriman for a 63-yard completion down the right sideline. The left-handed pass traveled more than 50 yards in the air.

“He better stop doing that or I am going to lose my spot,” Mayfield said. “Geez, that was a good throw, a really good throw.”

Mayfield threw a 1-yard touchdown pass two plays later to tight end Darren Fells, and the Browns were off and running.

“It feels good,” Landry said. “I’m going to get a little ice on my shoulder right now just in case I’ve got to do it again.”

The play was designed to go to running back Duke Johnson but the safety came down, creating an opening for Perriman.

“I stepped back, I saw him and I just threw it,” Landry said.

Perriman couldn’t get over the quality of the pass.

“I think I was more pumped just for him throwing a ball so perfect,” he said. “It was crazy, it was just a crazy experience. For him to put it on the money like that, that junk was crazy.”

Consecutive completions by Baker Mayfield at one point during the win, tied for the third-longest stretch in team history

“Winning is hard so you need to be able to enjoy it. That is what you see touchdowns like that — the Chief Slam, Hollywood (Rashard Higgins) doing his walk on the red carpet and just different stuff like that. It makes it fun and enjoyable to be able to celebrate with your teammates. You go through so much, you better enjoy it.” — Mayfield on the team’s touchdown celebrations

The shutout was possible into the fourth quarter, then things got sloppy and Cleveland allowed Cincinnati to pull within a score. Tackle Larry Ogunjobi and linebackers Joe Schobert and Genard Avery had sacks.

Not a good day for coordinator Amos Jones’ bunch. Britton Colquitt had his third punt blocked of the season, setting up a Bengals touchdown, and Greg Joseph missed an extra point off the right upright.

Randy Bullock made a 51-yard field goal to start the Cincinnati rally.

Gregg Williams and Freddie Ktichens continue to impress. Williams has galvanized the team and gone 5-2 since taking over. Kitchens again showed creativity with a successful trick play and a variety of personnel packages and play calls.

Marvin Lewis went 0-for-2 against the Browns with Hue Jackson on the sideline and could be looking for a job in a week.