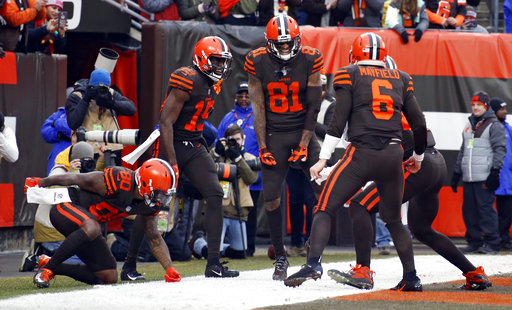 CLEVELAND — The “Ba-ker, Ba-ker” chants by the fans started in earnest after his 10-yard scramble for a first down and continued throughout the rest of the fourth quarter.

They may not stop for the next decade.

“It is definitely a lot of fun. I do not think that there is any other way to describe it,” rookie quarterback Baker Mayfield said Sunday. “I expect that relationship to continue to grow. I relate to Cleveland. The work ethic, the stuff that you have to earn it around here, that is what the Browns are all about.

“It is going to be a good relationship for a long time.”

Mayfield had chastised the fans two weeks earlier for not coming out in full force. The fan base that had stuck by the team through years of losing responded by selling out the home finale and bringing their voices.

Mayfield repaid the support with three touchdown passes, numerous highlights and another victory, 26-18 over the Bengals at FirstEnergy Stadium.

The Browns improved to 7-7-1, and with a win next week in Baltimore could finish above .500 for the first time since 2007. They’ve won three straight and five of six to improve to 5-2 under interim coach Gregg Williams, whose case to keep the job gets stronger by the day.

The hot streak, Mayfield’s scolding and the holiday season combined to create a festive atmosphere. A late Bengals rally that turned a rout tense for a couple of minutes couldn’t stifle the enthusiasm. And when Mayfield wasn’t spreading the ball among his playmakers — he went 27-for-37 for 284 yards, three touchdowns, no sacks and a 121.9 rating — he was pumping up the crowd.

The fans, burned before by so many overhyped quarterbacks and dismal teams, played hard to get for a while. They’re all-in now.

“His energy that he brings to the field, to the team, and how he gets the crowd involved is amazing,” said defensive tackle Larry Ogunjobi, who had a sack and tackle for loss. “To me, he is like a match right now. Just to see how the crowd reacts to him and how he electrifies the field, it’s cool.”

They swept the Bengals (6-9) for the first time since 2002 and won’t finish in the AFC North basement after seven straight years there. They’re 3-1-1 in the division, assuring their first winning record since it was formed in 2002.

The seven-game improvement in the win column over last season’s 0-16 is the largest in team history, surpassing the jump from 3-11 to 9-5 in 1976 and from 4-12 to 10-6 in 2007. The monumental leap has everyone excited for next season, but the run that started with the midseason firing of coach Hue Jackson and offensive coordinator Todd Haley wasn’t able to get the Browns to the playoffs for the first time since 2002, as they were officially eliminated Saturday night.

“It has been a good run,” Mayfield said. “Obviously we would love to be in the playoffs, but you know that you have to go through some tough times to see the brighter end of it. Although it hurt us in the long run, we are going to use this momentum.

Receiver Breshad Perriman, who caught a 63-yard pass from receiver Jarvis Landry, said missing the postseason hurts but is out of the Browns’ control.

“Yeah, it sucks,” Perriman said. “We feel like we definitely should be in, but you know, it is what it is, we’ve just gotta focus on this week coming up and take care of Baltimore.”

The return of Jackson as a Bengals assistant had been an afterthought until the final two minutes. Up eight and facing second-and-4 from the Cleveland 31-yard line with 2:01 left, Mayfield threw a short pass to tight end David Njoku in coverage. Njoku caught it, turned upfield and raced 66 yards to the 3-yard line to seal the victory.

As Mayfield made his way down the field to join his teammates, he stared at Jackson on the Bengals sideline. Mayfield shuffled sideways while keeping his eyes on Jackson, then turned back toward him after looking down the field and stayed locked in as he backpedaled.

“No idea what you are talking about,” Mayfield said with a straight face but a glint in his eye.

Mayfield was told the video of the stare-down had become a thing on social media.

Jackson, who went 3-36-1 with the Browns, shared hugs and handshakes with his former players and assistants before and after the game but was much more subdued than in the meeting in Cincinnati last month. He didn’t interact with Mayfield after Mayfield wanted no part of him in Cincinnati and called him “fake” after Cleveland’s 35-20 win.

Mayfield has thrown 24 touchdowns, trailing the rookie record of 26 set by Indianapolis’ Peyton Manning in 1998 and tied by Seattle’s Russell Wilson in 2012. He’s thrown a touchdown in all 12 starts, third in NFL history for the longest stretch to start a career.

He’s completed 64.6 percent, second in team history behind Hall of Famer Otto Graham’s 64.7 percent in 1953. He’s thrown for 3,349 yards and needs 37 to pass Brandon Weeden for the most by a rookie in franchise history.

“He just keeps showing me week in and week out that he’s a baller,” said Perriman, who had two catches for 76 yards and has averaged 37.6 yards a catch over the last three games. “That’s what we all know, that’s what we all believe. Stand firm on that.”

The love for Mayfield is shared by fans and teammates. On another fourth-quarter scramble he reached out the ball for a first down along the sideline and was shoved by 280-pound defensive end Carlos Dunlap, who landed on him. Landry and receiver Rashard Higgins (six catches, 60 yards) quickly came to his defense, shoving Dunlap.

“I’ve got my boy regardless of anything,” Higgins said. “I’m not going to shy away from any defender. I only fear God. That is how it’s going to be.”

“That shows how close we are,” said Mayfield, who didn’t think the hurt was dirty. “Obviously it is a great feeling to have knowing that people have your back. They have that feeling from me, too. I have their back. That is a real team right there.”

Freddie Kitchens says “Cleveland and I get along well,” his goal has always been to be a head coach
Gregg Williams focused on Ravens, not lack of job security, says will treat finale like “our playoff game”