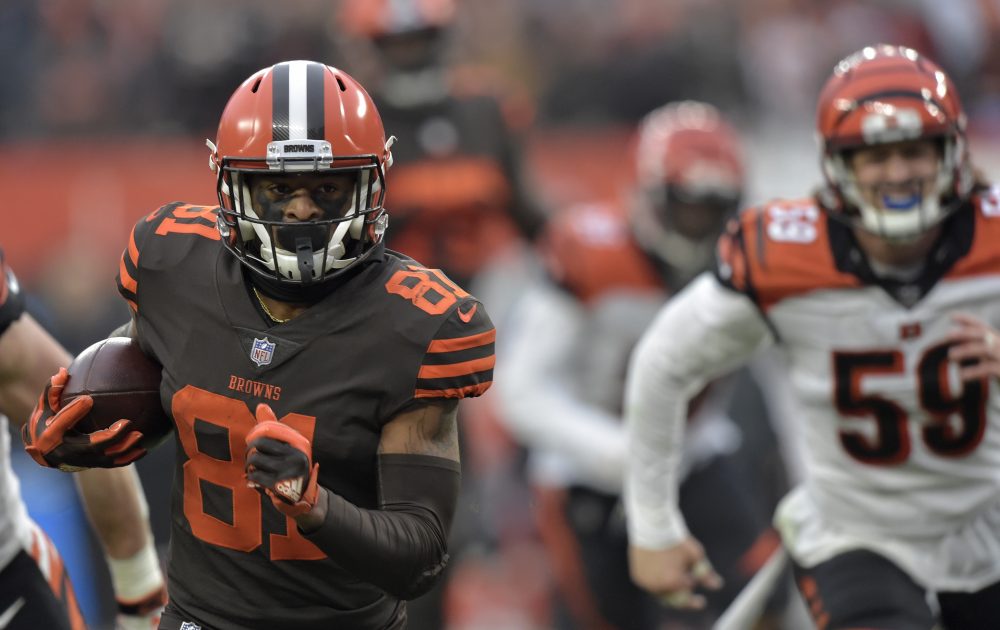 CLEVELAND — The offensive line blocked for a 100-yard rusher in Nick Chubb and kept Baker Mayfield from being sacked for the fourth time in the last six games.

Center JC Tretter was planning to drive left guard Joel Bitonio, right guard Kevin Zeitler and backup Austin Corbett to the hospital to give line coach Bob Wylie the game ball from the 26-18 win over the Bengals on Sunday. He broke an ankle Thursday during practice and had surgery.

“Bob means a lot to all of us,” Tretter said. “The O-line room is always a really tight-knit group both coaches and players. So when you lose one of your brothers, it’s tough.

Interim coach Gregg Williams announced in the postgame locker room that Wylie would get the game ball and handed it to Bitonio.

“We said last night we were trying to win this one for him, get a game ball for him,” Bitonio said. “We have not talked to him since Friday morning, but from our reports he’s doing well.”

Wylie is a lovable, interesting guy who became a fan favorite for his commentary during “Hard Knocks.” He’s also done a good job with the line, as it’s allowed a league-low five sacks since Week 9.

“They played great. It is not always pretty, but they played more than good enough to win,” Mayfield said, adding coordinator Freddie Kitchens told him Wylie had tried to get out of the hospital Friday. “He was a little ambitious on that one. That just shows that he wanted to be out there.

“Our guys did a great job of fighting for him and playing for him. They ran the ball well today and protected well in the pass game. Kudos to them.”

The Browns (7-7-1) can play spoiler in the regular-season finale Sunday in Baltimore.

“That is another thing of motivation we want to use, but at the same time, if we do not want to win, guys can get out of the locker room,” Mayfield said. “We have a mentality that needs to be kept and that standard is there.”

The game in Baltimore has been pushed back from 1 p.m. to 4:25 p.m. because of the playoff ramifications. CBS will broadcast it.

Receiver Rashard Higgins had 10 catches over the previous five games, as he lost playing time to Breshad Perriman. He responded against the Bengals, catching a team-high-tying six passes for a team-high 60 yards and a touchdown.

The score came on third-and-4 from the Cincinnati 17-yard line with 4:59 left in the third quarter. Higgins caught a slant from the left, kept running across the field and dived for the pylon.

“Listen here, man, it’s hard to get in that end zone,” he said. “I’ll be damned if I let anything stop me from getting in that end zone when I got one defender to beat and it’s just that wide open.

“It was calling my name. I was feeling it the whole game and it happened.”

He celebrated with teammates by creating a red carpet for “Hollywood,” his nickname.

“That’s all me. I do it every time I hop in the end zone,” he said. “That’s my entourage, they got the cameras ready. It’s a photo shoot every time you get on the red carpet.”

BACK IN BUSINESS II

Ogunjobi had a sack and a tackle for loss among his four tackles, giving him 5.5 sacks on the season, second on the team behind Myles Garrett’s 12.5. Garrett came close multiple times Sunday but didn’t get a sack.

Avery had a sack, a tackle for loss, a pass defensed and four tackles. He has 4.5 sacks.

“You can go ahead and print this because I love the defensive room — about time,” Williams said. “That has been in them. They do that, and it is good to see all of a sudden, boom, there is some significant plays.

“The plan was really good and those guys executed well. Those are significant big plays right there that puts the play caller on the other side in a negative situation. It was good to see those guys take advantage of that.”

Rookie cornerback Denzel Ward, the No. 4 pick, suffered his second concussion in three weeks in the fourth quarter. He came up to hit tight end C.J. Uzomah along the sideline with his shoulder, they collided and he left the game.

Ward returned this week after missing two games with what he said was the first concussion of his life. He was voted to the Pro Bowl on Tuesday.

He will likely miss the finale Sunday in Baltimore, and his status for the Pro Bowl on Jan. 27 could be in doubt.

** Bengals linebacker Vontaze Burfict also left with a concussion. He, too, has missed the last couple of games.

The NFL handed out fines after last week’s game in Denver. Linebacker Jamie Collins was fined $26,739 for unnecessary roughness after lowering his helmet on a tackle, receiver Antonio Callaway $10,026 for unsportsmanlike conduct after taunting and receiver Breshad Perriman 10,026 for unsportsmanlike conduct after a tussle with Broncos cornerback Jamar Taylor, who was ejected and fined $10,026 for unnecessary roughness.

** Linebacker Tanner Vallejo (hamstring) was inactive. He practiced all week but was added to the injury report as questionable Friday after practice. Ray-Ray Armstrong took his place in the base defense.