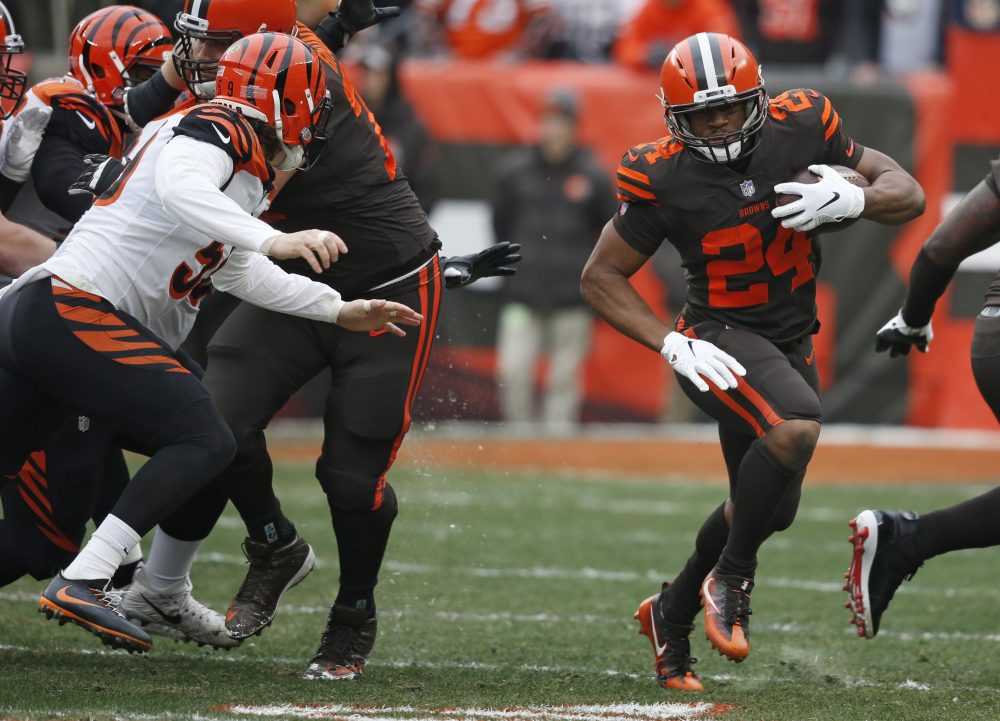 He waited for playing time without complaining. He waits for the hole to open without rushing. He even waits for the long gainer that everyone on the sideline knows is coming at any moment.

Through six weeks of his career, Chubb had 16 carries. Nine games later, he stands alone atop the franchise’s rookie rushing records.

The late start didn’t stop him.

Chubb rushed 19 times for 112 yards Sunday in a 26-18 win over the Bengals at FirstEnergy Stadium. He passed William Green, Jim Brown and Trent Richardson, and his 972 yards are the most for a Browns rookie. The four 100-yard games are also tops.

“Someone came and told me, but it was not really on my mind,” Chubb said. “It comes with having great play from everyone on the field. Guys start breaking records and doing great things as a team. It is a team effort, and we do a great job of blocking up front and opening up holes for me to achieve these goals.”

He tried to downplay the accomplishment, but it meant something to pass Brown, who had 942 yards in a 12-game season in 1957.

Chubb, the No. 35 pick out of Georgia, opened the year as the backup to Carlos Hyde and showed flashes of brilliance in extremely limited action. General manager John Dorsey traded Hyde two days before a game against Tampa Bay on Oct. 21 to clear the way for Chubb and force then-coordinator Todd Haley’s hand.

Chubb has responded with 799 rushing yards and six touchdowns since, giving him 972, a 5.3 average and eight touchdowns for the season. He needs 28 in the finale Sunday in Baltimore to hit 1,000, a goal he sets every season.

“Chubb’s been doing a helluva job for us, and we’re going to just keep it going,” center JC Tretter said. “We’re going to get him to 1,000 and just keep everything rolling.”

“We believe it is just a matter of when he is getting ready to pop one,” interim coach Gregg Williams said. “When you have that style or that ability, you can’t get frustrated. It is going to come next. Don’t look back. Look forward.

Chubb says the offense doesn’t get discouraged, believing the big play is right around the corner.

“I think we all feel it,” he said. “We know it’s going to come sooner or later and those guys do a great job of opening up holes. It starts with them and I take what they give me.”

Quarterback Baker Mayfield and Chubb are roommates on the road and in the hotel before home games. Mayfield said he puts up with the snoring because Chubb takes the pressure off him.

“He chips away,” Mayfield said. “Some of those 4- or 5-yard runs are very close to being long ones like that. You are just kind of waiting for it to happen, and today was one of those days where it happened frequently.”

“Not only is he powerful and not only does he have good vision but just look at the instincts of protecting the ball,” Williams said. “That is excellent.”

There’s a lot to like about Chubb, whom left guard Joel Bitonio called a “great person.” Fellow running back Duke Johnson nicknamed the rookie “Old School” for his throwback mentality.

“Yeah, have you seen his swag? He has the swag of me out there,” the understated Bitonio said. “He just wears gloves and nothing else. Head down, just works his tail off constantly.”