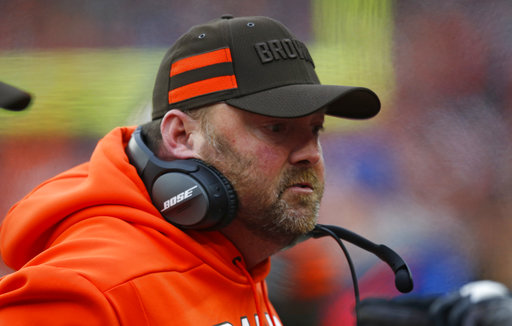 In the 26-18 win over the Bengals on Sunday, he again showed the creativity and efficiency that will likely make him a leaguewide candidate for coordinator jobs and possibly head coaching jobs if he’s not retained by the Browns in either role.

The tricks up the sleeve of Kitchens’ orange Dawg Pound hoodie Sunday were a receiver pass off a reverse and short shovel passes to running back Duke Johnson that looked like handoffs but counted as throws because the foot-long pitches from quarterback Baker Mayfield were forward.


The signature call was the 63-yard pass from receiver Jarvis Landry to receiver Breshad Perriman. Mayfield faked a handoff to Perriman and gave the ball to receiver Antonio Callaway, who pitched to Landry.

“I think we already expect the unexpected,” Landry said of Kitchens. “So we’re never really surprised, but it’s always fun to do new stuff.”

“You know when you’ve got plays like that you’re really shooting all your shots,” Perriman said.

Getting the ball to Johnson was less flashy but just as important. He had gotten the ball three times or fewer in three of the last four games, and the short shovels that served as end-arounds were a way to get him involved and keep the defense off-balance.

Johnson had six catches on six targets for 54 yards and rushed twice for 12 yards.

“It seemed like they were expecting some shot plays out of that,” Mayfield said. “The motion is expecting for us to throw it deep. Obviously, it worked. That is why we kept doing it.”

Since taking over as coordinator and play caller Oct. 29 when coach Hue Jackson and coordinator Todd Haley were fired, Kitchens has earned the trust and confidence of the players by seeking their input and using it in the game plan. He’s also impressed with his own concoctions.

The Browns had gotten sloppy and allowed the Bengals to creep within one score with 2:56 left. Facing second-and-4 with 2:01 left, the offense needed one more first down to finish the game.

Because the clock would stop anyway, Kitchens called for a pass. Mayfield was flushed right and fired a short pass to tight end David Njoku with safety Jessie Bates beside him. Njoku made the catch and rumbled for a 66-yard pickup to seal the victory.

Mayfield wasn’t concerned with the possibility of Bates jumping in front for the interception.

“I have thrown in tighter windows,” he said. “I get your point, though.”

Mayfield followed the completion by staring down Jackson on the Bengals sideline as he jogged, shuffled and backpedaled down the field. Interim coach Gregg Williams said Monday he hadn’t seen the stare-down and added that if he had anything to say about it, it would be to Mayfield behind closed doors.

“It would not be out there for anybody else to talk about,” he said.

While it’s highly unlikely rookie cornerback Denzel Ward (5-foot-11, 190 pounds) will play Sunday in the finale against the Ravens after suffering his second concussion in three weeks, Williams wasn’t ready to rule him out Monday.

“It is still early, but we will do whatever the protocol says to do,” Williams said on a conference call, adding Ward was better leaving the stadium Sunday night than after the initial concussion Dec. 2 in Houston.

Ward was injured against the Bengals when he lowered his shoulder to take on tight end C.J. Uzomah along the sideline. He injured his back in the preseason tackling Eagles tight end Zach Ertz, drawing the ire of Williams for not protecting himself.

“One of the things that is a part of his thing is that change in the style of play at this level,” Williams said. “You have to understand who you are playing against. You can’t be up that high anymore on those kinds of people. He can’t be up there.”

Offensive line coach Bob Wylie remained in the hospital following surgery Thursday to repair a broken ankle. Some of the linemen took him a game ball Sunday.

“It was fun for us to be able to give a game ball to him,” Williams said. “We knew that his heart and his mind were in it with us, even though he couldn’t be at the game.”

** Williams planned to give the coaches Monday night and Tuesday morning off for Christmas before they were to return Tuesday afternoon to prepare for the Ravens.