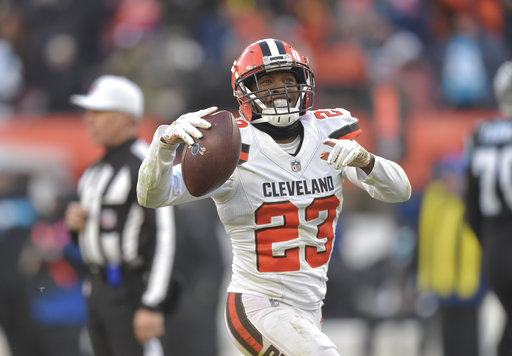 Free safety Damarious Randall has four interceptions, was a key piece in the transformation of the secondary and deserved Pro Bowl consideration.

But his biggest impact came without the ball in his hands.

As the self-proclaimed world’s greatest trash talker, he rarely stops running his mouth. Yet his most powerful statement was made without a word.

As part of the NFL’s My Cause, My Cleats initiative, Randall wore shoes this month designed to promote SAY: The Stuttering Association for the Young.

“Well, I grew up with a stuttering problem,” he recently told a small group of reporters. “I was those same kids.

“Sometimes it just feels like it’s you versus the world. But then when you understand that stuttering is normal, whenever I’m telling them that and they’re looking at me as an idol to them, that’s just giving them hope that they can accomplish any dreams that they want to up in their life.” 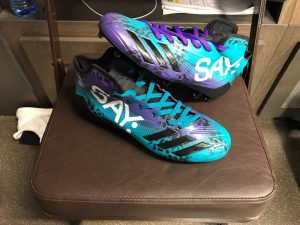 The impact goes well beyond a Sunday afternoon shoe selection.

“When someone like Damariouis is going to speak up about having a stutter and owning it and being OK with that, that can be really game-changing and life-changing for a kid, for a young person who stutters, who might be hiding and feeling like they don’t want to let anybody else know about it and feeling like they’re the only kid on the planet who stutters,” SAY executive director Noah Cornman told The Chronicle-Telegram.

SAY is a national non-profit organization that empowers, educates and supports young people who stutter and the world that surrounds them. Cornman said 70 million people in the world stutter.

As a cornerback for the Packers last year, he took credit for shutting down Browns receiver Josh Gordon.

Before he had played a snap for the Browns after being acquired in a March trade for quarterback DeShone Kizer — one of general manager John Dorsey’s best and most underrated moves — he got on the bad side of Cleveland fans by openly cheering for the Warriors vs. the Cavaliers in the NBA Finals.

With the Browns 3-6-1 and having dropped seven straight to the Bengals, Randall didn’t hesitate to all but guarantee a victory two days before the November matchup, saying Cincinnati would get their “a– beat” if standout receiver A.J. Green didn’t play. Green didn’t play, the Browns rolled 35-20 and Randall again showed he’s not afraid of backlash when he intercepted Andy Dalton, ran out of bounds on the Bengals sideline and handed the ball to former Browns coach Hue Jackson.

Randall said he’s been a jokester his whole life, but he didn’t always express himself with the same ease. He grew up with a stutter and remained frustrated despite years of speech therapy until one morning when he was 17 years old.

Nine years later he won’t be silenced. He barks at quarterback Baker Mayfield during practice, holds court with reporters throughout the week and lets opponents know when he’s made a play on Sundays.

“He’s always bringing challenges to himself, he speaks very highly of himself, and I think that continues to boost his confidence and his determination to be great in this league,” cornerback TJ Carrie said. “And players like that you want to surround yourself with because they always bring positive energy. You never really see him in a bad mood, he’s always energetic, he’s always laughing, having fun and he takes the game and he approaches it in the right manner. We’re glad to have him on the team.”

An argument can be made for Randall as the defensive MVP of the Brows. He’s third on the team with 77 tackles and has nine passes defensed and a fumble recovery, and added stability and playmaking in the deep middle after making the move from cornerback with the Packers.

He fought through a series of injuries in the first half of the season and has shown the versatility to play outside cornerback — covering Tampa Bay’s Mike Evans — or in the slot.

“Randall is a smart, savvy football player,” Panthers coach Ron Rivera said. “He is physical and gets a good beat on the ball.”

“So for him to be able to support that cause and just allow people within that situation to have someone and an idol to look up to, he’s done an excellent job.”

HEART OF THE MATTER

Randall’s journey is remarkable, but the inspiration for kids who stutter isn’t just about being able to talk trash with the best of them. It’s support for boys and girls who may feel alone, different and unheard.

“It’s about embracing who you are and making sure that you’re going to say what you want to say whether you stutter or not,” Cornman said. “Because it’s what you have to say that is really important, not how you say it.”

Randall connected with SAY a couple of years ago, spent time with the kids and related to them. Houston Astros outfielder George Springer is the organization’s national spokesman, and Randall plans to join him for a camp during the summer in New York for a couple of hundred kids.

“I don’t think (stuttering) affected me that much because I’m a very outgoing person, but everybody is not like me,” Randall said. “So some kids really let it take a toll on them because they’re not like other kids at school and other kids are picking on them and this and that. I just had to sit down with a lot of them and let them know it’s OK to stutter and it’s OK for people to wait for you to get your words out, for you to do things slower.

“It’s OK and it’s nothing that you did wrong because a lot of kids feel like it’s something that they did wrong, or a learning disability. For me to just hang out with them and to just interact with them, I feel like that definitely meant the world to them.”

The recognition and support from two high-profile athletes goes a long way.

“It’s a big deal,” Cornman said. “We hear from kids who are inspired by Damarious and they find our camp and they find inspiration in him. The really awesome thing, though, is there’s going to be a lot of people who Damarious and SAY might never really hear from, but their lives are changed.”

On the surface, Randall going from stutterer to Pro Bowl trash talker seems like the story. But Cornman said there’s no cure for stuttering and emphasized the mission of SAY isn’t about solving stuttering but providing and promoting acceptance.

“It’s OK to stutter. That leap is such a hard one for so many people,” he said. “And just knowing that there’s other people on the journey with you can be really game-changing and inspiring.

“The important element of what we’re trying to do with our kids is build up their confidence and make them effective communicators. And that doesn’t mean speaking fluently, that means speaking from your heart and making sure what you have to say is worth listening to.”

Randall is spreading the message. Through words and cleats.