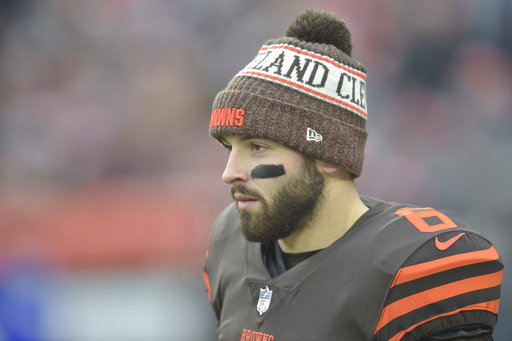 BEREA — Baker Mayfield doesn’t understand why some people don’t approve of his long stare-down of former coach Hue Jackson on Sunday during the Browns’ 26-18 win over the Bengals.

He denied making a lewd gesture in front of offensive coordinator Freddie Kitchens on the Cleveland sideline, despite the video evidence.

He won’t apologize for this behavior on the field.


“Quite honestly, if you don’t like it, whatever. Football is not meant to be a soft game. I could care less.”

Mayfield drew criticism from some in the media for continuing his grudge match with Jackson, who was fired by the Browns on Oct. 29 and took a job on the Bengals staff two weeks later. In the teams’ first meeting in November, Mayfield was quick to cut off pre- and postgame handshakes, explained he didn’t like Jackson going to work for a rival and the next day called him “fake” on social media.

The stare-down came after a 66-yard catch-and-run by tight end David Njoku to seal the victory. Mayfield found Jackson on the sideline and stared at him as he jogged, shuffled sideways and backpedaled down the field for at least 25 yards.

Baker Mayfield. The gift that keeps on giving. pic.twitter.com/2L2AZhZArM

Mayfield, who was voted the team’s Joe Thomas Player of the Year and named AFC Offensive Player of the Week earlier Wednesday, was asked if he’s pushing things too far.

“That sounds like the exact questions I got before the combine,” said Mayfield, referencing discussion about a crotch grab against Kansas and planting the Oklahoma flag after a win at Ohio State. “No. Not one bit.”

The Browns loved his spirit and drafted him with the No. 1 pick in April. His critics often point out the behavior isn’t typical of successful NFL quarterbacks.

“I’m not trying to be anybody else. I’ve been who I am and that’s gotten me here. I’m going to continue to do that because I try to improve every week. I’m not trying to get anybody’s approval. I’m trying to win football games and do this for as long as I can. That’s the goal. And the guys inside this locker room know that. They know I’ll fight for them. They know I’ll take a bullet for them and to me that’s what matters. I don’t have to make any friends outside this locker room. I’m not trying to do that. Once they’re in there, they know exactly what they’re going to get and that’s what really matters.”

After a 1-yard touchdown pass to tight end Darren Fells — the second of Mayfield’s three TD passes Sunday — he stopped in front of Kitchens and made a below-the-waist gesture seemingly to signify his courage.

“I honestly couldn’t tell you. I don’t know,” Mayfield said. “We have a lot of stuff within our locker room, within what we have going on in the offense, a lot of inside jokes. Who knows what it was?”

Mayfield said he didn’t know it had become a thing social media — a tweet with the video was retweeted 19,000 times and liked 93,000 — and was told the gesture was being interpreted as exposing himself.