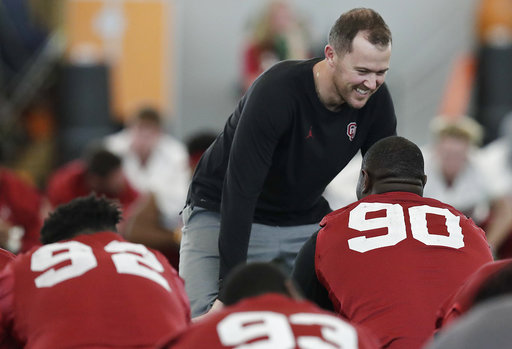 BEREA — If Oklahoma’s Lincoln Riley is telling the truth, Browns general manager John Dorsey can cross him off the list of potential coaching candidates.

Riley reiterated Thursday he’s not interested in making the jump to the NFL at this time.

“I can’t tell you how I’m gonna feel in 10 years but, no, not right now,” Riley said Thursday when asked about his interest in coaching in the NFL, via the New York Post. “If I wasn’t at one of the elite programs in the country, maybe, but, no, I’m very happy where I’m at right now.”

The Browns have been linked to Riley since Hue Jackson was fired Oct. 29.

Riley coached rookie quarterback Baker Mayfield and they remain close. Mayfield said recently Riley would have no trouble making the jump to the NFL. And Dorsey, who’s been tight-lipped about the coaching search, scouted Oklahoma’s two most recent games in person.

Riley said the NFL doesn’t have the advantage over college like it once did for coaches.

“If it was 20, 30 years ago, where there were some major differences, maybe. … The way the college game has evolved, financially it’s a lot better situation now when you compare it to NFL teams,” he said in Miami, where the Sooners are preparing to play Alabama in the playoff semifinals. “We’re at a place where we’re happy, and we don’t take that for granted. I love coaching at Oklahoma, love coaching college football.”

One of the national signing days was last week, so Riley was asked what he told recruits about the possibility of leaving for the NFL.

He was also asked about Mayfield’s stare-down of Jackson on Sunday during the Browns’ win over the Bengals.

“Love it or hate it. He’s always been himself, that’s not going to change.”

Riley was asked if he’d stare back if Mayfield pulled that with him.

“I’d say something back,” he said.

Running back Duke Johnson had at least six catches six times last season on his way to a team-high 74 receptions. When he caught six Sunday in the win over the Bengals, it was just the second time this year he had more than four.

They went for 54 yards and combined with two rushes for 12 yards to give Johnson his third-most productive day of the season. Two of the “catches” were jet sweeps in which Mayfield shoveled the ball forward about a foot. They gained 21 and 7 yards.

He signed a three-year, $15.6 million extension in the offseason after totaling 1,041 yards and seven touchdowns last season. This year he’s rushed 36 times for 180 yards and no touchdowns and caught 46 passes for 426 yards and three touchdowns.

He said it’s been tough not getting the ball as much.

“Somewhat. But I think winning overrides everything,” he said. “I’ll be all right.”

There is a bright side to the lack of activity.

Offensive coordinator Freddie Kitchens had no issue with Mayfield’s sideline gesture toward him that some considered indecent.

“That is something in our room that is an inside deal that is going to stay in our room,” Kitchens said. “It is not a big deal.”

He didn’t agree with those who suggested it could be offensive.

“I like guys that have a relentless pursuit of competition, and they rally around the competition. Sometimes when you are in competition, some things you do, you just do. You do not even know why the hell you do it, but I do not have a problem with Baker.”

The famous RV rented by Mayfield and used by Browns quarterbacks in training camp is for sale.

Neff Brothers RV in Lorain announced it will take offers through Jan. 18 for the vehicle used and autographed by Mayfield. It’s a 2019 luxury Class “A” Forest River Georgetown 377XL motor home. The Neff Brothers said the suggested retail price is $195,000 without the autograph. Mayfield signed the stainless steel refrigerator the day the RV was picked up in August.

** Landry’s 63-yard completion to receiver Breshad Perriman last week was the longest by a non-quarterback in Browns history.

** Kitchens said he wears the bright orange Dawg Pound hoodie on the sideline because his daughters like it.