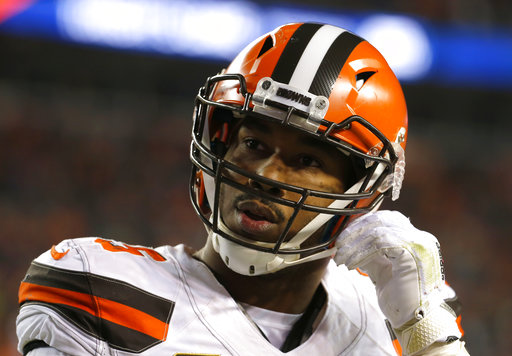 BEREA — Myles Garrett was so close so many times. He had Bengals quarterback Jeff Driskel in his sights repeatedly Sunday yet didn’t register a sack for the second straight game.

“Frustration only fuels me to go get another one,” Garrett said Friday. “So it makes me want to put him on the ground, the blocker really. He can’t hold me if he’s on his behind or if he’s over there sitting on the guard. So I’ve just got to be able to find a way to complete the play.”

He continued his season-long criticism of the officials, blaming them for at least one sack that got away.

“I went back and looked at that one. I thought I just missed it and I saw this strange thing called a holding call,” he said. “I thought they called that in the NFL, but I guess I must be thinking of something else.

“But I probably missed more than my fair share, which is me taking bad angles. There’s some where guys are draped on my neck. I’ve just got to get them off me.”

Garrett is stuck on 12.5 sacks heading into the finale, needing two against Baltimore’s Lamar Jackson to set the franchise record. Sam Clancy had 14 in 1984.

“It’s nice to have a record but it’s even better to have a win,” Garrett said. “It’s team before self every time.”

He’s tied for sixth in the league in sacks and will use the missed opportunities throughout the season as motivation and a teaching tool in the offseason.

Garrett remembered Jackson slipping out a sack when they met in a bowl game in college. If he fails to take down Jackson on Sunday, he’d finish the year with three straight games without a sack.

Jackson will stress every facet of Browns defense

“It is what it is. If I don’t finish with a sack, then I don’t,” he said. “When I get that opportunity, I’m going to rush as hard as I can. I’m going to try to make plays just like any other play.

Steelers All-Pro receiver Antonio Brown posted a picture on Twitter of his jersey with an “S” added to the end. The Steelers (8-6-1) need the Browns to upset the Ravens (9-6) in order to win the AFC North and make the playoffs. Pittsburgh also has to beat the Bengals.

“who else has their #84 @browns jersey ready for Sunday?” Brown tweeted.

who else has their #84 @browns jersey ready for Sunday? pic.twitter.com/09WIfhCKPM

Browns fans are in a lose-lose situation because the hated Ravens or hated Steelers will make the playoffs, but the players are only worried about ending the year with a win.

“I wish we could tie and nobody gets in,” receiver Jarvis Landry said. “Honestly, we want to win the game. If it helps Pittsburgh, then so be it.”

“I just take enjoyment in winning, period,” he said. “That is it.”

Landry, who needs 126 yards to reach 1,000 for the season, revealed he didn’t know the Ravens are the former Browns. He was 3 years old when Art Modell moved the team and assumed the Ravens were always around.

Pro Bowl rookie cornerback Denzel Ward was officially ruled out as he remained in concussion protocol. He suffered two concussions within three weeks and will have missed three of the last four games.

“He has had a really good year, and I am sure that there will be a lot of things that when he steps into the arena next year that he has a good feel for,” interim coach Gregg Williams said. “That first year is night-and-day different from the college game.”

Williams said the decision hasn’t been made whether Ward will play in the Pro Bowl.

** Linebacker Tanner Vallejo (hamstring) was placed on injured reserve. He appeared in 13 games with one start, totaling 20 tackles and a forced fumble on defense and seven special teams tackles.

** Center JC Tretter (ankle) was listed as questionable but is expected to play. He hasn’t missed a snap this season.

** For the Ravens, pass rusher Terrell Suggs (hamstring) was a full participant in practice and listed as questionable.

Defensive lineman Chris Smith played for the Bengals last season when they won at Baltimore in the season finale to knock the Ravens out of the playoffs. Andy Dalton threw a 49-yard touchdown pass on fourth-and-12 with 44 seconds left to pull the upset.

“That’s what we’re trying to do, just have the same feeling as last year,” Smith said.

The Ravens have missed the playoffs the last three years after making them six of the first seven years under coach John Harbaugh. Smith believes last year’s failure could affect the Ravens on Sunday and planted the seed with his teammates.

“I broke the team down and I said, ‘They’re playing not to lose, we’re playing to win. Play to win the game, don’t play not to lose,’” he said. “We’re still playing to have a winning season and that’s what we’re going to do.”

Browns owners Dee and Jimmy Haslam, along with Pete Edwards, issued a statement saying they are “thrilled” to have reached an agreement in principle to assume ownership of the MLS’ Columbus Crew.

** Receiver Blake Jackson (5-foot-10, 200 pounds), a former college quarterback, was elevated from the practice squad. He took the roster spot of Vallejo.

** The Browns had fun in the final practice of the season, with many players swapping jerseys, including Baker Mayfield and Rashard Higgins, Drew Stanton and Landry and Tyrod Taylor and Antonio Callaway.