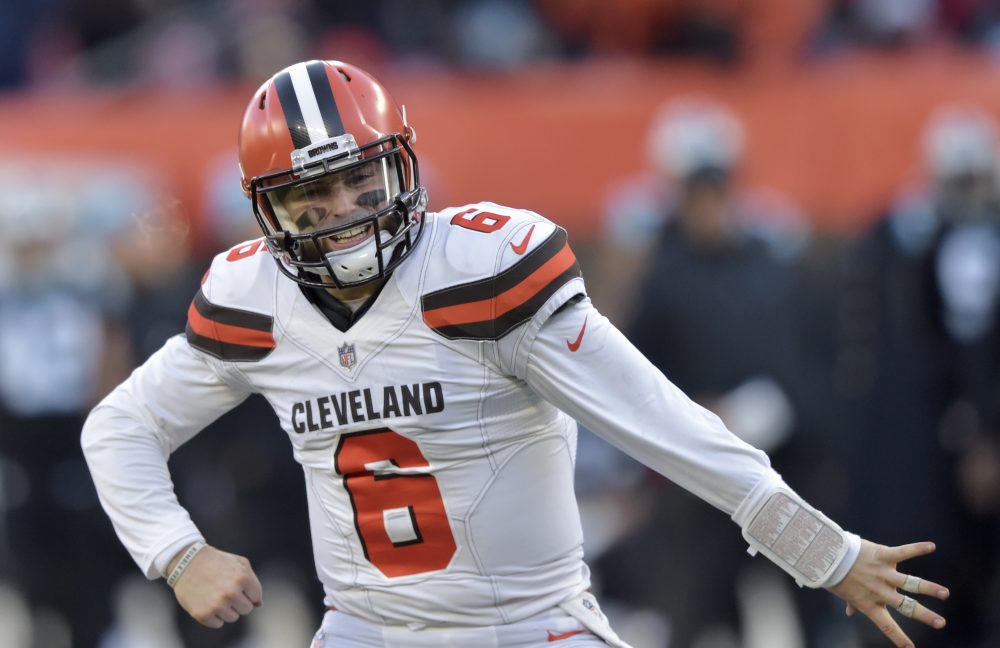 Baker Mayfield has accomplished a lot in his rookie season, after it finally got underway in Week 3. He’s changed the culture, instilled belief throughout the organization and elevated the performance of everyone around him while providing hope and excitement for the future.

The season already qualifies as a smashing success, but there’s plenty to achieve in the finale Sunday in Baltimore.

“It is about us winning and going out on a high note,” Mayfield said.

So much more is at stake.

If the Ravens (9-6) win, they capture the AFC North title for the fifth time during coach John Harbaugh’s 11 years. A Browns upset paired with a Pittsburgh home win over the Bengals would give the Steelers the division title and keep the Ravens from the postseason for the fourth straight year. The Ravens were in a similar position last year and lost the finale at home to Cincinnati to miss the playoffs.

Ravens rookie tight end Mark Andrews knows Mayfield, his teammate at Oklahoma, will use crushing the Ravens’ dreams as motivation.

“He’s a killer,” Andrews told reporters in Baltimore. “He doesn’t mess around. He’s fully intent on ruining our season.”

The Browns can sweep the Ravens for the first time since 2007. They can finish 4-1-1 in the division, the first time with four wins. Mayfield can make a final push to top Giants running back Saquon Barkley for Offensive Rookie of the Year. He would join linebacker Chip Banks in 1982 and Hall of Fame running back Jim Brown in 1957 as the only Browns to win the award.

Mayfield will have to do it against the NFL’s best defense.

They have playmakers at each level, with Terrell Suggs and Za’Darius Smith rushing the passer, C.J. Mosley and Patrick Onwuasor at linebacker and cornerback Brandon Carr and safeties Eric Weddle and Tony Jefferson in the secondary.

“Obviously it has been a top defense in the league for years, but they are playing really, really well right now,” Mayfield said. “They do not just have one thing that they do very well, they do it all.”

Mayfield beat the Ravens in October in Cleveland, but it wasn’t easy. The Browns prevailed 12-9 in overtime, as Mayfield went 25-for-43 for 342 yards, a touchdown and an interception.

Baltimore went to the West Coast last week and held Chargers quarterback Philip Rivers to 181 yards with four sacks, two interceptions and no touchdowns for the first time this season. The Ravens have scored three defensive touchdowns in the last five games.

“They are probably the best defense in the NFL right now, and we have a great challenge ahead of us,” coordinator Freddie Kitchens said. “They are rushing the passer well. They are probably one of the best fronts in football. The secondary guys are covering well. They create mismatches from a protection standpoint.”

Mayfield was sacked five times in the first meeting, and the Ravens are tied for sixth with 43 on the season while ranking fourth with 102 quarterback hits. Mayfield and the line have come a long way since the midseason coaching changes and the switch to Greg Robinson at left tackle, as the Browns have allowed a league-low five sacks since Week 9.

Mayfield, the No. 1 pick, has chased down Barkley, the No. 2 pick, in the Rookie of the Year race with steady personal improvement over the second half of the season and by leading the greatest turnaround in franchise history after 0-16 last year.

With 24 passing touchdowns, Mayfield is two shy of the rookie record held by Peyton Manning and Russell Wilson. He needs 37 passing yards and 11 completions to pass Brandon Weeden in 2012 for the most by a Browns rookie with 3,386 and 298.

Mayfield’s been at his best inside the red zone, leading the league with a 119.0 rating. He made an immediate impact coming off the bench for Tyrod Taylor against the Jets in Week 3, but has been a different quarterback since Kitchens took over as coordinator Oct. 29 when coach Hue Jackson and coordinator Todd Haley were fired. In seven games under Kitchens, Mayfield ranks fifth in the NFL with a 71.0 completion percentage, first with 8.5 yards per attempt, sixth with 16 touchdown passes and fourth with a 111.4 rating.

But he was shaky in the most recent road games that featured heightened intensity. He threw three first-half interceptions in a 29-13 loss to Houston on Dec. 2 and missed a variety of throws in a 17-16 win in Denver on Dec. 15.

A playoff atmosphere awaits in Baltimore, so Mayfield needs to settle in quickly and limit early mistakes in a game expected to be physical and close with limited possessions and a premium on field position.

“Anytime that you play a division opponent, taking care of the ball is the most important thing,” Mayfield said. “A lot of that is momentum. But I still have to be myself. I still have to let is loose and play fearless, make those throws that I have been making and trust our guys to make those plays.”