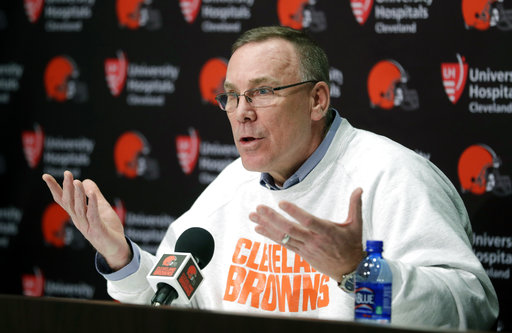 BEREA — General manager John Dorsey is leading a coaching search for the first, and perhaps only, time in his career.

He’s not going to rush it.

“I don’t think you can put a timetable on this one,” he said Monday in a season wrapup news conference. “You’ll know when it’s the right guy, that’s all I’m going to say.”

They reportedly also have interest in talking to former Colts and Lions coach Jim Caldwell and Steelers offensive line coach Mike Munchak, and have reached out to former Packers coach Mike McCarthy. The team wouldn’t confirm the reports or any interview requests.

Dorsey said he will start the interviews Tuesday with interim coach Gregg Williams, who went 5-3 after replacing Hue Jackson on Oct. 29. Offensive coordinator Freddie Kitchens, who took over the role when Todd Haley was fired an hour after Jackson, will also get an interview on an unknown date.

Despite pleas from some fans and media members, Dorsey isn’t ready to keep the status quo, even though Williams and Kitchens led the organization’s best stretch of football since 2014.

“We talk about doing our due diligence and what’s best for this organization. Why not go and look at everybody?” he said.

Owners Dee and Jimmy Haslam put Dorsey in charge of the search after Jackson was fired following a 3-36-1 record in 2½ seasons. Dorsey leads a committee that will interview the roll call of candidates, as it looks for the ninth full-time coach since 1999 and fifth since the Haslams took control in 2012. Dorsey will turn to the Haslams for approval once he’s made a choice.

“We have spent six weeks very methodically and diligently trying to put this whole thing together in terms of what’s best for this organization moving forward,” Dorsey said. “And hopefully we’ve earned the trust from ownership when we make a recommendation with them that we feel that this is the best coach, hopefully we’ve earned that trust and they respect that.”

Dorsey, who took over for Sashi Brown in December 2017, stressed the importance of making the right hire. He updates his list of potential candidates monthly, but his criteria haven’t changed.

“You want a man of character,” he said. “A guy who can instill leadership into these young men, a guy who’s a collaborative thinker, a guy who’s a continuous learner, a guy who’s consistent on a day in, day out basis, who those players can look up to and go, ‘You know what? I’ll follow that guy anywhere.’

“We want to get this right for the Cleveland Browns organization and for everybody within Cleveland. We’re going to get this thing right.”

Dorsey was highly complimentary of Williams and Kitchens and hasn’t ruled them out, but his words and actions made it clear he won’t settle just because the team played much better in the second half of the season.

“I do want to commend Gregg Williams for the job he’s done the last eight games,” Dorsey said. “Gregg and his (staff) have done a really nice job of teaching and developing and getting this team to understand what winning is all about and going to achieve some of those wins.”

Williams, a longtime defensive coordinator, went 17-31 as head coach of the Bills from 2001-03. Dorsey said Williams has “paid his penalty” for his leading role in the Saints’ bounty scandal but there are things he wants to learn in the interview.

“You have to kind of step back, and that’s what the guys upstairs are going to do,” he said. “They’re going to look for the best thing for the next five, 10 years.”

Kitchens’ rise to head coaching candidate has been stunning. He had never been a coordinator or play caller before Oct. 29 but quickly developed a great rapport with rookie quarterback Baker Mayfield and led an offensive resurgence.

“He’s earned that,” Dorsey said of the interview. “He’s done a nice job in his role as offensive coordinator and I think this organization wants to get to know him a little bit better.”

“He’s a guy that truly wants to win before anything else and that’s what we need here,” he said.

If Kitchens doesn’t get the head coaching job, Dorsey won’t make the next coach keep him as coordinator. He said he’ll make suggestions, but the new coach must have the authority to hire a staff.

Dorsey wouldn’t say whether he’d try to persuade a college coach to make the jump to the NFL but said Mayfield won’t play a role in the interview process. He reiterated the job is “very desirable” given Mayfield, defensive end Myles Garrett, a young roster, a wealth of salary cap space and draft picks, a loyal fan base and committed ownership.

“There’s a bright future with this organization and hopefully they can see what we see here,” Dorsey said.

“I’m going to keep saying it, we trust Dorsey and we trust this staff upstairs to make the right decisions for us and put us in the right position to win,” left guard Joel Bitonio said.