Notes: Myles Garrett gives himself a B-minus for year, says franchise sack record will be his 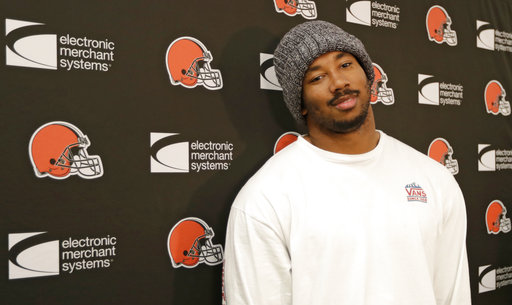 After 13.5 sacks, three forced fumbles and 44 tackles in his second season, he awarded himself a “B-minus.”

“It is a good year,” he said Monday as players cleaned out their lockers after the season ended Sunday with a 26-24 loss in Baltimore. “It was not great. It was not bad. Right there in the middle.”

He called the 13.5 sacks “all right.” They ranked seventh in the league and were a half-sack off the franchise season record of 14 set by Reggie Camp in 1984.

“It happens,” he said of falling short of the season record. “I know that I will take it out eventually, whether it is next season or years down the line. Preferably next year.”

“I knew I could always do it,” he said. “Really, the injuries have been a surprise for me knowing that I’ve been healthy for most of my life, not having any injuries to hold me back. But it’s really just kind of showing other people and everybody else that this is the usual me. This is what you’re going to get, even greater further down the line.

“So a couple of injuries here and there, but I don’t think anything like that will happen again where I miss extended time like that.”

Garrett was matter-of-fact when discussing the likely coaching change on defense. Interim coach Gregg Williams was coordinator for both Garrett’s seasons but isn’t expected back.

“It is what it is. It’s a business,” Garrett said. “I know the guys in the room that I’ll be playing with. I know they’ll come back bigger, stronger, faster and we’ve got confidence in each other and chemistry already built, so whoever comes in (as coach) we’ll learn that system.

“If we stay with who we’ve got, we’ve already shown that we can play with the best, so no matter what happens, I’m confident in this team.”

He seemed to have a stronger opinion when asked about a new coach possibly wanting to switch to a 3-4 defense. He’s a natural defensive end but would probably be asked to switch to outside linebacker in a 3-4.

“I guess I’ll just have to go play safety,” he said. “I’ll play wherever he puts me at. I mean, that’s what I did this year, and that’s what I’ll continue to do.”

Garrett said he’ll take a week off then start working out for the Pro Bowl. He was voted a starter for the Jan. 27 all-star game.

“I have a lot of respect for those guys,” Dorsey said, also complimenting their position coaches. “Would I like to have them back? You bet.”

Robinson was signed after minicamp in June and didn’t start until midseason, taking over for undrafted rookie Desmond Harrison. With Robinson in the lineup for the final eight games, the Browns went 5-3 and allowed a league-low five sacks.

Left guard Joel Bitonio thinks Robinson, the No. 2 pick of the Rams in 2014, can be the long-term answer at the pivotal position.

“This eight-game sample was pretty impressive for him,” Bitonio said. “He improved throughout the time. He showed why he was the second overall pick. He is athletic. He is strong. He has more tools than any of the other O-linemen that we have on this team — him and Des both, actually.

“If he can continue to push himself and if he does re-sign here, which I hope they do, and he just still has that mentality of trying to improve himself, I think he will be fine.”

Quarterback Baker Mayfield was a huge supporter of Robinson and left a parting gift in his locker — an autographed No. 6 jersey with a personal message.

Perriman, a former first-round pick of the Ravens, was also a pleasant surprise. He signed Oct. 13 after a string of injuries at receiver and caught 16 passes for 340 yards, a 21.3 average and two touchdowns.

Rookie running back Nick Chubb had 1,000 yards. Then he didn’t.

A 5-yard loss with 6:42 left in the fourth quarter Sunday dropped Chubb to 996 yards for the season. He didn’t get another carry as the Browns tried to play catch-up.

“I didn’t realize that until after the game obviously, but that’s a tough way to go out.”

Chubb, the No. 35 pick, didn’t start until Week 7 after Carlos Hyde was traded. He entered Sunday with a franchise rookie-record 972 yards but rushed only nine times for 24 yards, a 2.7 average.

“They have some big boys inside, and I think their goal was to shut down the run, and I think Baker was having some success throwing the ball,” Bitonio said of Baltimore’s defensive front.

Ogunjobi, who was injured Dec. 2, said the pain was so great after games he couldn’t raise his arm but would be better by the next week. He doesn’t want to risk surgery and plans to rely on rest and recovery.

“If you get surgery they’ve got to drill a bone, I didn’t want to do that,” he said of the reattachment procedure. “There’s a chance the bone might break because it gets brittle.”

He finished with 5.5 sacks.

“Certain things you have to play through, especially when your teammates need you,” he said. “I just felt like they needed me so I played through it.”

Tretter was injured Oct. 14 against the Chargers and had a few setbacks but didn’t miss a snap for the second straight year. The five-year veteran called it his best season.

“Two years straight and not missing a snap was my goal, that’s a big one to check off the list,” he said. “I think overall I played very well.”

** The opponents for next season are set. The dates and times will be announced in the spring.