Commentary: Nothing riding on Dorsey’s coach search except everything 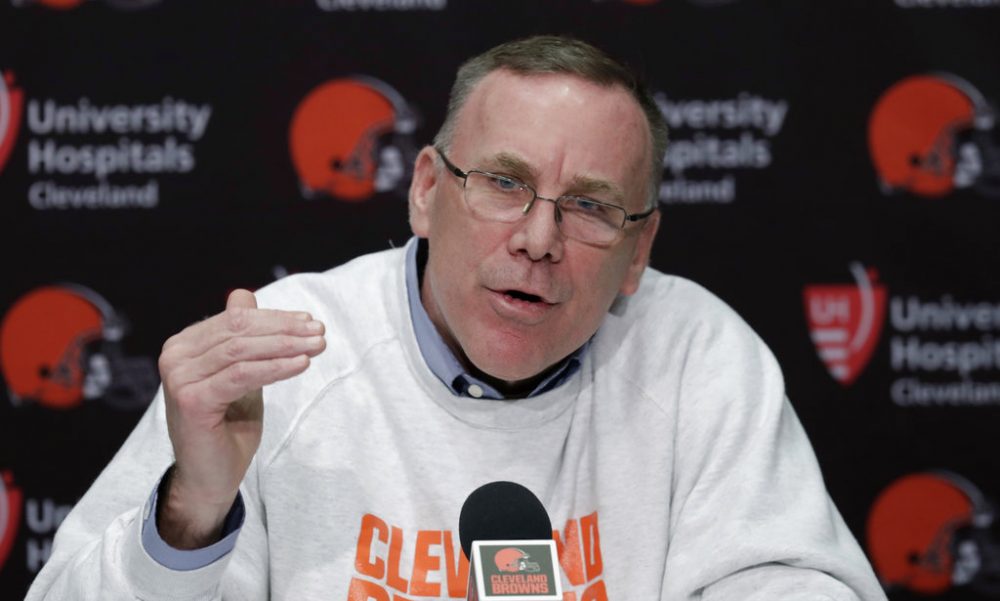 The honeymoon continues for John Dorsey, and why shouldn’t it? After years of building nothing out of something, the Browns finally hired an architect with a clue. In his first year on the job Dorsey made a silk purse out of a sow’s ear, a mountain out of a molehill.

Now, however, Dorsey must ace his biggest test yet. One that will either push the Browns over the hump and back into the promised land, or it won’t, which would take much of the luster off Dorsey’s sensational rookie year.

His draft was a five-star extravaganza.

His free-agent signings and overall roster construction were exemplary.

The fact that he wears old school Browns sweatshirts all the time proves that he’s a man of the people, and has the pulse of Dawg Pound Nation.

But now comes The Big Decision. The most important hire of all. It’s Dorsey’s crack at painting his masterpiece, creating his magnum opus. Meanwhile, as the interview process begins, an anxious fan base holds its breath, watching, waiting, and wondering …

Can Dorsey find the Terry Francona of football coaches?

For all the good that Dorsey has done since coming to Cleveland, can he find someone capable of making all that good he’s done even better?

We’re about to find out. The stakes are enormous. All that’s riding on this coaching hire is everything.

Let’s put it this way. Dorsey is the only person standing between this monumental decision and the owners who thought it would be a good idea to bring back Hue Jackson for one more year.

Dorsey and his coach-search posse are tasked with the job of finding a coach capable of taking the Browns where they’ve never been: to the Super Bowl.

It’s a job fraught with speed bumps and chuckholes, with dead ends and dead beats. However, unlike the last several times the Browns wandered naively into the corral of the head coach wannabes, this time the Browns actually have something of value to sell — themselves!

Most NFL coach vacancy handicappers — a profession bursting at the seams this time every year — rank the Browns’ coaching job as the best of the vacant bunch. They already have in place a franchise quarterback, a bunch of young, talented, hungry players, and plenty of cap space.

There is a buzz about the Browns that sells itself to coaching candidates. This creates a pool of candidates limited only by Dorsey’s imagination. It also creates a jungle of thorny decisions.

Wouldn’t Gregg Williams, after his dazzling stint as interim coach, be an automatic no-brainer choice for permanent coach if Dorsey, who presumably took the general manager’s job with the understanding he would eventually be allowed to hire his own head coach, wasn’t part of the equation? Probably. But Dorsey is. And because he is, Williams seems like a longshot.

Assuming he doesn’t get the job, wouldn’t it be incredibly awkward for Williams to return as the defensive coordinator?

If Williams doesn’t get the head coaching job, do the Browns risk losing him to another team as a head coach? Would they care?

If the Browns pass on Freddie Kitchens for the coaching job, what if he returns as offensive coordinator, and orchestrates an even better offense next season, and then gets hired by another team as a head coach?

Do the Browns hire an offensive coordinator as their next coach, bypassing Kitchens, who seemed to have such a good rapport with Mayfield?

Would hiring an offensive coordinator as head coach marginalize Kitchens’ impact on the offense, assuming he remained on the staff in some capacity? If so, would that risk a regression in Mayfield’s performance?

Did the Packers fire Mike McCarthy sensing a case of coaching burnout? Or does McCarthy just need a change of scenery to follow the lead of Andy Reid (from the Eagles to Chiefs) in proving older coaches can have successful second acts to their careers?

With the Browns seemingly on the verge of a breakout season next year, with a legitimate chance to reach the playoffs, isn’t that an argument for hiring someone who has experience as an NFL head coach?

As attractive as the Browns’ coaching job is, there’s a lot going on here that makes this particular coaching hire more complicated than a traditional coach search. Much of it is a result of the midseason purge of Jackson and offensive coordinator Todd Hayley.

That gave Williams and Kitchens the chance to assert themselves in new roles, which they did. Fabulously. But that also muddied the waters for Dorsey, who was probably pleased yet somewhat surprised by the dramatic turnaround.

Browns-Ravens Preview: 4 things to watch; 3 key numbers; the pick
Commentary: Browns’ history of drafting quarterbacks has a few hits — and lots of misses