Commentary: Browns’ history of drafting quarterbacks has a few hits — and lots of misses 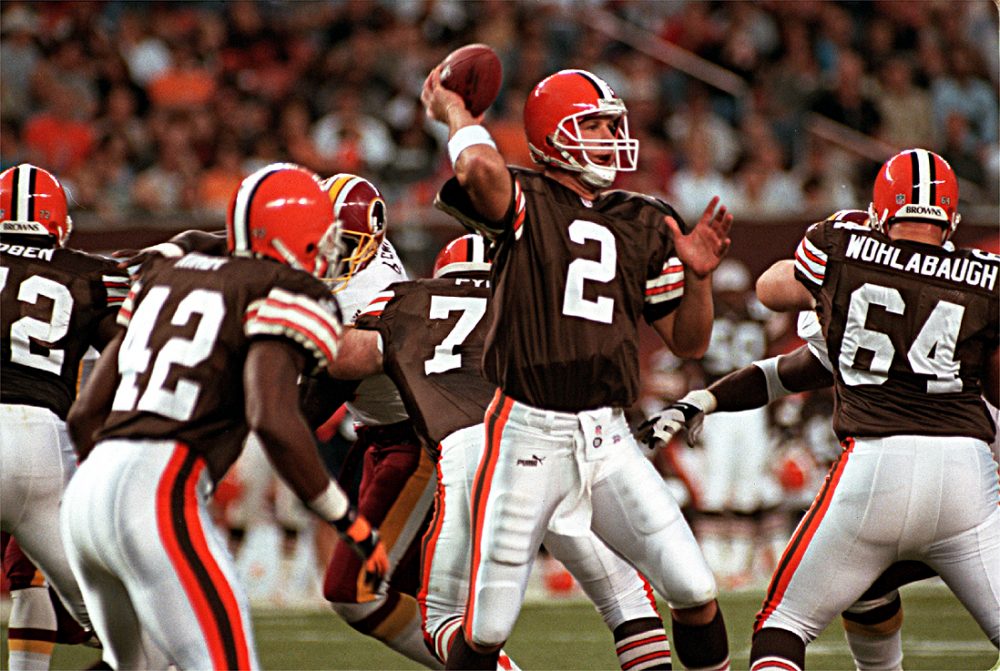 As Coach Search 2019 begins to intensify for the Browns, be glad that The Great Quarterback Quest is finally over — and not a decade too soon.

Baker Mayfield has put an emphatic halt to those proceedings. His arrival and emergence as a franchise quarterback and lovable loose cannon interrupts one of the longest and most futile scavenger hunts in NFL history.

That would be, of course, the Browns’ inability to draft a quarterback worth drafting.

Now that the Browns have actually found one, and as a sort of celebratory climax to Baker Mayfield Appreciation Season, let’s take a shallow dive into the grim and gruesome history of the Browns’ woeful wanderings through 60-plus years of NFL Draft forests, searching in vain for that rarest of bipedal species: quarterbackus maximus.

Of those 48 quarterbacks drafted by Cleveland, only two were selected to the Pro Bowl: Brian Sipe (1980) and the exquisitely named Milt Plum (1960-61).

Eighteen of those 48 quarterbacks were selected by the Browns in the first three rounds of the draft. Two of them were Mayfield and Plum. The others: DeShone Kizer, Cody Kessler, Johnny Manziel, Brandon Weeden, Colt McCoy, Brady Quinn and Charlie Frye. That’s just in this century.

It’s not like the Browns weren’t trying. In 1952, they drafted Agganis in the first round and Klosterman in the third round. But they were just getting warmed up. In 1965, they drafted three quarterbacks in the span of six rounds.

Counting Mayfield, the Browns, in the last 68 years have drafted eight quarterbacks in the first round. The others: Manziel, Weeden, Quinn, Couch, Phipps, Garrett and Agganis. Garrett didn’t last long with the Browns, who cut him after they found out he had a severe stuttering problem (nice scouting!).

The Browns have only drafted one quarterback from Ohio State and one from Michigan. You probably haven’t heard of either. The OSU quarterback was John Borton in the 13th round in 1955. The Michigan quarterback was Bob Ptacek, an eighth-rounder in 1959.

Leaving no stone unturned, they have also drafted quarterbacks from such powerhouses as Grand Valley State (Steve Michuta, 8th round, 1982), Evansville (Randy Mattingly, 4th round, 1973) and Clarion (Jim Alcorn, 11th round, 1968) — none of whom played a single down in the NFL.

The most interesting quarterback ever drafted by the Browns was the one they drafted in 1950 — Butch Songin, from Boston College. He was also a two-time All-American hockey player in the late 1940s. He never played for the Browns due to a knee injury suffered in college.

However, he did play two years in the Canadian Football League, where he won the Grey Cup with Hamilton in 1953. In 1960, he was a 36-year-old rookie with the Boston Patriots in the brand-new American Football League.

Songin started the first game in Patriots history and quarterbacked them to a 13-10 loss to Denver. The Pats were patsies, going 5-9 that season.

Commentary: Nothing riding on Dorsey’s coach search except everything
Analysis: 5 challenges facing Freddie Kitchens in 1st job as head coach