Freddie Kitchens “really wanted to compete” for job, and GM John Dorsey breaks down the search 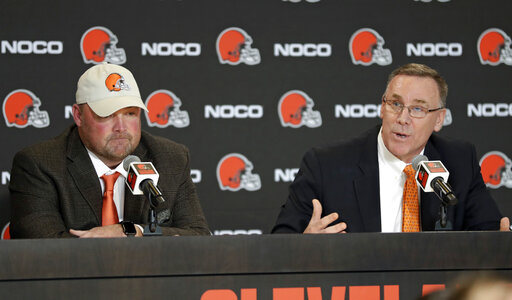 In fact, he encouraged it.

“I wanted a thorough search,” Kitchens said Monday. “I really wanted to compete against everybody that wanted this job. I wanted it. I wanted to go in and state my case.”

He walked out the winner.

Kitchens was introduced at FirstEnergy Stadium as the 17th full-time coach in Browns history. He emerged from the crowded field.

Kitchens grateful he can be himself with Browns

Vikings offensive coordinator Kevin Stefanski, 36, was the other finalist and the only other candidate to interview twice.

“He was organized, he was detailed, he was collaborative,” Dorsey said of Stefanski. “He had a really nice broad vision. He was a young guy.”

Dorsey explained the decisions not to go with the coaches with more experience and more impressive resumes.

“Gregg is a heckuva coach,” he said. “What we were looking for is the future of the organization.”

Dorsey, Wolf and Highsmith won a Super Bowl with McCarthy in Green Bay, which would’ve made for a natural fit. But McCarthy never officially interviewed, didn’t get the Jets job and will take 2019 off.

“We had really nice discussions about him,” Dorsey said. “But at the end of the day, what was best moving forward? And this is the decision we came up with.”

McDaniels interviewed with the Packers, didn’t get the job and will remain with the Patriots. Last year he agreed to take the Colts head coaching job but backed out at the last minute. Dorsey said that wasn’t an issue.

“Absolutely not,” he said.

Dorsey repeatedly said the decision to hire Kitchens was about the long term but denied Arians’ age played a role.

Arians, 66, had publicly lobbied for the Browns job but was hired by the Buccaneers.

The Browns changed the organizational structure with the hiring of Kitchens. Dorsey, DePodesta and former coach Hue Jackson reported directly to ownership, but Kitchens will report to Dorsey.

“There is a belief of a traditional structure model in place and sometimes I think that is best,” Dorsey said. “Freddie and I are going to make an unbelievable amount of decisions together in unison, because we are such likeminded in our thinking. We are going to have daily and weekly conversations with ownership.”

The committee met for nine weeks to identify qualified candidates and narrow the list. Dorsey said it sought leaders of men, guys with integrity and who were secure, open-minded, collaborative in their thinking, intelligent and had good football acumen.

Dorsey acknowledged Kitchens wasn’t on his personal list of candidates when Dorsey replaced Sashi Brown in December 2017 but was included “very early on” in this process. Then he impressed everyone in his eight games as coordinator to end the season.

“What was wonderful is he had a full display of his resume at work there for eight weeks,” Dorsey said. “At the end of the process, unanimously, we all felt that Freddie was the right fit for this organization moving forward.”

Freddie Kitchens grateful Browns let him be himself, says it took “guts” to hire him and he won’t let them down
Notes: Trust and respect key to Freddie Kitchens’ relationship with Baker Mayfield