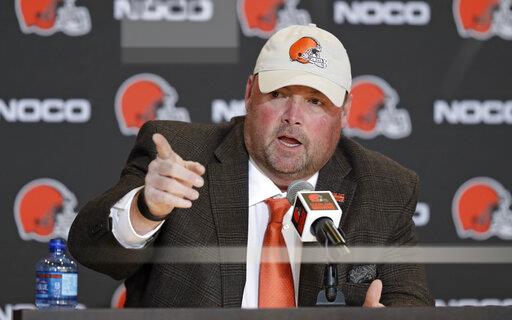 CLEVELAND — The full-house backfield isn’t going anywhere. The clever misdirection, motions and play-action fakes will stay in the playbook. And receiver Jarvis Landry better remain ready for anything.

Kitchens’ success as play caller and coordinator over the final eight games played a key role in the organization’s decision to hire him as head coach. He first raised eyebrows when he called plays for the first time in his career in the preseason finale.

“We walked away from the fourth preseason game in Detroit going, ‘He just did that, didn’t he?’ And he made it look easy,” general manager John Dorsey said Monday after introducing Kitchens as coach. “Play calling is an art and just when you sit and talk with him you just know. We knew it was the right decision.”

Kitchens says it took “guts” to hire him, won’t let down Browns

Hanging onto the play-calling duties didn’t prevent Kitchens from landing the highly respected and sought-after Monken. He was a strong candidate to get the Jets’ head coaching job and interviewed elsewhere to be coordinator but picked Kitchens and Cleveland. The move was announced Monday morning.

“He made a decision based on people. Our decisions here are going to be made on people.”

As a first-time coach it was important for Kitchens to hire an experienced staff. With Dorsey helping with the candidate list, Kitchens is off to a strong start.

Steve Wilks was hired as defensive coordinator after going 3-13 in his lone season as Cardinals coach. He was coordinator for the Panthers in 2017 and will keep the 4-3 system installed by former coordinator and interim coach Gregg Williams.

Mike Priefer was picked as special teams coordinator after eight years in the role with the Vikings, and James Campen left Green Bay after 15 years to be associate head coach/offensive line coach.

Ryan Lindley was named quarterbacks coach. He joined the Browns in October as running backs coach after the coaching changes at midseason. He’s a former NFL quarterback who spent recent years training quarterbacks for the draft, including Carson Wentz, Jared Goff and Mitchell Trubisky.

Kitchens and Wilks need to assemble a defensive staff, and Kitchens hasn’t settled on receivers and tight ends coaches. Adam Henry could be retained to coach the wideouts.

“I would rather wait and get it right than hurry and get it wrong,” Kitchens said.

Monken was coordinator in Tampa Bay the last three years and called plays for its top-ranked passing offense in 2018, but coach Dirk Koetter was fired after the season. He was head coach of Southern Mississippi from 2013-15, inheriting a winless team and going 9-5 in his final year.

Kitchens said the terminology will remain the same from the system coordinator Todd Haley installed last year — it’s easier for Monken to learn the wording than everyone else to adapt — but the playbook and game plans will be a collaborative effort among Kitchens, Monken and the offensive staff.

“He’ll mesh with what Freddie’s doing,” Dorsey said. “But I think what is really interesting about this is that’s going to be a great offensive room to be in, some of the ideas that’ll be generated, because Todd is very creative with a lot of his offensive package stuff. I would love to sit in that meeting on Monday, Tuesday, Wednesday, just watch them install a game plan because they’re both very creative.”

Wilks, 49, was a longtime defensive backs coach, including 12 years in the NFL, before he became coordinator with the Panthers in 2017. He was also assistant head coach for three years.

“When I see a guy that has a tremendous football acumen, is very diverse in his ability to use personnel, then why wait?” Kitchens said of hiring Wilks. “It is everything that I want, so we didn’t wait. And I like guys that strive to be great and I think that Steve does that. I also like guys that strive to have an environment of learning and strive to have an environment of listening, being together and being a part of a team.”

Dorsey said Kitchens’ likability, intelligence and ability to earn respect attracted the strong staff, and its experience will help Kitchens navigate the in-game management that can be difficult for a first-time head coach.

“I think that helps eliminate the distraction and clutter for Freddie and makes us a better oiled-machine,” Dorsey said. “As Freddie has said, if he doesn’t have the answer to something, he’s going to find it. And why not surround yourself with guys that are in this together for the we factor?”

Updated: Freddie Kitchens makes important hires: Todd Monken as OC, Steve Wilks as DC, James Campen as OL coach
Freddie Kitchens grateful Browns let him be himself, says it took “guts” to hire him and he won’t let them down