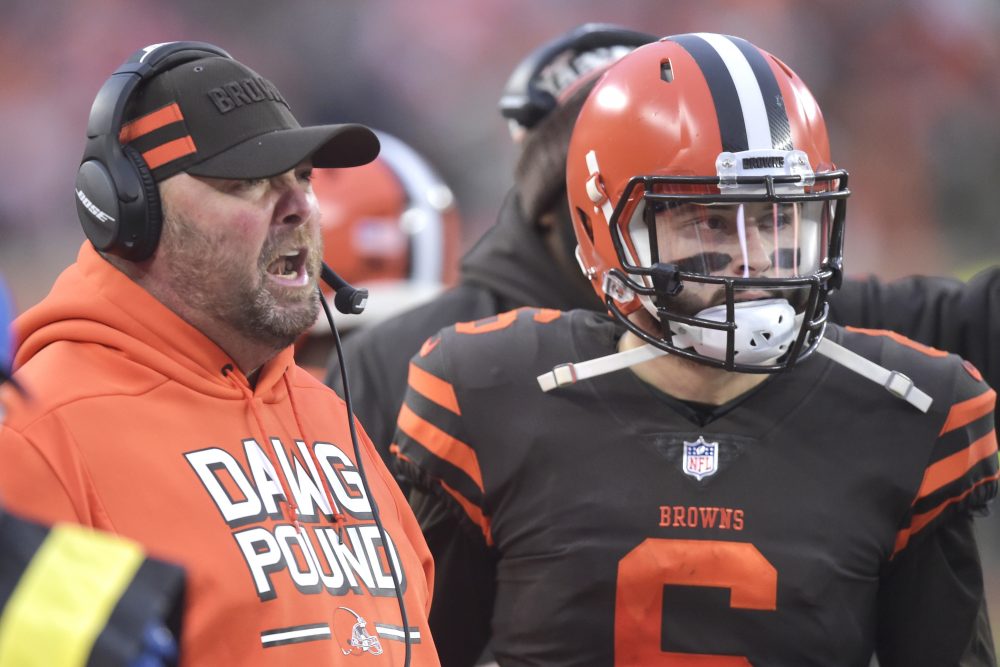 BEREA — Freddie Kitchens probably wouldn’t be coach of the Browns without Baker Mayfield.

They connected over the final eight games, and combined to lead the Browns to a 5-3 record after Kitchens took over as offensive coordinator and play caller. Mayfield’s level of play soared under Kitchens, as the rookie put up numbers that rivaled the best quarterbacks in the game.

“The No. 1 thing would be trust and respect,” Kitchens said Monday of their relationship. “You earn respect by them knowing you know what to do from a verbal or scheme (perspective). You earn trust by talking and figuring out who the person is. When you tear away all of the façade, who is the person and what makes him tick?

“Once you get to know the person, it enables you to have tough conversations. Those butt-chewings, those are the ones that get them better. And sometimes they need confidence. But you have to tear away the facade and see what the kid needs and then you can get him better. And then the relationship forms.”

In his six games before coach Hue Jackson and coordinator Todd Haley were fired, Mayfield completed 58.3 percent with 1,471 yards, eight touchdowns, six interceptions, 20 sacks and a 78.9 passer rating. In eight games under Kitchens, he improved to 68.4 percent, 2,253 yards, 19 touchdowns, eight interceptions, five sacks and a 106.2 rating.

“Baker is a rookie. He still has a lot to learn in the National Football League,” general manager John Dorsey said. “Freddie is going to get him to that plateau along with a lot of other coaches on that staff.”

Dorsey said Mayfield didn’t play a role in the coaching search and that Kitchens is charged with leading 53 players. Kitchens said he and Mayfield have something in common.

“I am not a finished product,” he said. “I do not think I have made it. You haven’t made it. Nobody has made it. I told Baker this.”

New special teams coordinator Mike Priefer served a two-game suspension in 2014 with the Vikings after an independent investigation into claims he made a homophobic remark during the 2012 season. The investigators found corroboration, and Priefer apologized for the “insensitive remark.”

Priefer was born in Cleveland. His father, Chuck, started his coaching career at Padua High School in Parma before eventually making it in the NFL as a special teams coach. He coached Dorsey with the Packers in 1985.

An important position on any staff is the offensive line coach. The position demands precise individual technique as well as cohesion and timing from the group of five.

The Browns hired James Campen, who spent 15 seasons with the Packers, coaching six Pro Bowlers since 2010. He’ll also have the title of associate head coach.

“Again, he is ‘We instead of I.’ He’s a great developer of young offensive linemen. He’s a good evaluator of talent. I see him and Freddie hitting it off unbelievably. They’re likeminded in how they approach the game. All he wants to do, like everybody else here, is win.”

Dorsey’s five-year career with the Packers ended before the 1989 season due to a knee injury. Campen, 54, played his first season in Green Bay in 1989.

Kitchens hasn’t coached defense and didn’t spend much time last season with the players on that side of the ball. But he started to form a bond with Pro Bowl defensive end Myles Garrett over the pool table.

“I’m invested in people. That’s how you start building relationships,” Kitchens said. “Do I know everything about Myles? No.