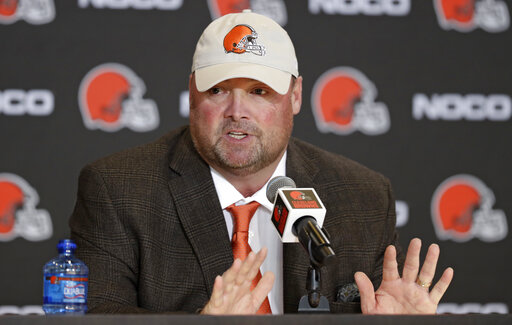 New coach Freddie Kitchens drew from the NFL, CFL and college football as he rounded  out his staff.

The Browns announced seven new hires and two holdovers Friday. Many of the moves had been previously reported.

Kitchens says it took “guts” to hire him, vows to not let down Browns


Here are highlights from their resumes:

** Whitt has coached in the NFL for 12 years and won a Super Bowl with Green Bay. He was the Packers’ pass game coordinator last season after serving as secondary/cornerbacks coach for nine years.

He was Carolina’s linebackers coach from 2013-17, working with All-Pros Luke Kuechly and Thomas Davis.

** Jones will enter the NFL after 17 years in the Canadian Football League, where he won four Grey Cup titles and was Coach of the Year in 2018 for the Saskatchewan Roughriders.

** Lupoi is also a first-timer in the NFL. He spent 11 years coaching in college, the last five at Alabama. He was co-defensive coordinator in 2016 and ’17 and coordinator this season.

He was a defensive lineman at Cal.

** Lilly has coached for more than 25 years, mostly in college. He was assistant to the head coach last year at the University of Tennessee.

His NFL experience was in 2016 as Rams tight ends coach. He’s also worked at Georgia and Florida State.

** Parrella hasn’t coached in the NFL but played defensive tackle for 12 years, reaching the Super Bowl with the Bills and Raiders. He was a second-round pick of the Bills in 1993.

** Henry joined the Browns in 2018 after two years with the Giants. General manager John Dorsey has repeatedly sung his praises.

** Walker was hired by the Browns in 2017 after four years with the Jaguars. He helped rookie cornerback Denzel Ward earn a trip to the Pro Bowl.

Henry and Walker joined Kitchens and Ryan Lindley as the holdovers from last year. Lindley was hired as running backs coach in October and moved to quarterbacks coach after Kitchens was hired as coach.

The NFL reduced quarterback Baker Mayfield’s fine for a sideline gesture Dec. 23 against the Bengals, according to multiple reports.

Mayfield was originally fined $10,026 for unsportsmanlike conduct but appealed. The league reduced the fine this week to between $1,600 and $1,700, a healthy savings for the rookie.

After throwing a 1-yard touchdown pass in the second quarter, Mayfield ran toward Kitchens and made an indecent below-the-waist gesture apparently informing Kitchens how much courage he has.